Provided by and published with the expressed permission of: the Author

Bobby Mohammed is no longer with us. He made an extraordinary contribution here, that was distinct, and transcending. It was in the realm of the qualitative. The soul. This man moved you. You did not have to be a musician. He could twist and turn you emotionally. Even competitors loved and revered him. Town bowed to him, a South man. Renegades opened their yard to the band when they needed a place to store their pans, having played mas in town in the 60s. This is Renegades when they acted the part, the home of Dr. Rat, Papito, and other Lawbreakers. Protecting Bobby and his band. 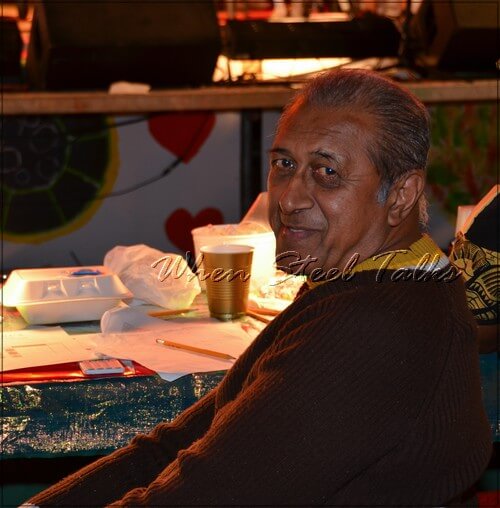 Listen to the very first bars of strumming in Guiness Cavaliers’ piece “Kiss of Fire” and you are transfixed. Cavaliers (or simply “Guiness”) was a splinter band, an off shoot from Gondoliers, which was a rather belligerent band, prone towards Steelband clashes. I know because Southern Marines, our Marabella band, would have been their nemesis. But Bobby was not interested in steelband fight culture. He heard something else. So, he and a group of his followers moved away to form their own band.

In 1965, with the band no more than two years old, and he only 22, this precocious youth dropped a bomb in the panorama prelims in the Queens Park savannah, that remains a marker in pan annals. They played the calypso “Mas” by Lord Melody. No other band had played that, because no other arranger had the ear that Bobby had for what would work. All the big North bands, including Despers, and Panam North Stars were there.

How do you know that something extra-ordinary happened in the savannah that day? Well, people who were not there talk about it as if they were.  And a standard way in which they do so, is to say that they were on their way home from the savannah as Guiness started beating, and they had to run back when they heard the bass (base). It is true, that they beat at number 42 that year, the very last band in the prelims. They were a southern band, it would not have seemed to be worth the while to hang around. But sweet pan is sweet pan.  The legend of Guiness Cavaliers and Bobby Mohmmed was born in the savannah that prelim day. They came back in town a few days later to win the finals.

Excellent, moving appraisal of the vivacity of the  work  of Bobby Mohammed, a true soul-dier, May he rest in Power and Pan. Thank you Professor Lewis!