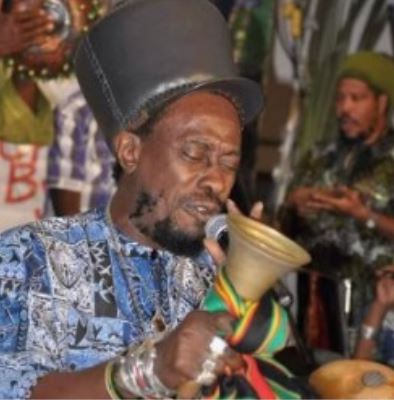 Brother Resistance was and is an original. It is not easy to be an ‘original’ in today’s world, but he found the courage and conviction to express his originality. I met him in the early 1970’s on the UWI campus. When Birdsong was formed in 1973, he played a double guitar pan, but it was as ‘Brother Resistance’ that he made his mark.

In the aftermath of the 1970 Black Power Revolution, Afrocentric iconography was an outward expression of fundamental inner change. Dashikis, afro hairstyles, local hand-made jewellery and leathercraft, typified that outward expression of an inner pride in blackness and African heritage.
On the UWI campus in the early ‘70’s, Brother Resistance, Slinger, Shortman and the Network Riddum Band were a staple in that journey of self discovery for so many. At that time, African drumming and chanting was increasingly popular, but Rapso was something new. The Rhythm of the word, the power of the word, the rhythm of the drum and the rhythm of the steelpan combining in a celebration of self-worth.

The dialect was embraced and explored and phrases like ‘Iz wot?’ became a part of the campus sub-culture. Though we experienced it on campus, Rapso’s origins and inspiration were from Laventille and the social and political dynamics that was playing out in urban communities like Quarry Street.

When Brother Resistance graduated from UWI, he went to work at the Central Bank for a while but soon transitioned to setting up his version of Black entrepreneurship, rooted in music, clothing and art and craft. The shift from Central Bank Tower to Drag Mall stall was neither simply pragmatic or merely symbolic, it went deeper than that. Rapso was not merely ‘cultural’ or apolitical, it unapologetically represented the poor, the unfranchised and underrepresented. It undertook a responsibility to ‘Ring a Bell for freedom’ with ‘Mother Earth’, ‘Dancing Shoes’ We Cyar Take Dat, being amongst some of the other more memorable Rapso ‘advocacies on behalf of’. Bro Resistance’s role as President of TUCO is yet another dimension of that self-same advocacy on behalf of celebrating our Trinidad and Tobago originality as a pretext and a tool to do better.

Brother Resistance you stood tall and defined a space and a pathway. Your contribution will surely outlive you. Thank you for the memories and reference points. You were and are indeed an original. Love and Empathy to your immediate family and that other family who you adopted and who adopted you! Farewell and Nuff Respect!