I received an e-mail from the Ministry of the Arts and Multiculturalism requesting an E-Pan on loan for a display that they were putting together for participation in an expo in Surinam. The presentation was a display of pan from its inception to present. They also indicated that the display was attending an expo in China subsequently. I indicated to the officials making the request that I would loan them an E-Pan for the Surinam display but I did not want the E-Pan to be included in the China expo. They obliged and indicated that several parts of the exhibition would be returning to Trinidad and not going to china, so the stage was set.

I am turning to the community now to ask for your help in finding the E-Pan as after over one year of requesting the return of the loaned E-Pan the ministry finally informed me in person that the E-Pan was "apparently" lost. I know that the pan community is quite resourceful and it's feelers have a long reach. So, if anybody finds or has heard of anyone who has found a lost E-Pan please contact me or the Ministry of Arts and Multiculturalism so that this can be resolved

I thank you all in advance for your help. 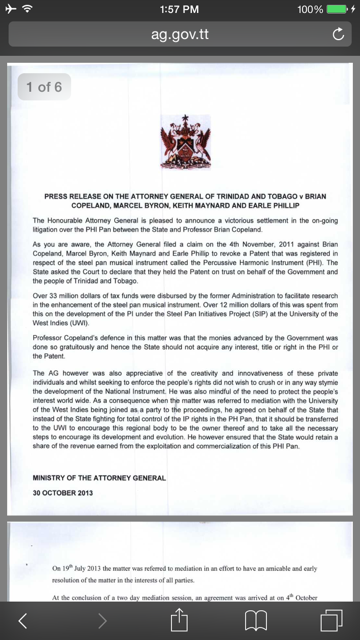 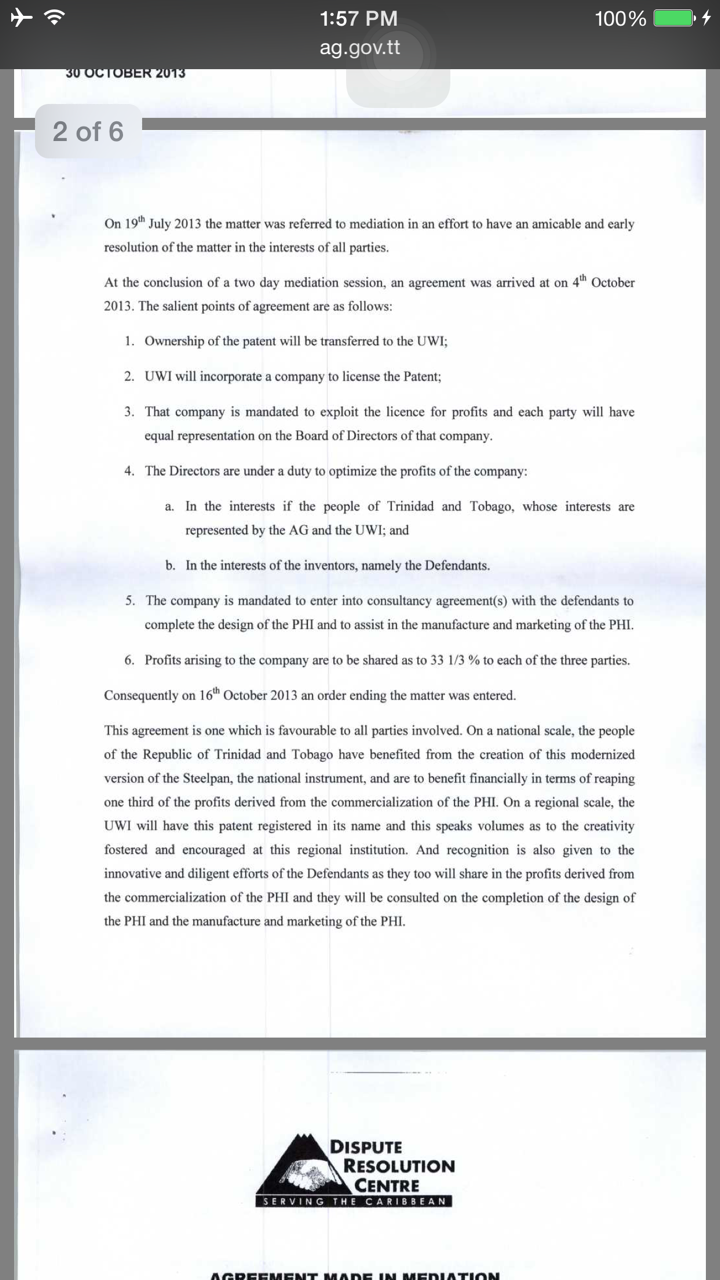 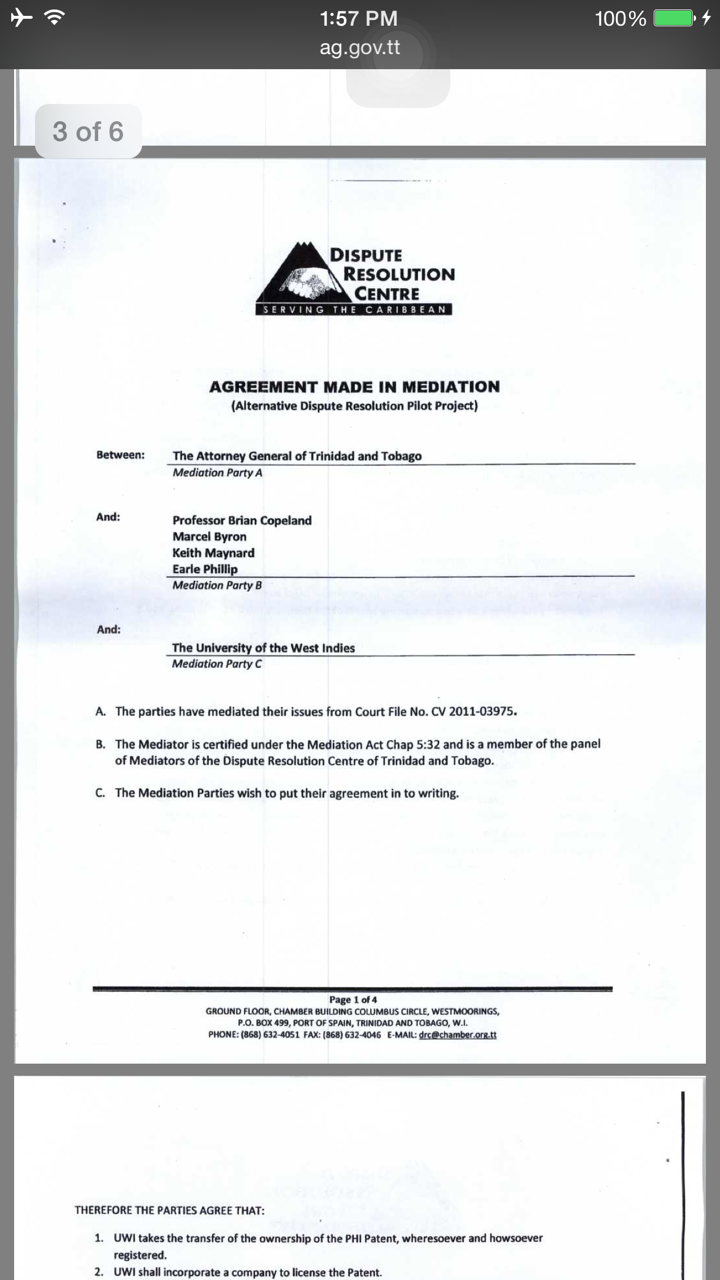 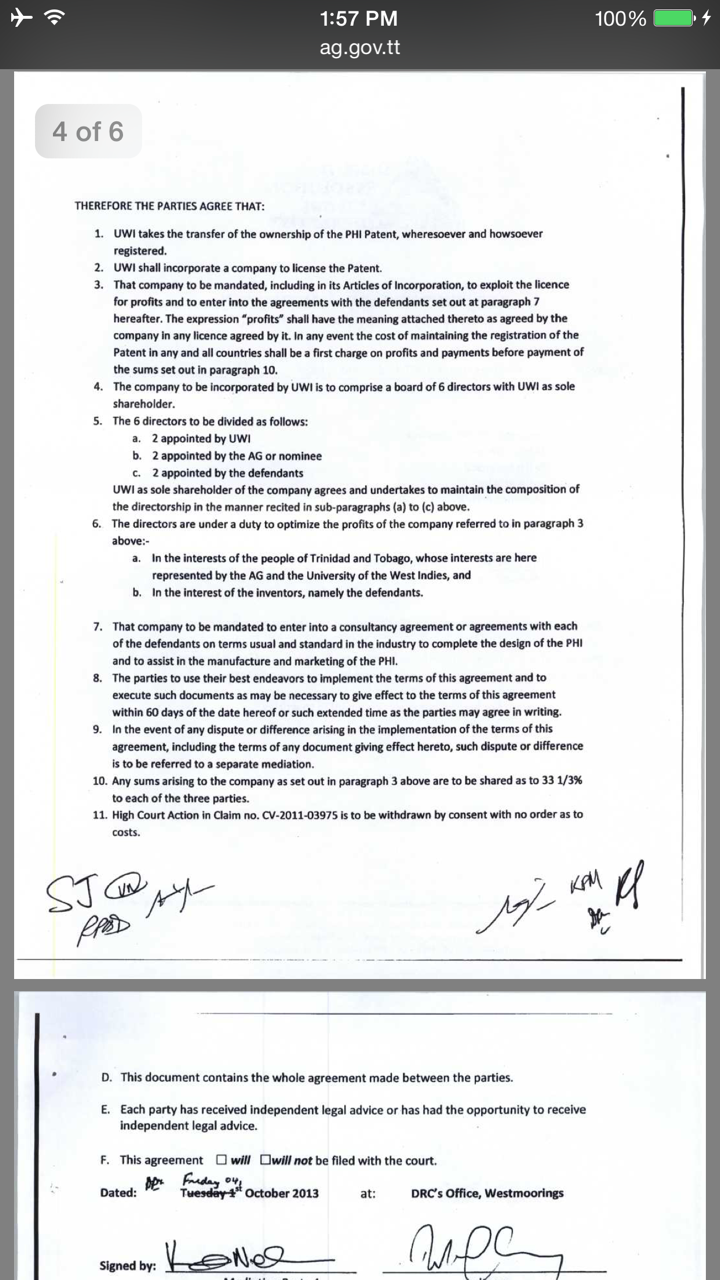 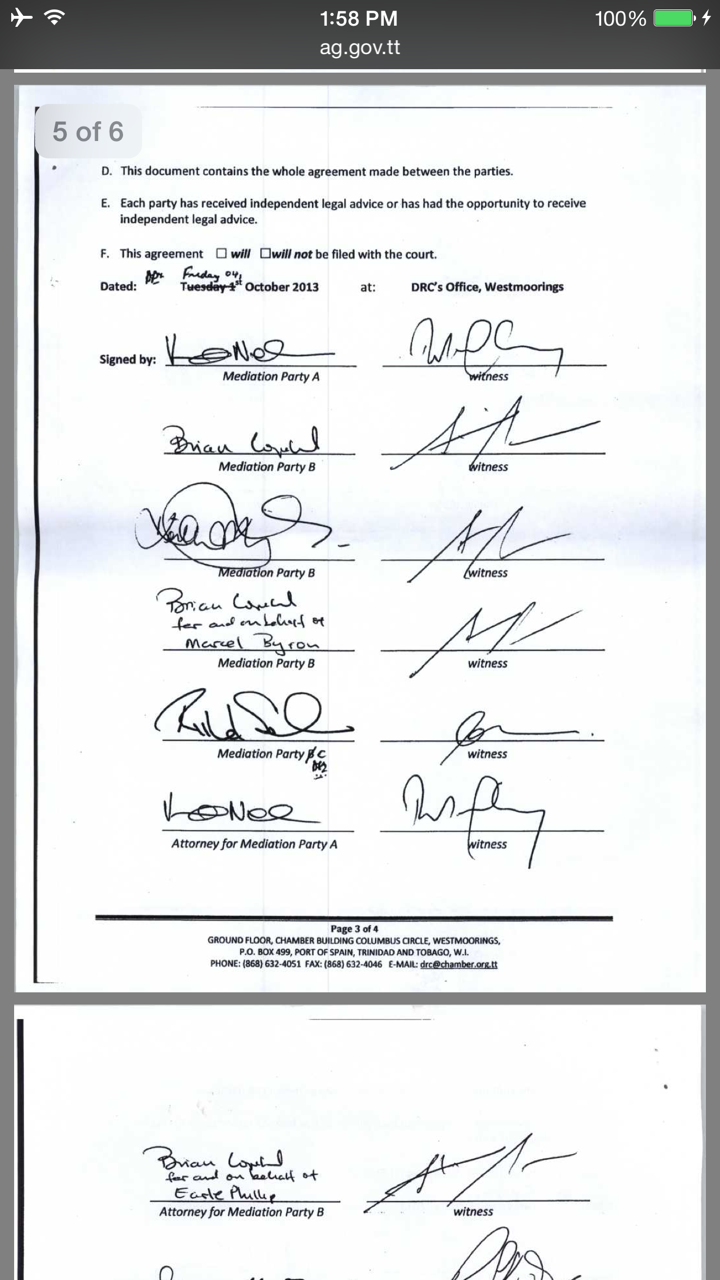 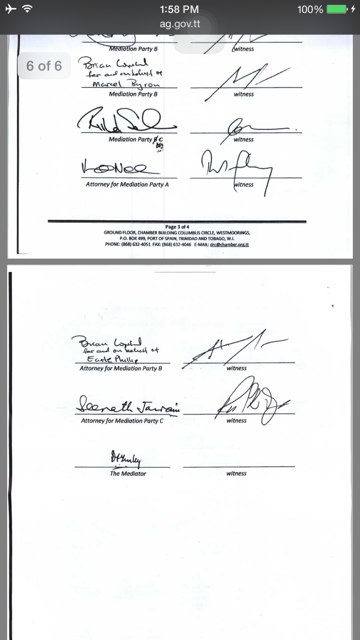 Layer-by-layer, year-by-year, I will continue to expose the distorted facts that you feed to the pan community at-large the world over.

Above is documentation which shows that the ownership of the phi and the gpan is now spilt three ways, (33-33-33 percent), shared between UWI, Government of T&T and BC & company (former PANADIGM).
Since back in 2010, on this very WST forum, I mentioned to everyone listening, that if the Government of T&T invest millions into a project while the R&D work was done on the premises of UWI, using their resources, how on earth can an individual(s) take ownership and put select names on patents forming a private company (PANADIGM) and have the nerve to not only receive millions in compensation, but also to have the audacity to accept the highest award in the land for steelpan (individually), when all the knowledge you gained from Anthony William, Jomo and Wiltshire etc. was used to "re-create" and patent the g-pan.  When Anthony Williams and Bertie Marshall had not even received their long-overdue awards, until then pan community protested and Pan Trinbago spoke up to correct the matter.  There is no way that you should have been standing on the same stage as these real steelpan pioneers.  We all know is because of your school-friends with political connections in high places, why this happened.
So hence the reason now as the documents I posted above shows, I must say you made a smart-man move by electing to go to mediation, because you would likely have lost in full court.  I must say, what that has now done, is implicate both UWI and GORTT, in the event moves are made to continue developing the phi, the law suit will not be on your shoulders only.
Please don't get me wrong, you, the Government and UWI can develop the phi and put it market, but you have to be licensed by the Utility Patent holder of the E-Pan.  Else you will be infringing.
You said, that you were among the least paid from the millions invested by GORTT, but clearly the AG pulled all the documentation and pulled all the facts, hence the reason it triggered a run for mediation.  When somebody is not in the wrong, they not 'fraid to go the distance to prove their innocence.

It could just as easily be purchased by "someone" or a pseudonym to gain access to the technology to circumvent, but in a sense I understand your points...

I wish you luck. Many years ago I persuaded Prince Batson, an early captain of Trinidad All Stars to loan the then Ministry of Culture his priceless mint condition collection of early instruments, for a display in the north building of the Financial Towers. Up to the last time I checked with Prince,  now deceased, they were not returned.

There is a warning for anyone who has collector's material in these 2 unrelated stories. There is also a lesson about US/WE and our disregard for our history at official levels.

Both the PanKat and PHI have not copied your technology in any way. Especially in the case of the PanKat, Theie technology they used is much older than your efforts by as many as 25 years or more. They started back in 1985. Their electronic drum technology was used to apply it to the concept of the steelpan. The steelpan concept is not Patented. (only the G-Pan is and that is an innovation of a public domain idea of the original steelpan invention) anyone can make a steelpan however he wishes. Patents do not cover ideas. It covers exact descriptions, scope, technology, system applied on registering the Patents.  It is mainly used for persons who you wish to do business with making your E-Pans or selling them. For instance you can license Yamaha or Sony to sell and also manuacture them for and on behalf of yourself. You can them sleep at nights while making money. It people like you who has Yamaha, Sony and others doing well and making millions. You can pick a company and have them manufacture it and sell it. Then you make the best use of your Patents.

Patents are not won on the concept that someone copied your idea of making electronic steelpans. mental Ideas are not covered in Patent law.  Anyone can make electronic pans which will have to be quite different in design and technology and also appearance as well. The method of making them is also a difference recorded by the Patents. So Patents suits are not easily won. It isn't any walk over winnings. Not at all. The cost to win a patent outright is in the millions in legal and other fees. I think that you are wrongly advised by lawyers wishing to extract fees from you. They usually do that especially with Patent challenges. For you to win a Patent, you will have to prove that someone stole your actually prototype or manufactured product, copied it in detail usibg the same technology and design, shape, software. hardware materials down to the plastic used on the outside and the note shapes and rubber derivative used for the notes. It has to be exactly the same. If there is one difference down to note shape, you can lose your case. Speaking of which your present predicament adds to your misunderstanding of Patent laws. For instance if Patent offices know that you lent a manufactured product for free and most likely no written agreement recognizing your own responsibility to warn people of its protection in law and other responsibilities of the borrower, the Patent offices can take that irresponsibility on your path into account. Now that's bad business. For instances your missing E-pan could be any where now being copied. And someone may not copy it cent percent. They may make some differences. That someone could be a large technology company like Yamaha who could make your E-pan in one month time and mass produce it in 6 months, sell 100,000 of them in the next six months.for $1000.00 Us dollars each complete with pan software and other musical sounds software far better than what you have on your E-Pan. Meanwhile you waist time seeking out PHI and PanKat inventions. Does that make any sense? So simply swallow your pride and cut a major deal with a big technology company and bring down the prices o the E-Pans. you will then be able to mash up everyone else in that way. That's how its done by big businessmen. They don't waste time with Patents. The world and time is too short. Suppose a big nuclear war is broken out in two weeks time. It bombs major cities in the US and the US fires back and the whole thing wipes out major cities elsewhere, where is the Patent Law? And this is highly possible now. So make your returns and move on in life.

Riff Jammz, I have one question here, how come the PHI and PanKat  people never did what you are advising the E-Pan people to do?