Searchlight - St. Vincent and the Grenadine Members of the Starlift Steel Orchestra pose for a photo after winning the 2019 community-based category at the annual National Junior Panorama competition at Victoria Park. Inset is band leader Kingsley “Hero” Roberts.

The competition was so tight in the 2019 St. Vincent Electricity Services (VINLEC) community-based steel bands competition on Sunday, that one point separated the first and second place winners as well as the second and third placed bands.

And with a score of 257, Starlift Steel Orchestra once again took the community-based bands title, ably led by band leader Kingsley ‘Hero’ Roberts and playing “Take me” by Rassum Shallow.

“I am happy for the youths; they are the ones that did it,” Roberts told SEARCHLIGHT after the results were announced at Carnival City, Victoria Park.

He said he is not sure exactly how many times Starlift has won the junior pan title, but he knows that the band has lifted the trophy about, “20 something times.” 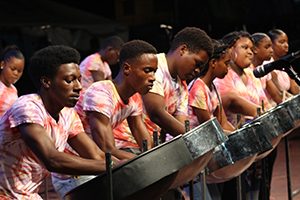 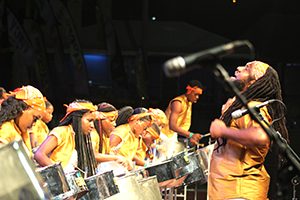 In second place was Syphomnix Steel Orchestra with 257 points. They did “Rude Gyal Posse” by Winston Soso with Jomoro Francis as their band leader.

The Sion Hill Euphonium Steel Orchestra with 256 points was third. They played Blacksand’s “Afro Caribbean’ under the leadership of arranger Tilal Webb.

In the fifth position was the Rose Bank North Stars who had 175 points and gave the audience a rendition of “Amen” by Delroy “Fireman” Hooper.

Congratulations to all the bands