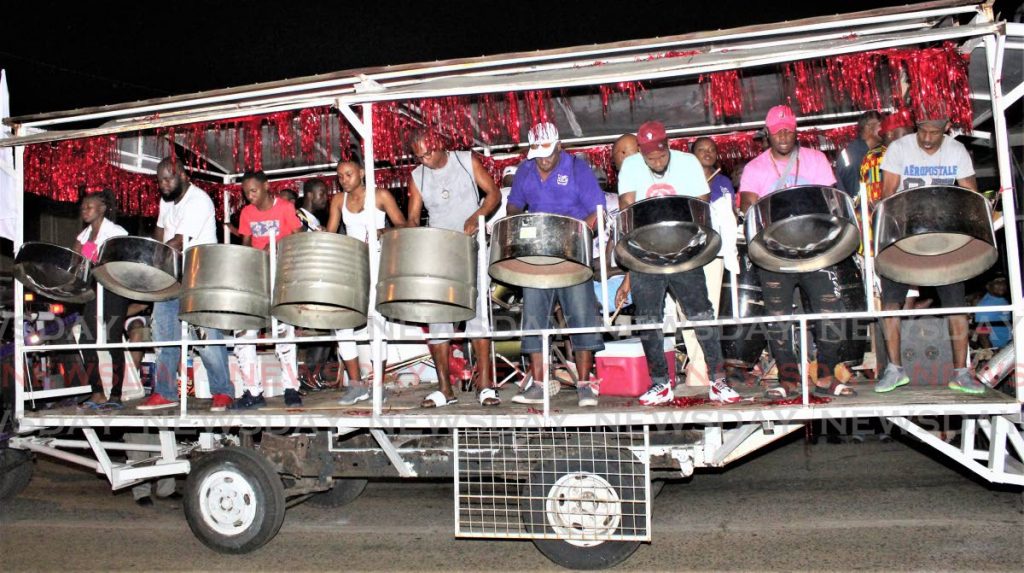 With the pressure of the National Panorama competition behind her, Pan Trinbago’s president Beverley Ramsey-Moore enjoyed the sweet sounds of the steel pan on Tragarete Road, Port of Spain, on Carnival Monday night.

The event was a joint venture between Pan Trinbago and the St James Carnival Improvement Committee where a Steelband Bomb competition, with the theme Keeping Pan in Carnival, was organised for the first time.

According to Ramsey-Moore, “This is an opportunity for the smaller bands to come out and try to earn some money. After the Single Pan finals they have nothing to do so this is for them. As we speak the same thing is happening in San Fernando and Arima.

“The Eastern Region in conjunction with Mayor Lisa Morris is in charge up there while the South Central region of Pan Trinbago is doing their thing in south.”

Ramsey-Moore said each region got $100,000 to organise their competition.

The hit of the night was the World Wide Steel Orchestra which performed How Great Thou Art in honor of late pan pioneers Hugh Borde and Neville Jules.

For the dearly departed...from the MASTER at WORK.

Another item added to the checklist of ACCOMPLISHMENTS for Madam President.

Great is thy FAITHFULNESS...

The videos I saw of this was pathetic. People who were there also question if this is what pan reach too.

Cecil Hinkson: Sometimes YUH TOO HONEST!!! If BIG MEN cyar realize that BEVERLEY RAMSEY-MOORE have ah direct PIPELINE to NEWSDAY that she does use to BIG UP HERSELF and PUSH HER PROPAGANDA -- then they should not even TRY TO ARGUE WITH ME. If they cannot observe that on DEY OWN (redundancy to SHELL DOWN my point)!!!

Anyway, YUH TOO HONEST -- yuh SHOULDA STAY WITH THE SHEEP and SING PRAISES to the PRODUCTION!!!

Permalink Reply by merrytonestothebone on February 26, 2020 at 1:26pm

Cecil...you could talk till 2021 Panorama start in November this year...As long as it have money to make on the road for carnival me and my band Icewater will ensure we in the mix...If all dem big band love Panorama so much what else yuh expect? Yuh really think they will be interested in the small money on the road?...You see pathetic...I see dollars...And ah doh have to a crackshot either...

merrytonestothebone: I eh see DEM VIDEOS but it sounding as if you (and ICEWATER) was in that "PATHETICISM" -- TELL WE HOW MUCH DOLLAR$$$$ yuh make nah!!!

Ah have to send CECIL HINKSON to TRUMP SCHOOL so he could learn what BLIND LOYALTY is all about.

Permalink Reply by merrytonestothebone on February 26, 2020 at 8:12pm