Should the Panorama champs visit the White House if invited? 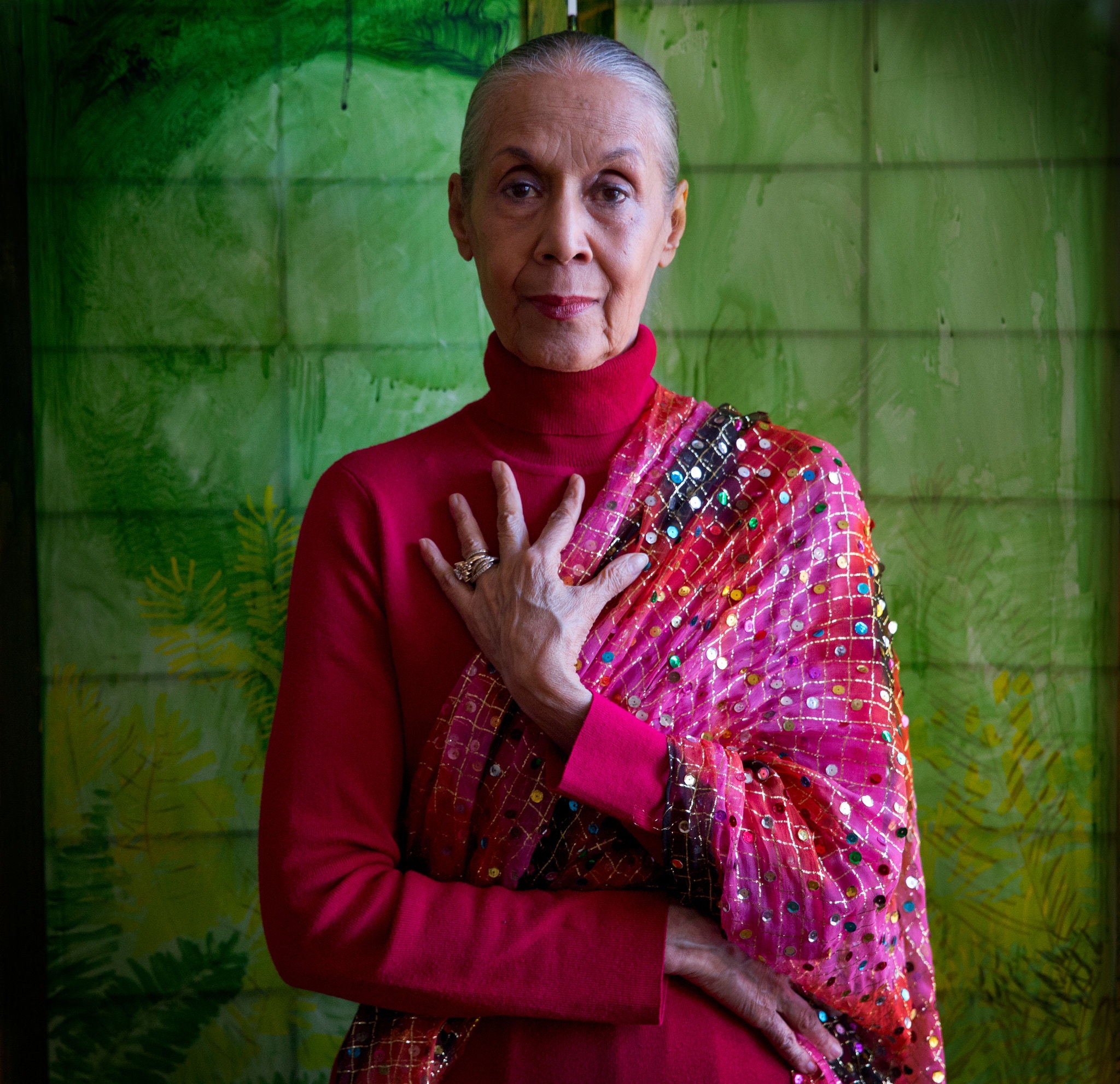 “I have never, ever, ever voiced my opinions that way before, because I’m not a political person,” said Carmen de Lavallade, 88, a black Creole actress, dancer and choreographer, who was among the first to spurn Trump.

In August 2017, she announced she would not attend a traditional White House reception for performers honored annually by the Kennedy Center. That prompted Trump and the first lady to respond by skipping the awards event.

“It’s like he opened Pandora’s box,” said de Lavallade, who had performed for President Lyndon B. Johnson. She cited Trump’s equivocations in denouncing the marchers in a white supremacist rally in Charlottesville for prompting her decision.

PAN needs all the GLOBAL RECOGNITION and PRESS it can get.

I wouldn't be caught dead around the White House while Putin's buddy is there.

But I'am sure there are some who would unfortunately.

Wow, what an interesting question.

It really depends on the band and the country they are from. And can they take advantage of the recognition either way from a marketing stand point.

Steph Curry didn't go and call the guy in the white house an ass. That has really made his brand and star even brighter off the court. Lebron said he would never go and called the guy in the white house a bum. It has only helped his brand. Steve Harvey went and now everyone is asking why is that idiot still on TV.  Samuel L. Jackson's stock keeps rising and he continues call the Donald every bad word in the book.

Desperadoes and Phase II should not go. The notoriety and world prominence that they would receive for not going  is definitely worth it - particularly with the young  people and stars in the entertainment world. Going would hurt them more than not going.

Trinidad All Stars, Silver Stars, are not really known as boat-rockers. Their fans might be get upset if they don't go. But other that I don't see how it help them world-wide unless they are looking for a few gigs from the Republican party.

Now Renegades and Invaders can go either way. I don't see how it would help their brand and popularity in the long term.

Every other band Trinidad and Tobago would probably go with the exemption of Pamberi. And that would be correct decision on their part. They would become the talk of the world given their history.

I'm not sure what Exodus would do but they are better prepared to take advantage of the exposure they would get than anyone else.

No New York band should go. But I'm sure they would want to. The street cred they would obtain with the Cardy B's, Jay Z's and young people in the US would be much more useful than a mention in an inside column and a White House tweet.

Most of the UK bands would go except maybe Mangrove because of their history and struggle.

All the other island bands - Grenada, St. Lucia, St. Vincent, Antigua, VI and others would go.  I don't think the Jamaica steelband would go.

As for solo performers, I can only think of maybe two players that I think would not accept an invitation to this current White House.

Absolutely not, this is only a photo op for Trump. He does not care about third world countries (don’t forget he addressed third world countries as shithole countries, so exactly why are we even giving this any thought)nor what they have to offer, not interested in our culture. This will be a photo op for a few minutes and we will be cast aside just like he treats Puerto Rico, minority island even though they are part of the United States, go figure. Trinidad does not need that kind of publicity. Our steel pan is well recognized all over the world and yes we can continue to promote without his help, that is negative energy, forget it.

The racial divisions which the Trump Administration has championed may end when he's fired.  But the boycotting under Trump is noticeable and nothing really new.  Conversely, Tiger Wood's record of accomplishment is amazing, but the opportunistic use of the moment by Trump for political gain is patronizing and many think Tiger should have "passed" on it on principle, especially considering what the controversial behaviour of POTUS has meant to many minorities and has sparked even more controversy and criticism.  Not all recipients are equal are they and times have defintely and definitively changed, ent...

Allyuh from TRINIDAD and allyuh complaining about divisive RACIAL POLITICS -- LORD HAVE MERCY.

When last allyuh read the LOCAL NEWSPAPERS in THE MECCA?

Talk 'bout mixing guava and mango.  There is a distinct and real difference between racial as opposed to racism.  Continue to press for Trumps calls to MAGA, seen...

A photo-opt to die for, nothing like attending a dinner at the White House for the CHAMPIONS...

The Clemson football team could also win a national championship in competitive eating, if President Donald Trump is to be believed.

The Tigers visited the White House on Monday night and were treated to a spread of fine American cuisine from McDonald’s, Wendy’s, Burger King and Domino’s—served up on silver platters beneath gold candelabras.

The drive-thru menu was served because Trump’s government shutdown has limited staff at the White House.

Trump proudly showed off the heaps of fast food before the players had a chance to dig in, boasting that he had ordered 300 burgers. 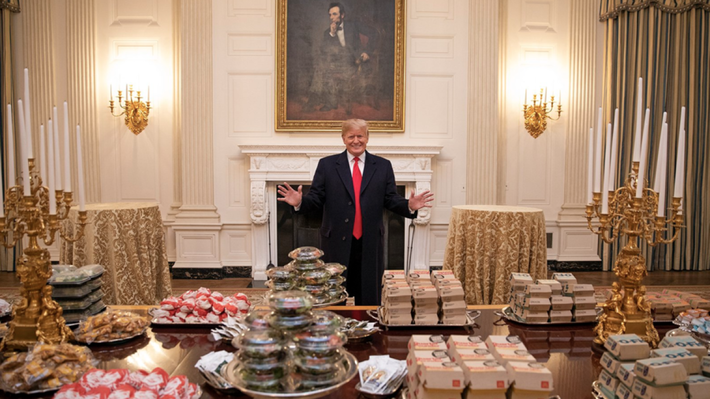 I am lost for words.

There is no telling what would be on the menu for "Steel drum band" from the Caribbean.  Especially if he thinks they are from Puerto Rico

It is a matter of principal.  Do you agree or disagree with tRump?  We are very disappointed that all the rich white Red "Socks" went and all the rich players of color obeyed their conscience and did not, disagreeing with tRump on all issues and the terrible destruction of our moral world leadership.

If you all do the right POLITICAL ANALYSIS you will come to realize that DONALD TRUMP is the BIGGEST FRIEND of AFRICAN AMERICANS.

Ah leaving this topic alone for now. But I am coming back on THIS FORUM five years from now and PULL UP this topic again to make my point. Well, it is not MY POINT -- it is REALITY!!!

Ah hope allyuh eating healthy and taking care of allyuh mental and physicall health so that allyuh will still be around to see the OBLITERATION OF BLACK POLITICAL POWER in AMERICA (aided by the DEMOCRATIC PARTY) -- long after THE DONALD is GONE!!!

Lord you delusional, lol...  Can't wait for the election when Trump, The Biggest Loser of all will hear the words from the US electorate, fuelled by the Afro-American Voters, "You're Fired"!!!