The Great Switch To "Hello" 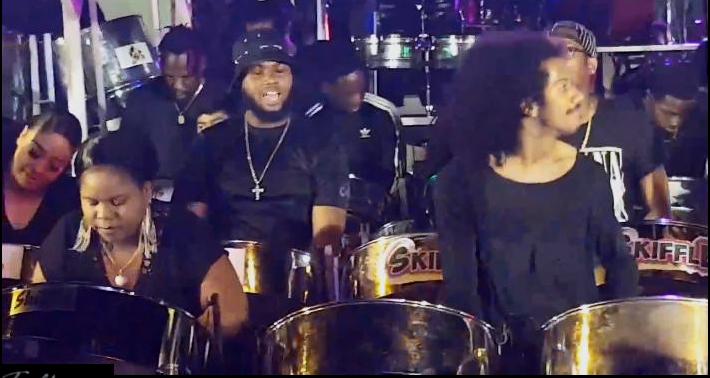 Skiffle Steel Orchestra changed their 2018 Panorama tune with five days to go before the Prelim Panorama judging. The results were fantastic as Skiffle heads into semi-finals in second place, tied with Phase II Pan Groove and just two points behind the leading Renegades Steel Orchestra. check interview below

bugs: I posted an article on that topic that I found in the local papers with the author calling for just what you said: "no boundaries or borders" between the LOCALS and EXPATS and outlining the benefits of "unification".

Yet, it will take a long time to RAISE THE CONSCIOUSNESS. Even backwater Guyana (Lord, I will get in trouble again) is setting up organizations to start bringing back EXPATS in what I called the BRAIN RETURN for the betterment of the land.

Ah mean look at the kind ah music BRAIN RETURN dem SKIFFLE ARRANGERS bring back to the SOUTH and the PANORAMA!!!

Sabrina give me a concussion jus so.  You know, if she had taken the time to read Cecil's response she would have understood that there can be no offense here.  ICP was just that - the 3Amigos led a bunch of highly skilled players from the North (New York - the place where everyone wear's a Yankee hat) - and who spend every chance they get playing with bands all over Trinidad and Tobago for Panorama - and put a beat-down on the Boogsie Sharpe and Phase II - which I totally enjoyed - since they are my kids.

Claude what do you take for your concussion?

Men like me and TRUMP just live with the CONCUSSION, bugs!!! If we take any kind of prescription pills we would end up being quite dull and boring living in "PLEASANTVILLE".

You folks in "Dub-nation" really enjoying yourselves. But don't worry King James will have the last word. It's ironic how a bunch of Soca tunes have brought "calypso" back to the Panorama. Kes, Voice, Ultimate Rejects have all been working the panyards. And the man who wrote "Sweet for so" is a Panman who wrote the tune on a pan. 2018 is an interesting year.

How come Glenroy is quite?

Bugs, Glenroy is a All Stars man, maybe he has ah concussion too

I think Phase 2 has the best interpretation of the song, and they were well short of the allotted 8 minutes so there's enough room for improvement, Skiffle sounded good also but i'm not sure how much more can be done to the arrangement.. Duvone did a great job with Renegades and they're very well rehearsed, if anything maybe just a little too much dramatics it takes away from the flow of the music. As for the propaganda that a south band or foreign based arrangers can't win panorama is just making excuses for whatever results come out because every band at some point in time believed they were robbed, that's how competition is.

My biggest question is why are the judges still being so kind to Silver stars and All stars, I have nothing personal against  :"Smooth" or "Liam" they're both great arrangers but it seems like the music has left them behind and I had both of them way down the field behind Exodus, Starlift and La Brea Nightingales after prelims.

All things considered it's nice music this year and the judges are doing a decent job thus far.

Can someone please convince Pan Trinbago to only allow single pan bands to play old compositions and large, medium and small bands play current songs, these arrangers are getting lazy and just recycling the same songs every year we're tired of hearing Lorraine, Stranger and Pan in A minor, to name a few, we cannot forever live in the past!

Anthony: I like your review. After you listen to the performances on Sunday, you should come back and provide musical insights later in the week on a few of the bands.

Thanks for the compliment Claude, I will listen and come back with my insight on the performances after Sunday. I rarely comment on this forum because some supporters of certain bands are easily offended and can become very offensive, my love is for the music and pan and like having healthy and informative discussion about them. At times I may seem bias to certain bands because of my preference for the jazz influence but I like to give credit where it's due even if it's not what I personally like.

On another note I saw a discussion about San City and it's political fight with the governing body, the irony is I listened to their performance on facebook and was really impressed, not knowing about all the drama involved I told a good friend that was one of the best medium bands I've heard so far then I see this craziness with Pan Trinbago , we must encourage our youth and not sure what the fight is but these old thin skinned men in the pan fraternity should observe by now that without the youths "Steelpan" as we know it is dead!

Permalink Reply by merrytonestothebone on January 25, 2018 at 8:01pm