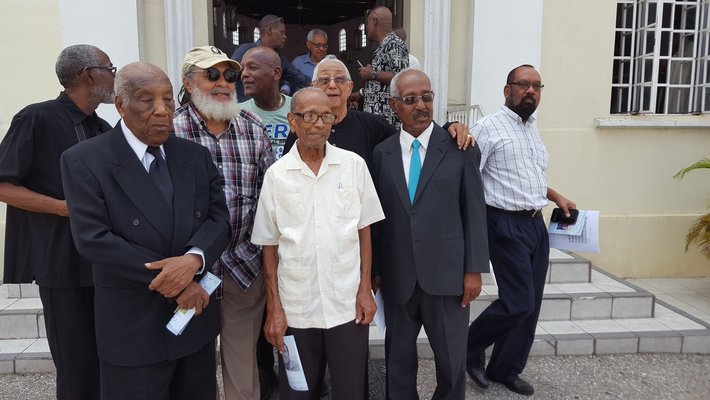 I was happy to see that KEITH DIAZ showed up to pay his respects to CURTIS PIERRE.

In general, I thought that the MEDIA COVERAGE was scant and very little appreciation was expressed for the GREAT CONTRIBUTION that CURTIS PIERRE made to the WORLD OF PAN

CURTIS PIERRE expanded the PLAYING FIELD for PAN at a crucial juncture in its development and social acceptance. That contribution cannot be QUANTIFIED, so many may choose to see it as NOTHING more than a drop in the bucket -- for reasons that are obvious to objective observers of the society and STEELBAND MOVEMENT.

But I am sure that KEITH DIAZ saw the THE BIG PICTURE and showed up to pay his respects to one of the GREATEST CONTRIBUTORS to the STEELBAND MOVEMENT -- CURTIS PIERRE.

Looking at the picture and assuming he is the person speaking to Mr Forteau, I think a suit would have the most respectful attire for the day!

In defense of Mr. Diaz's attire, I find it necessary to correct your error.

Expecting anyone, ANYONE, to wear a coat and tie in the blazing sun at 35 degrees celsius (95 for Mr. Gonzales et al) is brutal and unreasonable. We don't show respect AT FUNERALS by what we wear.

It is a misconception that men in the tropics must be attired in a coat (jacket) and tie to be considered properly dressed, that is ARCHAIC, COLONIAL, BACKWARD.

It is not impossible to conclude that the way the descendants of slaves (I/ME/WE) dress in former tropical British colonies, has nothing to do with being appropriate, as much as it has to do with a culture that we/I, the descendant of slaves were forced to adopt. Our dress in large (like our names), is our inheritance from slavery.

I suspect that it may not be Mr. Forteau, as much as it may be Mr. Serette.

Russell:  I understand your logic in respect of the weather.  I stand corrected!

I did not mean it that way madam, and I apologize for being rough on the edges. Please forgive me if my diction came across as abrasive, it is not meant to be. My only intent is to share my honest opinion with you.

Aye Russell, ah Tshirt? surely he could have presented himself differently.

Mr Hinkson, as a Trinidadian resident in Trinidad, who has had the opportunity to see much, outside of Trinidad, attempting to discipline Mr. Diaz for his attire at a pan pioneer's funeral may be leaning towards disingenuousness. For starters, it would be interesting to learn what was printed on Mr. Diaz's Jersey (T-Shirt) before coming to any conclusion.

With Pan Trinbago's affable education officer lying out of his teeth to the world, with backings from his peers at the corner of Duke and Melbourne streets, Diaz's attire at Curtis Pierre's funeral should be the least of panmen's worries.  He showed up and paid his respect.

In 2019 it is unfortunate that (some) people of color, more specifically the descendants of slaves, can attempt to "pull up" another descendant of slaves, on not being attired in the slave masters costume in a climate that the slave is more familiar with.

Russell Providence, please stop this slave master crap. If this is the case, you would be happy for Mr. Diaz to appear naked, because that was our ancestor’s way before slavery. It is ridiculous in this day you are measuring attire for a funeral. It does matter how you dress to pay respect. Our ancestors would have dawned their best garb to show respect and appreciation to the fallen. If this is your resolve, maybe when you pass, your family should turn up naked; lay you one the ground naked and either burn you or drop you in a hole just as you are. Caskets or sarcophagi were only used for nobility and kings and unfortunately for you, that has not been bestowed upon you. There is no problem in using the best of both worlds, both form our ancestors and the slave masters. A simple shirtsleeve shirt and dress pants would have sufficed.

MM, you spoke a mouthful...

Cecil: I doh care about the CLOTHES THING!!! I want to know how YOUR PAN TRINBAGO EXECUTIVE represented itself at the funeral.

Give me ah report, nah.

You have been watching too many National Geographic episodes. Whose ancestors were naked before slavery?  Where did you get this nonsense from? Educate yourself. https://afrolegends.com/2013/05/17/history-of-african-fabrics-and-t...