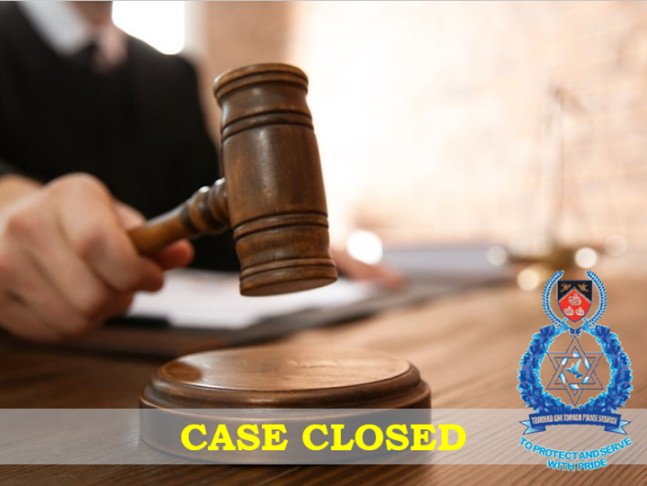 Trinidad & Tobago, W.I. - The Cold Case Unit of the Trinidad and Tobago Police Service (TTPS) has closed the case relating to the death of Japanese panist, Asami Nagakiya.

Ms Nagakiya’s body was found in the Queen’s Park Savannah on February 10th, 2016. A post-mortem revealed that she was strangled. Following a review of the evidence on March 18th, 2021, Director of Public Prosecutions (DPP) Roger Gaspard expressed satisfaction that the investigation was thoroughly done. He concluded that all the evidence pointed to one suspect, DAVID ALLEN who was killed in a police-involved shooting on December 12th, 2016, in Woodbrook.

The DPP advised that the matter be closed.

Acting Deputy Commissioner of Police (Investigations and Intelligence), Mc Donald Jacob, expressed his appreciation to the Cold Case Unit of the Homicide Bureau in dealing with this matter.

He said the Cold Case Unit, which was formed to deal with old cases, will be continuing their quest to solve other outstanding cold cases.

Allen, 31, of Enterprise, Chaguanas, posed as a woman, complete with make-up and tight-fitted clothing, when he attempted to rob Stir Fry King Restaurant and Casino Pei Da Xiu, Ariapita Avenue, Woodbrook. However, he was confronted and shot in an exchange of gunfire with an off-duty police officer while attempting to escape.

In 2004, Allen, then 18, also disguised himself as a vagrant and attempted to rob a TSTT technician as he was leaving 51 Degrees nightclub at Cipriani Boulevard, Port-of-Spain. There was a struggle and the technician was shot in the stomach and later died at the Port-of-Spain General Hospital. He was charged with murder.

In 2012, Allen pleaded guilty to the lesser charge of manslaughter. The State accepted his guilty plea and he was sentenced to four years and six months for the offence, in addition to the eight years he spent awaiting trial.

Asami was in Trinidad at the time, during the annual Carnival season, as a performing musician with Silver Stars Steel Orchestra for the 2016 Panorama.

Related:  The Codringtons Remember Asami Nagakiya - Gone but Not Forgotten

Yes, looking back on it and having read the whole news item, knowing just how shifty things and people are these days you begin to wonder how and why this has only just been brought to light.

Somebody must be hiding something.

THE PRIME Minister’s conversation with China President Xi Jinping has been linked to efforts to bolster this country’s stock of covid19 vaccines. But the issues surrounding the call are much broader.

China’s heavy use of vaccine diplomacy in nearby Latin America, particularly in Brazil, revives long-simmering questions about transparency and public procurement when it comes to our engagement with the world’s most populous country.

Ronnie McIntosh How It Go Look

It took delinquents less than a month to deface one of a pair of Chinese lion statues on Charlotte Street.

The statues, which were installed by the Port of Spain City Corporation in February, were donated by the People's Republic of China.

sometimes fate just takes far too long. It's about time it was dragged into the 21st century with a less than Nano second response.

Could not have been more justified. What goes around comes around.

The "guilty" plea by guilty persons to get a reduction in their sentence is a disservice to victims, society and justice. Criminals often wait until they are heading for trial to plead guilty. Why not immediately on arrest? Steups!!! He would have been in jail in 2016 and not able to murder Asami, or any one else!

And remember when it first happened a few weeks after the police said there was a love triangle ? Suggesting that she was involved with her murderer or someone known to that murderer?  The Labasse next to the fisheries.  It smelling fishy too.  RIP young lady. Congrats to the police- one less unsolved murder!