Tuning Up With Khuent Rose 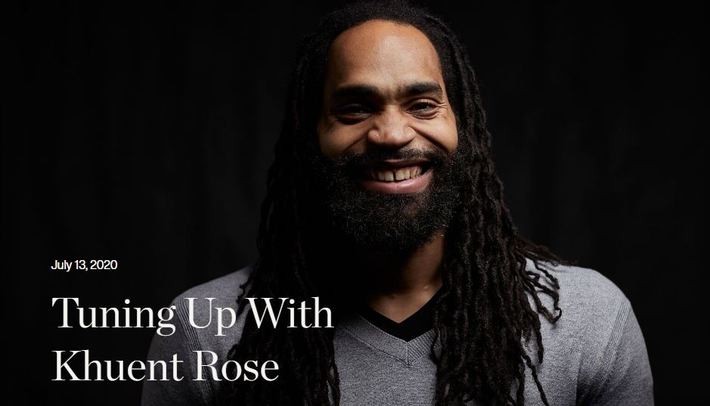 An educator, composer, steelpanner, and tuner, Khuent Rose is a busy man. When describing how he has navigated creative life during the pandemic, he compares himself to Sylvester Stallone’s celebrated antihero.

In mid-March and early April, the Crown Heights-based musician became even busier when he found himself caring for family members affected by COVID-19.

“I was being Rambo between two houses, trying to also take care of my other grandmother and my immunosuppressed father. I was wearing a gas mask over my face and stripping down to my underwear just long enough to give them a bag of fruit and run back to the other house. Over at my grandmother’s house, she was lying in bed and barely coherent of what her life is and breathing extremely heavily. She is eighty-four,” Khuent explains. His mother was just beginning to recover from COVID-19 as his grandmother fell ill.

“This is the sphere that I’m supposed to operate in,” he explains while maintaining his inspiringly good humor.

Cecil Hinkson: How yuh coming and HEAPING PRAISE on a YANKEE PAN MAN? And CANADA is yet to produce ONE PAN TALENT -- despite the fact that the CANADIAN GOVERNMENT has INVESTED BILLIONS in pan education in schools for DECADES, now.

YOUR MUSIC EDUCATOR has been TEACHING PAN IN SCHOOLS for over 27 years ... what seems to be THE PROBLEM, MON AMI? Not ONE SOLOIST produced?

Now Mr Gonzales, have you ever  heard Mr Kuent Rose? perform and I am sure the answer is no,so I want you to listen to him first then we could talk ,Check out 2020 Ramajay in T&T and you will see for yourself, Mr Rose is good.

And I might say this also he got rob in T&T ,with   Ramajay