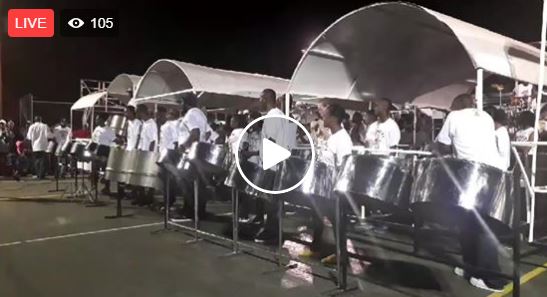 Permalink Reply by merrytonestothebone on January 30, 2020 at 7:26am

I agree...The rest are either much too much or just not enough...

Merrytonestothebone: Yuh owe meh SIXTY SECONDS of my life back. Last night ah see ah man ranting about  ANDRE WHITE and his arrangement of WRONG AGAIN (and yuh already know my feelings about that CALYPSO) -- so ah went and give it ah listen. Ah make about 45 seconds before ah turn it off and went and had two stiff drinks to get meh CALYPSO HEAD back straight on.

Now this morning ah get up and coming and reading your comment and out of respect for your vast musical knowledge and lifetime involvement in PAN and CALYPSO ah decide to go back and give the song ah listen but by the time ah make 60 seconds ah had to turn it off because of the amount ah irrelevant passages the man put in that music and when he did play the melody he drag it so much and failed completely to replicate the soulful expression that SKINNY BANTON infused into the original recording that ah had to wonder if ANDRE WHITE even LISTEN to that CALYPSO twice before he arrange it or if he spend all year making up ah set ah musical runs and then wrap it around this song just to show how much he know about other genres of music so one way or another ah go have to get my sixty seconds back from you.

(Now yuh notice that ah write one long sentence without no punctuation which is not usually my style. But it was just my way of expressing my frustration with these ARRANGERS of today. And with this SUPERBOWL coming up on SUNDAY is  a whole week of frustration for me since they taking these RUNNING BACKS and calling them QUARTERBACKS and everybody backing them to win the SUPER BOWL so that the game could change for certain complex reasons I cannot express here on THIS FORUM. Boy, ah feel like ah done live too long because ah seeing all kinda ting that I never wanted to see in my life -- especially how these PANORAMA ARRANGERS taking my SWEET SWEET CALYPSO and trying to turn into some kinda CLASSICAL EXPRESSION in the middle of CARNIVAL of ALL TIMES. And big big men -- even meh good friend MARTIN MAITLAND getting tie up with that PUSEDO-CALYPSO -- egging them on to dive deeper and deeper into that VALLEY OF VALIDATION. Well, in my books -- even though I am NOT A PAN LOVER --  PAN DONE VALIDATE ALREADY. So why spoil ah GOOD GOOD CALYPSO trying to prove ah MOOT POINT!!! I say JAM THE CALYPSO and show me that you could DELIVER the ORIGINAL SONG in TRINIDAD CALYPSO FASHION!!!)

And then EVERYBODY want to know how come THE GRAND STAND EMPTY for PANORAMA FINALS and how come they doh INVITE STEELBANDS to play in CARNIVAL FETE NO MORE!!!

Don’t know what yuh listening to Claude, but Pamberi was the pick of all ah dem.

Come on MERCER: He cannot even capture THE MELODY of the song ON THE PANS!!!

Permalink Reply by merrytonestothebone on January 30, 2020 at 6:24pm

Anyway to cut a long story short. My listening and yours would always be different and I respect your view. I must admit though that I have an emotional attachment to Pamberi since I live close to the band and have a relative who plays with them too. But having said that they remain one of the better bands I heard last night. Andre at least attempted to develop motifs of the song and I admire his modern approach to the arrangement in general. Potential was good too, though Amrit is still kinda still stuck in the 80/90's...Although I try not to live in the past, Clive Bradley would always say ad nauseam in reference to Panorama arranging..."Less is more"...Modern arrangers need to embrace that tenet...

Agreed, but they have stiff competition in Joylanders, Angel Harps, Potential and others. All performing creditably well.

Thanks for posting these it is greatly appreciated.

I know the thing now start  in the medium bands , and I only hear the East bands ,but I like what I hearing

from Popwell with Scherzando and  A White with Pamberi

that is my early favorites ..play On!!

Permalink Reply by merrytonestothebone on February 1, 2020 at 10:14am