Well allyuh know that KEITH DIAZ and RICHARD FORTEAU steal over $60,000,000 from PAN TRINBAGO -- but DIAZ still have THE NERVE to go and CUSS OUT my PRESIDENT (THE BEV) for owing him UNPAID SALARY ... Did you all read the FORENSIC AUDIT REPORT? (Ah know that PAN LOVERS doh like BAD NEWS so allyuh did not read it.)  But the kind of SCAMS that DIAZ and FORTEAU pull to steal over SIXTY MILLION DOLLARS from PAN TRINBAGO could make a BLOCKBUSTER HOLLYWOOD MOVIE and make GRANGER FROM GUYANA look like an AMATEUR SCAMMER for failing to win that election.

Anyway, despite ALL THE MONEY that KEITH DIAZ THIEF -- he still claiming that PAN TRINBAGO owe him MONTHS and  MONTHS of UNPAID SALARY. (Ah did raise this subject before, eh!!!)

So just so KEITH DIAZ show up in THE PRESIDENT OFFICE and start to CUSS OUT THE BEV for he UNPAID SALARY. Could you all IMAGINE THAT? Only in SWEET SWEET T&T!!!

Ah doh know if ah get the STORY RIGHT, EH!!! So I am SUBJECT TO MODIFICATION. But this is how I get the REPORT from a hardcore BEVERLEY SUPPORTER in TOBAGO.

And this is what the TOBAGO MAN TELL ME: He say that last week KEITH DIAZ went in the PAN TRINBAGO OFFICE and leggo one set ah BIG CUSS on THE BEV (like he going mad) DEMANDING from THE BEV  the SALARY OWED TO HIM from when he was PRESIDENT and did not get pay. Well, THE BEV tell THE OLE HARDBACK PAN MAN BADJOHN that she did not have NO MONEY TO PAY HIM. (Ah hear THE BEV real STAND UP FOR SHE RIGHTS, EH.) But in the middle of the KEITH DIAZ BADJOHNISM one of the PAN TRINBAGO employees get bold enough to JUMP UP AND CHALLENGE KEITH DIAZ. Hear she: You want money from here? Is FIVE MONTHS you did not PAY YOUR STAFF during your last year in office. And to make matters worse DOCTOR DOLLY paid you 4.8 MILLION DOLLARS in 2018 to pay the PANORAMA BANDS and not one STEELBAND get one red cent from you. The NEW EXECUTIVE had to go and BORROW 4.8 MILLION DOLLARS to pay the BANDS. MR. DIAZ, WHAT YUH DO with all the PAN MEN MONEY -- and now yuh still have the gall to come in here and say that PAN TRINBAGO and THE BEV owe you UNPAID SALARY?

Well with that KEITH DIAZ walk out the office in a HUFF and a PUFF  ... and who knows what he have UP HIS SLEEVE next. It look like THIS DRAMA go run for a while and ah hope that THE BEV doh tell dem TOBAGO FELLAHS to stop feeding me REAL LIFE SENSATIONS from THE PAN TRINBAGO EXECUTIVE!!!

Ah hope nobody doh sue me for slander -- because ah does put ah little salt and pepper in the retelling of the tales!!! But ah eh make up that story, eh!!! 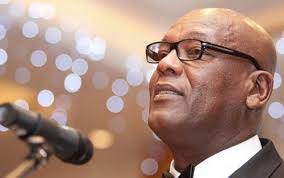 ... now if THE BEV was TRINIDAD SMART she would just PAY OFF KEITH DIAZ and tell him "GO NAH!!!"

But she from TOBAGO and she is a WOMAN and she DOH UNDERSTAND the TRINI MAN THING (doh waste allyuh time calling me SEXIST) .. furthermore, ah doubt that she even read the FORENSIC REPORT and understand the level of depravity of men LIKE KEITH DIAZ. So he eh giving up until HE GET HE MONEY.

Allyuh more BACKWARD than dem TRINI PAN SOLOIST who so severely embarrassed the MECCA OF CALYPSO and the HOME OF THE LIMBO in the recent INTERNATIONAL 2020 PANORAMA -- because this is not the FIRST TIME that KD went to that office begging for he money. (Check out previous postings on THIS FORUM.)

So, being ah REAL TRINIDADIAN, I can assure allyuh that KEITH DIAZ WILL COLLECT ... even as scrunting PAN PLAYERS who put in all the HARD LABOUR will remain UNPAID.

Ah bet allyuh doh know that is KEITH DIAZ who put BEVERLEY RAMSEY-MOORE in OFFICE after a PRIVATE MEETING at the HYATT.

Come on BEVERLEY -- pay the man he money and send him on his way!!!

Claude:  I almost wet myself when I read this story.  Couldn't stop laughing .....

Ingrid: I hear that yuh went by THE BBC and tell them that CLAUDE GONZALES make up that story!!! But look!!! GREGORY LINDSAY just come up and TELL THE SAME STORY!!!

TRUST ME INGEE BABY (ah little YANKEE ENDEARMENT) -- I have the BEST SOURCES down in the MECCA OF THE STEELBAND. And when I RUN A STORY -- IS WHAT TOWN SAY!!!

Beverley say: LEADERSHIP YOU CAN TRUST!!!

And CLAUDE SAY: INSIDE INFORMATION YOU CAN TRUST!!!

Earl Richards JEALOUS WE REAL BAD ... but he and me coming to make a LIME with you IN LONDON one of these days!!! LOL!!!

It always come down to money....SMH

And yuh eh even hear the GOOD PART that GREGORY LINDSAY added in HIS REPORT on the INCIDENT!!!