Why is it when UWI awards honorary Doctorate to people in the entertainment industry Pan Tuners are not given consideration. This skill is a specialized science what do you think? 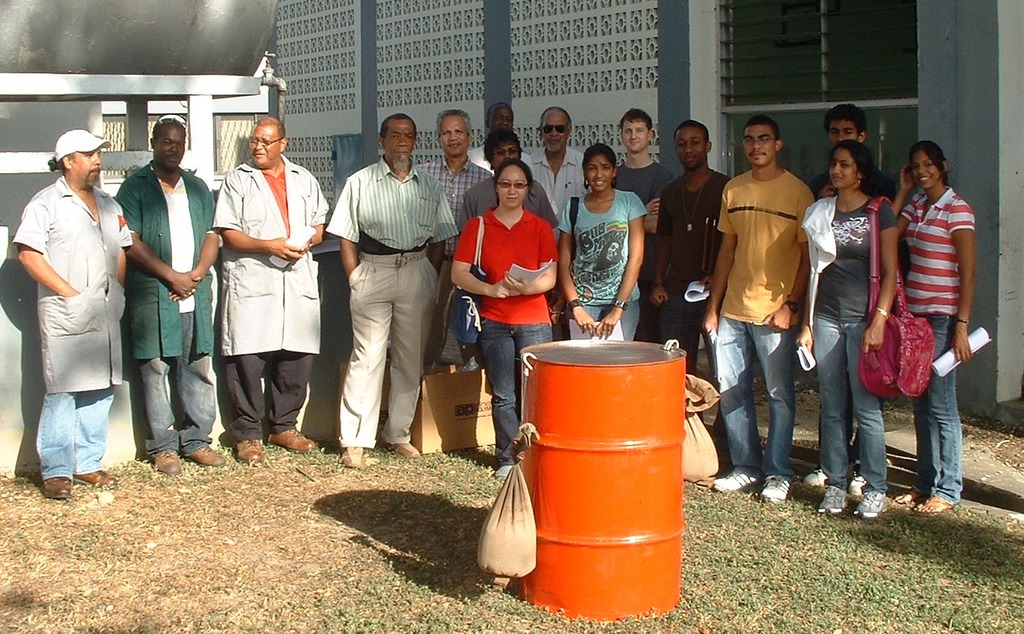 Class of 2010 for Faculty of Engineering course  ENGR3000 The Technology of the Steelpan. Tuning taught by master tuning Denzyl Fernandez (centre left with back brace on).

Thanks for the info...based on what I've heard from tuner Clifford Alfred, it takes 7 years to develop the skill to meet the given standard. Is this correct?

Like everything else you have to put in your 10000 hours. But the course wasn't so much to make tuners but for them to develop an understanding of what is involved in making the instrument so that they could help in bridging the gap. The workshop (now run by Jimi Phillip who ran the first offerings in 2000) is backed with classes on the history of pan and the science of vibration and sound as they apply to pan.

Permalink Reply by Juanitto Jordano Jorda'ninho on November 17, 2015 at 2:41pm

NO ODW, 7 years ? this is not correct, tuning a pan depends on the student ability to retain what is being taught, and the teachers ability to distribute the technique's, it took Anthony Williams (1) year for Herman "rock" Johnston to retain that skill, and myself  6 to 8 months to fully develop the technique, after Johnston left in November 1963,  as Johnston derive West Side Symphony 3 months later, and as a "PIANO" tuner myself, it took me (1) year to learn about "Octave stretching", and as I said before, it depends on the students ability to retain what is being taught too him/her...

Permalink Reply by Juanitto Jordano Jorda'ninho on November 17, 2015 at 4:22pm

ODW, and as for this "Doctorate Award", it does not have any real value, it's not worth the paper it's printed on, what pan tuners need is some paper printed money for all their hard work, this UWI Doctorate Award is a SCAM, set up by these so-called Academic scholars, to fleece the Countries National Treasury of it's finances, Example, when I started playing pan in 1954 at the age of 9 yrs old, I could remember people like the Mannings, Regrellos, Imberts, Copelands, Byrons, and the Maynards, who thought that they were better than everyone else, looking down their noses at us and saying to us, you're "Rouge's and Vagabond's"/ meaning, homeless tramps, NOW, they take that same "rouges & vagabonds instrument", via "Plagiarism" claiming it as their own, cheating pan tuners/pan men & women out of what is their own, so that we would live in poverty and squallor, to later die like dogs, well all this has come to an end, the Cycle of 5ths and or 4ths & 5ths tenor pan "Technology", which derive the other voices, the Big & Mega Tenor Pan, the whole tone d second, & 3 cellos, the diminished d guitar, the suspended interval quad  cellos, the augmented tenor or high bass, and the 4ths & 5ths low basses, along with 4ths & 5ths "Hydraulic Impregnator Press" that sinks and groove the bowl before attaching it to the skirt, is being sold to a FOREIGN ORIENTAL ENTITY, now every tuner the world over will require/have a LICENSE with specification to reproduce the tenor pans, et al/ others...

A degree may be nice , since I understand the desire to honor our highly skilled tuners.

But the emphasis on an Honorary award misses the point.

Tuning is a skill , not an art , and the results can have tangible measurements , unlike art where there are judgement calls.

In other words , the quality of a tuner's work can be critiqued and measured , even by technical means.

More beneficial I think would be some kind of a grading system ,  something like Second class , First class technician , master craftsman etc.

An award of a technical diploma of some sort denoting the highest level of proficiency that is earned would have more value than an"Honorary" degree , which after all is nice , but still "Honorary".

Not saying that the recognition and ceremony of the Honorary degree won't be a nice addition to a tuner's trophy case , on top of every thing else, though.

As usual , just my opinion , feel free to disagree :)

Oh , and BTW my award system would make special accommodations for established greats , who have already attained Master status by popular acclaim of their peers, based on their bodies of work.