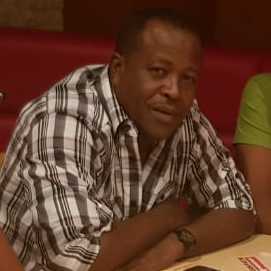 Hi all, my name is Keith Byer and i am vying for the position of president of pantrinbago in the upcoming elections.In the field of eight candidates, i am the most experienced, having serve as the…Continue

Keith Byer has not received any gifts yet

If you like, go ahead and tell your fellow WST Ning members about yourself here
President of Diatonic Pan Institute.

How Low Will We Go

I feel extremely proud of the members of my team (Team Progressive And New) for the manner in which they have conducted themselves thus far in this election.
At the first formal gathering of the team, we agreed on a policy of the best person for the job, even if they are on opposing teams or independent. While others has fielded a full slate at all cost, we fielded a limited slate and endorsed competent persons who have otherwise offered themselves.
With the passing of pan icon Ken ‘professor’ Philmore, we took a decision to cease all campaigning during this time of grief. It was commendable the manner in which the members of team PAN exercised restraint during this period of mourning.
It was however, very distasteful, disgusting and disrespectful the manner in which other teams openly campaigned at both wakes and at the funeral. To add insult, a message from the deceased, written like a script and is obviously not a WhatsApp nor Facebook message (which makes it suspiciously bogus) was circulated during this time of bereavement.
I shudder to think what will come next and how low some people may go. Please people let’s not lost our dignity in our desperation to get in office. I am assured that team PAN will be dignified and not show desperation as we journey towards the responsibility of making Pan Trinbago a viable entity.

How is everything with you, I picked interest on you after going through your short profile and deemed it necessary to write you immediately. I have something very vital to disclose to you, but I found it difficult to express myself here, since it's a public site.Could you please get back to me on ( mr.jamespollard100@gmail.com ) for the full details.
Have a nice day
Thanks God bless.