So have we in 2019 reached that dreaded 'glass ceiling' where bands that are outside that 'big 5' sacred circle are thrown under the bus? The message that this sends to every other band is that no matter how hard you try, no matter how  proficiently, well-arranged and executed, no matter how 'top drawer' a performance, the answer will always be a resounding 'No'. Unless judges don't get overly swayed by popularity and/or fan enthusiasm, unless they dare to use objectivity and make…

Tribute to a steelpan Icon Ellie Mannette by Salah Wilson

21 VISIONS for the 21ST CENTURY

My third original collection "Put It Behind You" features 20 new tunes in Caribbean styles.  Charts are arranged with melody & chords in a lead sheet format that is easy for live bands to play.  For soloists, each backing track blends drums, bass, and percussion, with a variety of harmony instruments including guitar, organ, marimba, vibraphone, and occasionally, horns.…

To  the administration of WST and Pan Lovers the world over, please feel free to access my page and engage in any questions, clarifications,conversations etc, etc.

I have seen Keron's team. In my opinion too much accent on Biographies and academia of the candidates. Not impressed at all. Pan must not go down that path, we need a combination of academia and repr…

I have seen Keron's team.

In my opinion too much accent on Biographies and academia of the candidates.

Not impressed at all. Pan must not go down that path, we need a combination of academia and representatives

move the movement. Keron, this is not the Mayors office.

About the Man Himself, Ellie Mannette

ABOUT THE MAN HIMSELF

Much is known of Ellie as a pan tuner and popular steel-band man, but not many people know of his academic side. Ellie as a young man was very ambitious and at an early age became an apprentice in machinery and graduated at the top of his class as a Lathe Operator. He was well recognized for his work in Trinidad in that field, as a valued employee at the Acme Engineering Co. on Richmond street. His first encounter with Navy would come when US Navy forces staged a… 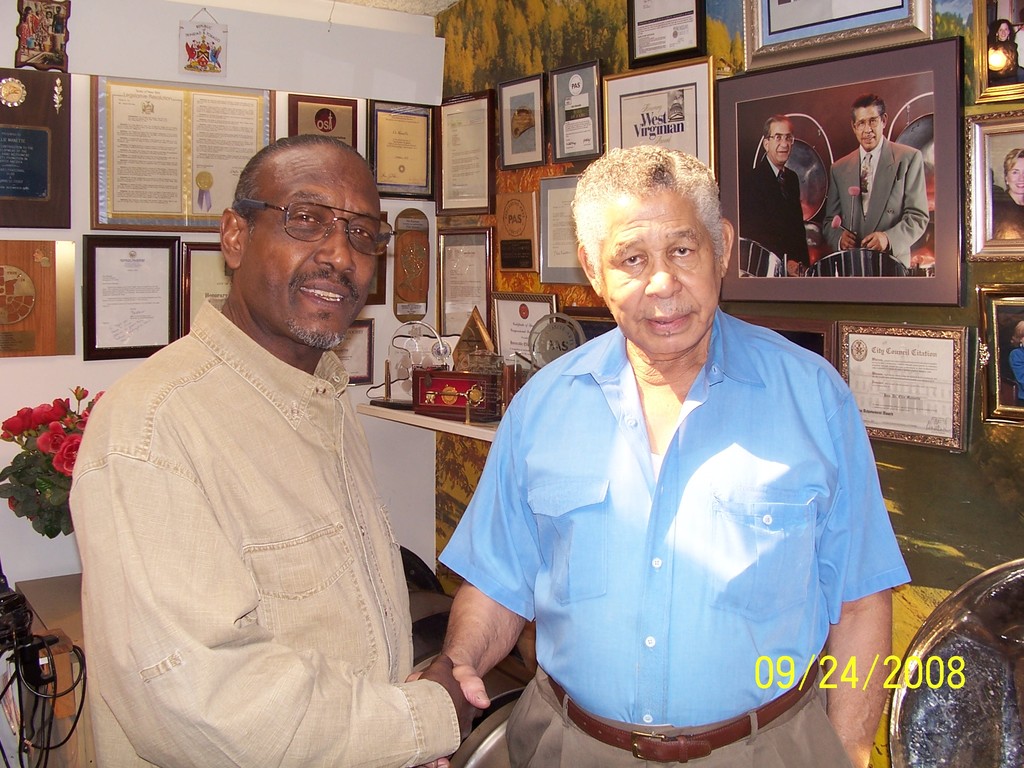 Elliiott was always surrounded by the people who loved…

My comments about my enjoyment of the recent steelband parades have been misinterpreted as an endorsement of steelbands on trucks , so I wish to further clarify my thoughts, to clear up any misunderstandings.
.
Now , I fully appreciate why it's done , but I don't like steelbands on trucks.

Like I've said many times, I think something about the steelband vibration is lost , with the distance created between the steelband , the natural environment , and the…

I was very disappointed that I did not receive a notification of yesterdays event Pan on the Avenue. I sent a note on your Facebook. We got to see the video which stopped at Harmonites, the large bands we did not see or hear. SAD.

Your send-off today was synonymous with your personality, humility, love of pan and people.

Continue to fly the Renegades flag, and pan flag in general, flying high in heaven.

You will be missed by all.

When Steel Talks has lost an esteemed Member....

Stanley 'Kiddie' Currency ( Known for his insightful, Thoughtful and biting commentary- And an Ardent Desperadoes Affectionado) has passed on.

Condolences to his immediate family, Simple Paradise Sports Club Members and friends. HE SHALL BE MISSED!

Steelband "pandemonium" is not just about pan people , it is about All of us !

The mistake we are making , my friends is assuming that the problems facing the steelbands of T&T are pan people’s problems , but they are much more than that.
The problems are societal , and about national identity , culture ,vision and even more.
Trinidadians have not yet recognized that in a failing economy , an emphasis on culture and tourism will become a most important part of the nation's economic security.

Many Trinidadians have been reluctant to appreciate…

If not for grace


Four-part historical documentary series tracing the changes to British national life brought about by the first major influx of people from the Caribbean on the troopship Empire Windrush.…