A Look at Second Place and Panorama - 1963 to Present 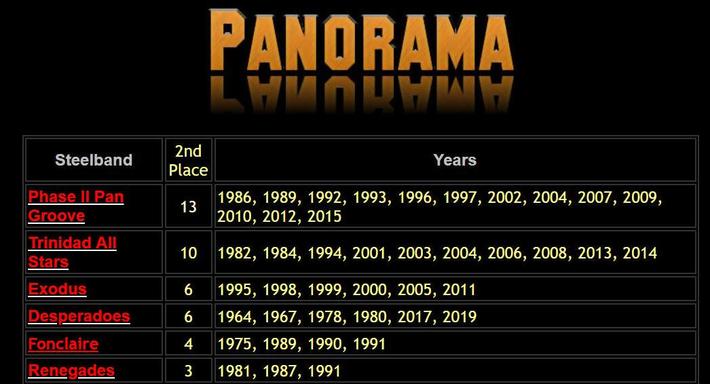 You are are correct. Desperadoes did come in second in 1967.

However, Fonclaire and Renegades shared second place in 1991.

Thanks for the correction.

Many pan-fans have argued that the only thing worse than Phase II having so many 2nd place results are the amount of Panorama championships they have been awarded that they ABSOLUTELY did not deserve.

Phase II didn't earn all those wins, instead the title was GIVEN to them.

It is a lot like the broken clock being right twice a day. Except the broken clock that is Phase II keeps moving out of time BUT the judges say "Oh gosh...ah feel sorry for them. We know that they are not the best, the arrangement isn't that good, we can't follow the supposed genius musical progression, you can hear the mistakes, they commit clear false starts...but we favour them so let's give the mentally challenged a chance and we'll give Phase II the win."

It is understandable if you have doubts and require some proof.  Easily solved. Let us start where it all really began - Panorama 1987.

Panorama 1987 - Renegades played "Pan in A minor" and All Stars played "Curry Tabanca."  These are 2 legendary benchmarks bits of music in Panorama history that are still remembered with great fondness. Yet, Phase II won with "This feeling nice."

Many pan lovers have referred to Panorama 1987 as to when they stopped paying attention to the judges.

Fact - At the International Panorama competition 2015 in All Stars 2015 played "Curry Tabanca" and destroyed the competition.  They chose a song that did NOT win Panorama and won.  It is like the Gods fixed an error from nearly 30 years ago.

Want some more examples? No problem, because there are plenty.

Panorama 2002 - All Stars played "Pandora" which was miles ahead of all competition and every unbiased fan knew it. Some how Phase II was only 2 points behind All Stars, a result no one could understand.

Panorama 2004 - All Stars played "Ah paid meh dues" and tied with Phase II who played "We like to play".
There is no way that they are in the same class and certainly NO WAY Phase II should have been in 2nd place. We can debate if Exodus deserved the victory, but here we are focusing on the success Phase II should NOT have had.

Panorama 2006 - Listen and compare Phase II "This one's for Bradley" versus All Stars "Soca Warriors."  Of the two offerings, there is NO WAY Phase II should have won or even earned a 2nd place.

Panorama 2007 - Listen and compare Phase II "Musical Vengeance" to All Stars "Thunder Coming Down."  At this competition even the Phase II players didn't know how they were going to win because All Stars were way ahead of them in every way.  Yet again, the judges GIFTED Phase II the victory.

You'll notice that All Stars is usually and inexplicably often in 2nd place behind Phase II. Well, maybe not so inexplicably. It is well known that All Stars is often robbed of a Panorama title but usually wins the People's Choice award.
Hmmm....a few judges vote All Stars 2nd but thousands of people put All Stars 1st. I wonder who could be right????

The positive side is that at least the judges didn't give Phase II more victories and instead put them in 2nd place. After listening without bias or prejudice to the Panorama offerings of all the bands, it would be clear that often they don't even deserve such high praise as 2nd place.

If you have any doubts, listen to Phase II's "Woman on the Bass" then listen to All Stars classic offering.....If you dare.

Phase II - Woman On The Bass

Cat 2pan
4 days ago
Fantastic arrangement great on the crescendos I know they got full points on those and they did more than required(all great arrangers make sure) excellent on major-minor through key changes. Excellent guitars and bass solos as if. love pan and there is nooooooo feeling like bringing home a panorama championship to me.

Babatunde Adelekan
4 years ago
I liked this version more than all stars tbh. A lot more moods than smooth's rendition