A Republic of Pan; Pan in the Countryside in Moruga was electrifying; thank you Minister Lovell Francis.

A Republic of Pan; Pan in the Countryside in Moruga was electrifying; thank you Minister Lovell Francis.

Grand Chemin beach facility on Sunday before the holiday is normally packed. Normal ‘Trini ting’ where car doors and trunks are open with loud music blasting, a cooler of food and a cooler of drinks. Mixed with the scent of the sea breeze is the aroma of curry chicken or chicken curry (if you are a Guyanese cricket fan). Blue skies, coconuts trees and almond trees. People trying to wash sand off their skin with bottles of sea water while others attempt to change their wet clothes with their towels wrapped around them. Nothing short of a spectator’s day in the land of the living.

The 2 pm food festival and small business expo attracted a fluent crowd but, when the sun cooled, pan music took precedent. Pan Elders, the five-time Panorama champ, started the show with a bang. Skills, confidence and showmanship coupled with a pulsating rhythm section. However, nearing the end of their performance, the audience got impatient. It was not the typical pan crowd that usually follows the show, Pan in the Countryside. It was the residents of Moruga. They came out to hear their band, Moruga Core Pan Champs. Their debut was up next and the residents were anxious to hear them. That band’s roots are in St Mary’s Government school. Past and present pan students who had come from the MMPU formally known as Pan in the Classroom Program, reunited to form a new band to give all those big bands a run for their money, and they did. They performed Homemade Wine(Parang), Perfect (Ballad), No Good Girl (Rockers) and to end their set, This Is The Year For Love (Soca). As they played, the crowd was in ecstasy and when the band ended, the crowed started to leave, as if to say ‘we hear we band and don’t want to hear the rest.’ So much so that the Old Tech Steel Orchestra played for a very scanty audience, although their music was well arranged.

San City and brass gathered the crowd once more. They had two trumpeters playing together with the steel pans and this created a different level of interest among the listenership. When San City finished their set, the crowd insisted that they played one more to which they obliged. Then, when that song was finished they asked for another, and San City declined because there was still one more band to go, King’s Row Retro Riddim, the only single pan band of the night. They had the audience singing and dancing to some medleys of old lavway as the brought down the curtain on a high note.

Something that must be mentioned is the fact the the MP/ Minister of state in the Ministry of Education, Mr. Lovell Francis was there to hear the first note play, all the way to the end. I must congratulate him,Mrs.Nailah Gabrieland his team of choosing to feature the national instrument in his constituency. I know he must be proud of the Moruga steel band and I do hope he reaches out to them to assist them in any way necessary.

Though our citizens are starting to buckle under the nation’s ongoing recession, the culture, in particular the steel pan, was most prominent in this 2018 Republic day celebration. The Big Five Concert was held on Saturday, Sunday was the Pan in the Countryside event, the launch of Carnival and the Antillean All Stars’ youth event. Monday morning was the Invaders Republic Day J’ouvert, Monday night was Skiffle and Renegades’ big concert and other pocket events all around the country. Let me, on behalf Trinidad and Tobago, thank all steel bands for the hard work and dedication through the less than motivating times in our organization. Stay strong and stay focused for brighter days are coming.

Aquil Arrindell: I don't know how yuh does find time to DO AS MUCH AS YOU DO.

Do you really have a FULL TIME JOB? Or did your parents die and leave you a BIG TRUST FUND?

Maybe you should consider RUNNING FOR PRESIDENT!!! Yuh have so much PASSION coupled with YOUTHFUL ENERGY and BOUNDLESS FAITH IN PAN'S DESTINY. You should be THE PRESIDENT of PAN TRINBAGO.

People who running FOR PRESIDENT eh even lifting ah finger and you running yuh blood to water from North to South to South of South. Dat is the kind of energy we need in Pan Trinbago starting November 1st!!!

I don't want NO EMPRESS sitting on a THRONE on PARK STREET and issuing orders left and right. I need a HANDS ON PRESIDENT just like you LIVING AH HANDS ON PAN LIFE ... your PRESIDENCY will just be an extension of what you do every day for PAN -- only with an OFFICIAL TITLE added.

Is not about selling myself short.

It is about getting the best man for the job.

If i thought i was that person, I would have taken up the offer but, to me, there is someone better, so, unselfishly I give way.

This is about Pan Trinbago and what is best for the organization.

The world needs a full time leader at the head of PT. someone who would be available at a moments notice.

I am a school teacher and I can't sell the nations youths short. They too are depending on me.

Mr. Byer and I hold the same values. And the one that is most important to us is that our word is our bond.

I am having problems with people in my community who are always ready to betray, go back on their word and justify their actions for self interest.

Support me Mr. Hinkson and my team and i will not disappoint.

We are not hearing anything from Ms. Ramsey-Moore, is she not interested in the post of Presidency, or has she got it all sewn up.

Mrs. Beverley Ramsey-Moore believes that she has the PRESIDENCY SEWN UP. She has the HILLARY CLINTON SYNDROME -- the PRESIDENCY is her birthright, so there is no need for her to run up and down the country campaigning for THE POST.

On the other hand, because of her old ideas, it is difficult for her to see THIS WHEN STEEL TALKS FORUM as an important CAMPAIGN PLATFORM -- a GLOBAL STEELBAND FORUM which has opened pathways for CARIBBEAN PEOPLE to share PAN HISTORY and PAN MUSIC with the world. THIS FORUM offers any candidate a chance to reach tens of thousands of PAN LOVERS around the world. So any candidate who plans on being the PRESIDENT of the WORLD GOVERING BODY OF STEELBAND (PAN TRINBAGO) SHOULD BE cognizant of the VAST PAN AUDIENCE that tunes in and out of this WEBSITE every hour of every day.

I don't know the people who set up this PLATFORM, but they must have worked HELLA HARD so that today any candidate in TRINIDAD could come on THIS ESTABLISHED FORUM and give reasons why they should be elected the next president of PAN TRINBAGO.

Any candidate who cannot SEE and SEIZE this opportunity to come to THIS FORUM and outline their agenda for ruling PAN TRINBAGO does not see the BIG GLOBAL PICTURE FOR PAN and will only maintain the same insular approach to running PAN TRINBAGO in these modern times when AMERICA is laying greater and greater claim to the instrument.

Beverley Ramsey-Moore has MANY STAUNCH SUPPORTERS on THIS FORUM who could support her message if she comes on THIS FORUM. So hiding behind the fear of ONE OPPOSITION POSTER upsetting her apple cart is more than ridiculous. In politics everybody is not going to love you -- everybody knows that!!!

But she is free to come on THIS FORUM and lay out her agenda. I am sure that I am more open-minded than BUGS and CECIL and ODW -- her most loyal supporters!!!

"Mrs. Beverley Ramsey-Moore believes that she has the PRESIDENCY SEWN UP. She has the HILLARY CLINTON SYNDROME -- the PRESIDENCY is her birthright, so there is no need for her to run up and down the country campaigning for THE POST."

ALL POLITICS IS LOCAL... the delegates VOTE will determine the outcome.

He spending BIG money to sell an image, impressive CV.

"Valentine and his team are currently working on a manifesto which will show the membership how they intend to take Pan Trinbago out of its current crisis and move forward in a positive light." 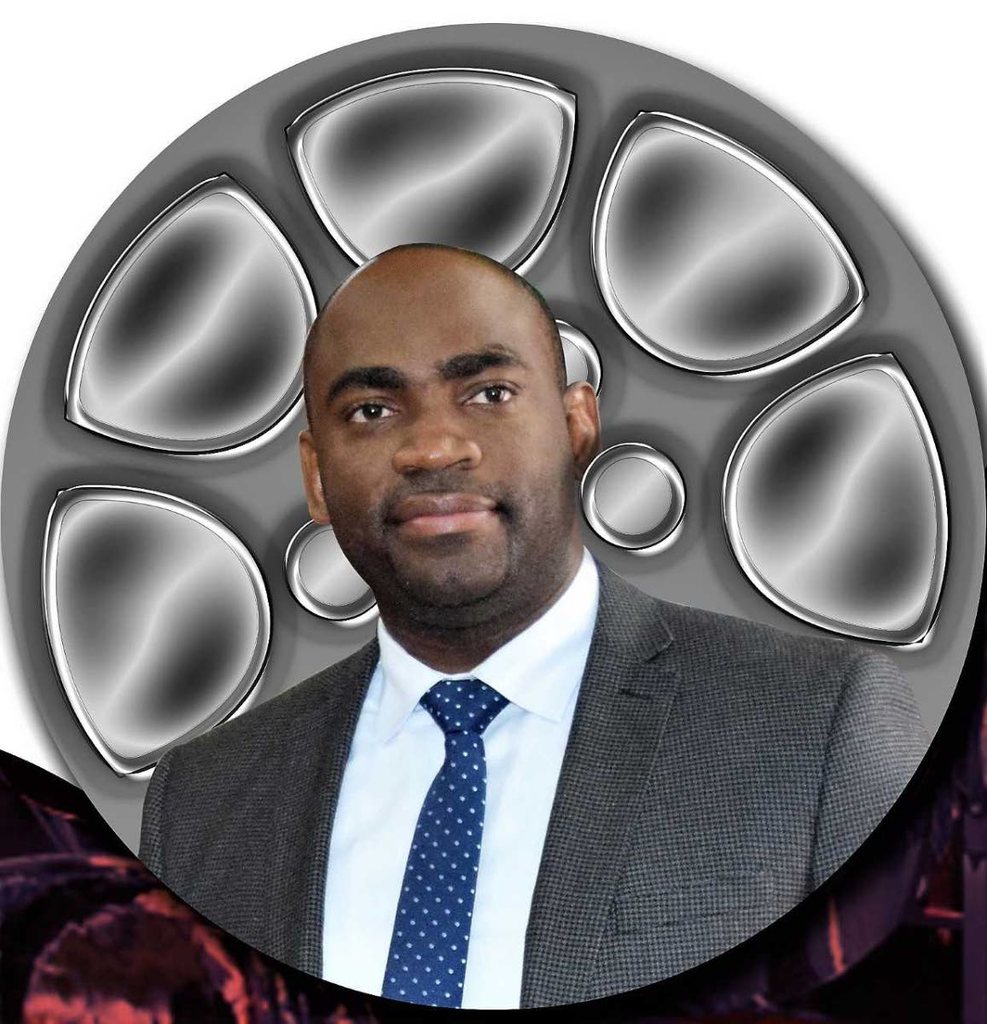 Thanks for the UPDATE, odw. Yuh know ah busy this morning looking at that KAVANAUGH/FORD interrogation -- sweeter than sugar.

So I did not have time to find or read this article.