When Steel Talks extends our sincere condolences to the family and friends of former Sparrow's Troubadours - Standout composer, arranger and panist Godwin Bowen. 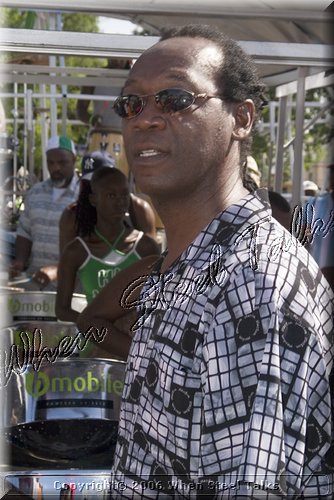 I extend condolences to the family of Godwin Bowen on his untimely passing on Friday (2021 July 16). The Skiffle family greatly appreciated the work he did with the band in 2001 and 2002. He was quiet and unassuming but a giant among musicians, and T&T's music world and Pan fraternity is poorer with his passing.

In 2001 Bowen arranged the Mighty Shadow's "Stranger" for the band. I remember the air of excitement in the panyard as the composition began to take shape and there was a general feeling among the players that this one could take us all the way to the top. We ran 4th in the preliminaries and 3rd in the semi-finals. However we faced some technical challenges on final night and was only able to accumulate enough points for a 5th place position.
In 2002, he arranged Preacher's "Dulahin" for us. Our placing in the preliminaries, semi-final and finals was respectively 7th, 4th and 10th.
I first became aware of Godwin Bowen's talent when he composed his own tune "Posse" for Pamberi in 1989, that is my favorite composition from him. Pamberi placed 9th in both the prelims and semi finals but would gain their highest ever position of 5th in the finals.
I was always of the opinion that he was from somewhere in the East because of his association with Pamberi since 1982, but I would later realise that he was originally from Point Fortin and was related to the wife of a very good friend of mine.
I extend sincere condolences to his family on behalf of the Skiffle family, May his soul rest in peace to rise in eternal glory in the hereafter.

My deepest condolences to the family of Godwin Bowen who was a dear friend of mine. I am the Godfather of his eldest son.

He was the arranger for one of my calypsoes in the late 1970s when we had the annual Kaiso Royal annual staff calypso competition and he did attend that competition to  cheer me on.

While I no longer reside in Trinidad, I would like to contact his family to personally extend my condolences ..

Godwin was a first class musician and a very humble and honest individual and for whom I had the greatest respect.

He will surely be missed ibt members of the Pan Fraternity.