Len "Boogsie" Sharpe speaks on the death of Asami Nagakiya

This is my Japanese protoge and she was on a journey to greatness. What we should all want to know is who planned to rape and strangle her. And what going on with the investigation. Mr Prime Minister and Mr Mayor what we want is for this killer to be brought to justice........ 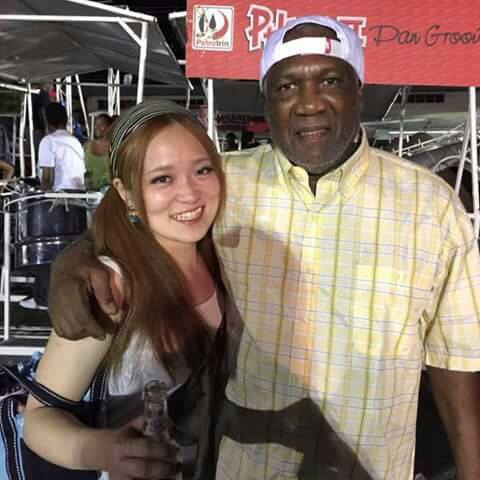 She wasn't under the jurisdiction of panat the time, and for as much as i know, most steelbands always ensure the safety of their players. Ask any female play and they would confirm. To blame the male pan frat. is not much different from the mayor's asinine comment.

In law, there is a thing called partial culpability. I think you would agree that somebody, somewhere could have done more to protect this woman. That is undeniable.

This is what I have being saying for quite a while now it's known personalities like Mr. Sharpe and others who are in our art fraternity must speak out loud when these pieces of shit heads has no respect for human life. What is happening in our beautiful Country by these scum bags is a crying shame. The Prime Minister, the so-call Police Chief, the Mayor and all the rest of those in high places in the Trinidad & Tobago Government where are their voices? These people does not have a clue how to handle the crime situation in Trinidad & Tobago for almost 35 years. They lock up people for years only to set them free back to commit more crimes, and the beat goes on. Don't talk about white color crimes what a Joke no one is convicted. Speaking about saying something, where is the out cry from the Governor of T&T?...what a darn shame. Even the Pathologist don't know what the hell he's talking about, perhaps it would take him another five years to find out that the young lady was indeed raped then strangled. My condolences to her family and friends, may she R.I.P

My condolences to the family and friends of Asami Nagakiya. Any death is painful and regrettable but even more so is untimely tragic death due to murder. I share the hope of many, in Trinidad and Tobago (T&T) and globally, in demanding that the legal authorities in T&T take whatever action is necessary to bring the perpetrator or perpetrators to justice. Nothing short of such action would effectively assuage public anger, fear and disgust at this egregious crime. Viewed from an international perspective, it is not unreasonable to conclude that T&T appears to be fast establishing itself as the infamous murder capital of the world. Too many murders are occurring in T&T on a daily basis unabated and with no end in sight, and too many murderers go unpunished year after year. In 2015 there  were approximately 350 murders in T&T; does this mean that there are 350 murderers freely walking the streets. Given the murder rate over the past few years, does this mean that there are thousands of murderers or are there multiple serial murderers committing these crimes? Where is the collective social outrage among the population? Are these crime events a new normal? As an ex-patriot, I recall an earlier period in T&T when 5 murders recorded in one year drew awe and disbelief; now it would appear that 5 murders committed over one or two days has lost its shock value. unfortunately, I and many of my friends are afraid to visit the land of our birth and many of us have decided to avoid vacationing with our families in T&T. The level of crime as a social phenomenon is a cancer on the soul of T&T which eventually will have a negative and destructive impact on its socioeconomic stability. It is quite foreseeable, in the absence of an appropriate response, that other nation states will either issue travel bans or travel advisories warning against travel to T&T. The eventual result could be denial of foreign investments and trade agreements with T&T. Allowed to continue unchecked, and even more ominous, is the specter of increasing pervasive lawlessness, corruption and erosion of territorial integrity resulting in T&T being deemed a failed state. It does not have to end that way; the current social dysfunction in T&T could be reversed or mitigated with strong decisive governmental action taken in collaboration with security forces of other partner states. I certainly do not have the answers to what must be a complex multi-factorial problem, but the people of T&T deserve better and need to urgently advocate for social justice and order by speaking up and speaking out against the destructive murderous elements within its borders. Asami, may you rest in peace.

Permalink Reply by Peter deLight on February 14, 2016 at 12:37pm
Mr. Spooner:
I believe many, including myself, share your heartfelt sentiments.
The deplorable death of Asami Nagakiya leaves us embarrassed and ashamed.

As per the wisdom of The Doctor, ... The Maestro:–
https://m.youtube.com/watch?v=TLj1QBJmiWE

T&T raise up for Asami, don't let this go down as your ignorant mayor would want it to go. You got support here in Barbados, let justice be done.

Thank you for your support on this Topic Barbados. I am happy to speak to a Holder in Barbados. I worked on the AIDA cruise line and had been in Barbados on the Sunday 31st January. I was a musician on that cruise line, my contract is now done and I am at hone here in Trinidad.

I have been trying for the longest while to Reach any Holder in Barbados for a long time. I am the WEB master for the Holder generation Family tree. I have great info and need more. My Great great grand parents were from Christchurch. Since 1810. The spelling of my last name was changed by my father a "U" was included. You can e mail me at choulderster@gmail.com. thank you.

Permalink Reply by MORNING GLORY on February 15, 2016 at 3:16pm
If Asami and her other Japanese friends,were all staying at Picton court,,didn't any of them see anyone,or anything suspicious,on carnival tues. evening,when she was there ,as was caught on camera. I believe there is more to this crime ,than what people are focusing on. I just hope justice is done swiftly. Where were the police?The Savannah is a known crime area,from since the fifties,especially at carnival time. Doesn't law enforcement know this? Predators have been roaming that Savannah for decades.,Come on COP,,,,,Let's get to the bottom of this now,and make sure this never happens ever again. Too many people have been violated in that Savannah,over the years. RIP ASAMI. BLESSINGS.