Anyone remembers the highly energetic talented band from Finland in the World Steelband Festival in 2000 (Trinidad), playing Kitch's Pan in A Minor?

The arranger, Ari Viitanen, who also made the pans, tuned them, and led the band, was someone who had embraced the national instrument of Trinidad and Tobago, in Karjaa, Finland, wholeheartedly.  Ari passed away yesterday quite suddenly, leaving many behind with great memories of his music, friendship and his unique sense of humour (check his Golden Rules on http://www.dlc.fi/~pan-ari/).

Sincere condolences go to his dear family and friends. Ari, you were a true pan ambassador and will be sorely missed.  It has been a privilege to meet you and play music with you/your band for the European Steelband Festival in Sete, France, 2002.  Thanks for your wonderful contribution to the pan movement.

(Picture shows the band, Steel Pan Lovers, in Sete, France 2002, with Ari on the extreme left)

My condolence to the Ari Viitanen Family on the passing of Ari, I did not  know the Arranger or Tuner but this band was a Great band in the Festival, Job well done, take care Ari, God Bless

For Ari. "Panman I salute you......" lyrics from "For the Love" sung by Denyse Plummer (http://www.youtube.com/watch?v=0gev-yyZlvo) which he arranged for Steel Pan Lovers (https://soundcloud.com/mark-loquan/for-the-love-steel-pan-lovers).

His arrangement can also be heard in Japan with Pan Village performing For the Love (http://www.youtube.com/watch?v=vwUdsGcAOv8)

Sincerest of condolences to all of the loved ones of Ari Viitanen.  Anyone who can adopt another's culture, honor, respect and promote it as Mr. Viitanen did, regardless of their heritage, deserves a resounding standing ovation.  Even though I did not meet Mr. Viitanen, I did feature Steel Pan Lovers' rendition of Pan In A Minor on WBAI 99.5 FM in NYC a few years ago, I've since resigned from WBAI.  But as an Independent Producer at BRIC TV in Brooklyn http://bricartsmedia.org/, I will dedicate a segment of my next Caribbean Perspectives special, date unknown, to feature this extremely talented individual.  Again, condolences to those who were touched by Mr. Viitanen's brilliance.

I am always moved to hear the stories of global pan lovers,  but I am truly impressed with the quality of Steel Lovers execution of Kitch's Pan in A Minor.  Thanks for sharing this with us.

May he rest in peace and condolences to his family and to Steel Pan Lovers.

Condolences from the members and Executive of the British Association of Steelbands to Ari's family and friends. We had the pleasure of knowing and working with Ari over a number of years - particularly when organising the European Steelpan Festival. He was a good man and a talented musician, a real champion of pan. His passing is a great loss not only to the Finish steel band movement but also to the movement internationally. May he rest in eternal peace.

My condolences to his family,  the Finland Pan family in particular, and to Pan in general. I just listened to the arrangement of Kitchener's Pan in A Minor, and can only say that his passing is a deep loss. That is a brilliant arrangement and performance. My he ride on the waves of Pan Music into his next journeying, and may he be received by all those panmen women and composers for pan who have gone before. With deep gratitude for his receiving and loving our humble cultural forms from this Trinbigonian.

I met Ari 10 years ago in Dortmund, while I was still working on the elementary pan level (TeacherPans). Unfortunaltly we did'nt have the chance to organize a meeting between Steel Pan Lovers and Calypsonic Steel Orchestra. Rest in peace, Ari.

Sad news and a great loss to the Pan community and to Finland. Sincere condolences to his family and his band members from Hatters Steel Orchestra, Trinidad. 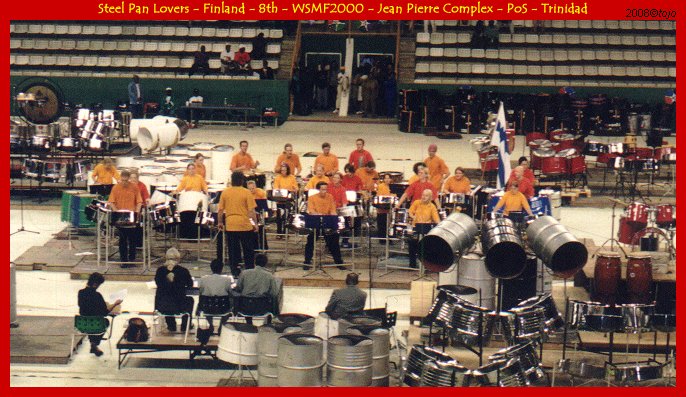 We remember. (If this all fits here) A note and 4 images from

The Steelbands (Pan) of Trinidad & Tobago

Starting in their waste-coats, the band played a melodious Finlandia composed by their late countryman Johan Julius Jean Sibelius (1865 - 1957), as arranged by Ari Viitanen. The performance was delightfully light and loose and had a most pleasing tone now characteristic to the instruments of this band, most of which were made by Ari Viitanen himself. The performance was played with reference to musical scores scanned by the band members.

One of the gems of this WSMF 2000, Steel Pan Lovers were the smallest of the Orchestra section with 26 members including their erstwhile leader Ari Viitanen. This group of young Finnish teenagers, musicians all, so much impressed the spectators in the East stand, that they received the most enthusiastic applause for any band on this finals night.

Waste-coats aside, an informality to the proceedings pleasingly introduced by PANch 2000 earlier in the preliminaries, Steel Pan Lovers now let loose on Ari Viitanen’s arrangement of Aldwyn Roberts the late Lord Kitchener’s Pan in A Minor.

Played with an enthusiasm and verve which equalled anything we could do here in T&T, and with added character totally their own, Steel Pan Lovers presented and pranced to an arrangement of staggering complexity that would have marked Ari Viitanen aserious Panorama contender had he been a resident of T&T. 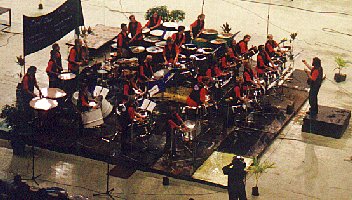 Steel Pan Lovers placed 8th in this competition. Lacking perhaps only in numbers to raise the volume, despite an exceedingly full sound nevertheless; and having intentionally made sacrifice to complexity of arrangement - that appeared to change and grow with each performance, an ability enhanced through playing from a score-sheet - and this was a

sacrifice to the time available to practice, and one that may have diluted the ability of the players in this instance only, to display a tightness in performance sought after by the judges.

Steel Pan Lovers presentations will however, long be remembered; and their abilities set a shining, distinct and endearing model for The Future of Pan, world-wide.