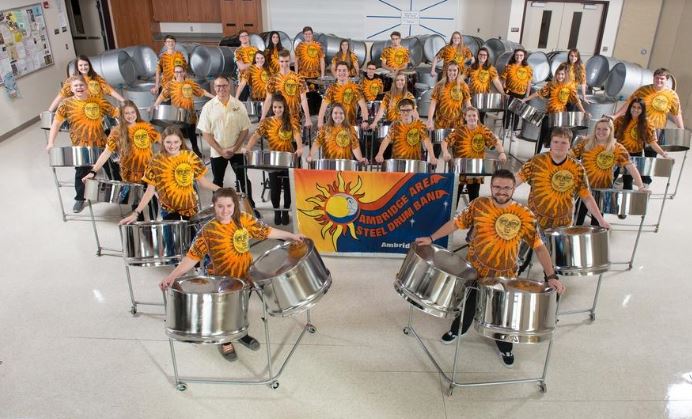 The group celebrates its 30th anniversary with a May 5 concert where it all began: at Ambridge High.

The 3 p.m. performance in the school’s Bridger Theatre will feature guests the River City Brass Band from Pittsburgh and steel pan virtuoso Liam Teague from Trinidad and Tobago, the island that started the steel drum art form. Teague will conduct a master class for the steel band students Friday during school.

The concert marks a good chance for the public to catch up with one of western Pennsylvania’s most sought-after scholastic music ensembles, which averages 40 to 50 gigs a year.

“As an audience member, I love the crowd engagement. Being transported figuratively to the tropics is always fun, especially in Pennsylvania’s never-ending winter,” said Allison (Slinger) Mueller, a steel drum band alum from the Class of 2012.

“As a musician, I was drawn to the steel drum band because it was different,” Mueller said. “It was a completely different style of music from what the rest of the music program offered, and in many ways it was much more engaging than traditional concert or marching band. I absolutely loved the outreach programs. I remember being in fourth grade attending one of these programs myself, and that was the moment I decided that I wanted to participate in the band program; I wanted to be in that band one day.”

Another steel drum alum, Alli Martin, said the program instilled a love of music in her she carries out today as a music therapist at the Watson Institute.

“I watched as the music we created caused our audiences to move,” Martin said. “I learned that music is a tool and a powerful one at that.”

The anniversary concert caps off a school year in which the band made its debut in the WPXI-TV Holiday Parade and returned to Heinz Hall as part of the revitalized B.E. Taylor Tribute/Christmas shows.

“We were honored to be one of 35 ensembles from 13 states to be selected by audition to perform at the National Association for Music Education/Pennsylvania Music Educators Association conference April 4 at the David L. Lawrence Convention Center,” the band’s director, Todd Hartman, said.

Ambridge High senior Lydia Ciani said the experiences afforded her as a steel drum band member have helped her become a better person and musician.

“I believe that this happens to everyone involved,” Ciani said. “What we do as an ensemble is something that I haven’t experienced anywhere else. Because all of us are so special in our own ways, we create one special group that can perform in ways many people probably haven’t experienced before. To an audience, being able to see magic happen during a performance is something that makes them feel as if they are part of the performance, too.”

The Ambridge steel drum band came to life in 1988, launched by longtime band director Sal Aloe, who had five sets of steel drums (or “pans”) to work with and a handful of students willing to learn the instrument after school.