On Saturday August 27, 2016 the Carlos Lezama Archives and Caribbean Cultural Center (CLACC­-C) will host its annual ​Children’s Festival and ​PanFest, which showcases junior talent and Caribbean heritage. The festival is held at the CLACC­-C museum grounds, a landmark brownstone located at St. John’s Place between Kingston & Brooklyn Avenues. The festival will run from noon to 7 p.m.

PanFest is one component of the ​CLACC­-C Children’s Festival​, now in its sixth year. The junior steel pan competition includes some of Brooklyn’s youngest steel band members. Steel band performers include, ​Crossfire, ADLIB, Pan Stars, Triumphant Stars, Harmony, Higher Levin, Pantonic, C.A.S.Y.M. and Pan Evolution. “The festival is a show for kids, by kids,” Lezama­-Clark, president of CLACC­-C, states. “We want to ensure that the community and children who participate in the festival ​ leave with a better understanding and appreciation of the culture.”

The ​free annual festival includes live performances by junior calypsonian, Young Devyn, The Untouchable Dancers, and more. There will also be Back-to-School giveaways, face­painting, a bouncy house, games, dancing, clowns, music and food to add to the festivities.

ABOUT CLACC­-C
The ​Carlos Lezama Archives and Caribbean Cultural Center (CLACC­-C) is a non­profit institution devoted to the development, promotion and preservation of Caribbean culture and history through the collection of archives and art memorabilia. Established in 2005, the CLACC­-C ​mission is to educate communities regarding Caribbean heritage. It promotes and preserves West Indian Culture and history through the growth of an archive center dedicated to the legacy of Carlos Lezama, the “​godfather” of Brooklyn’s annual Caribbean Carnival on Labor Day. 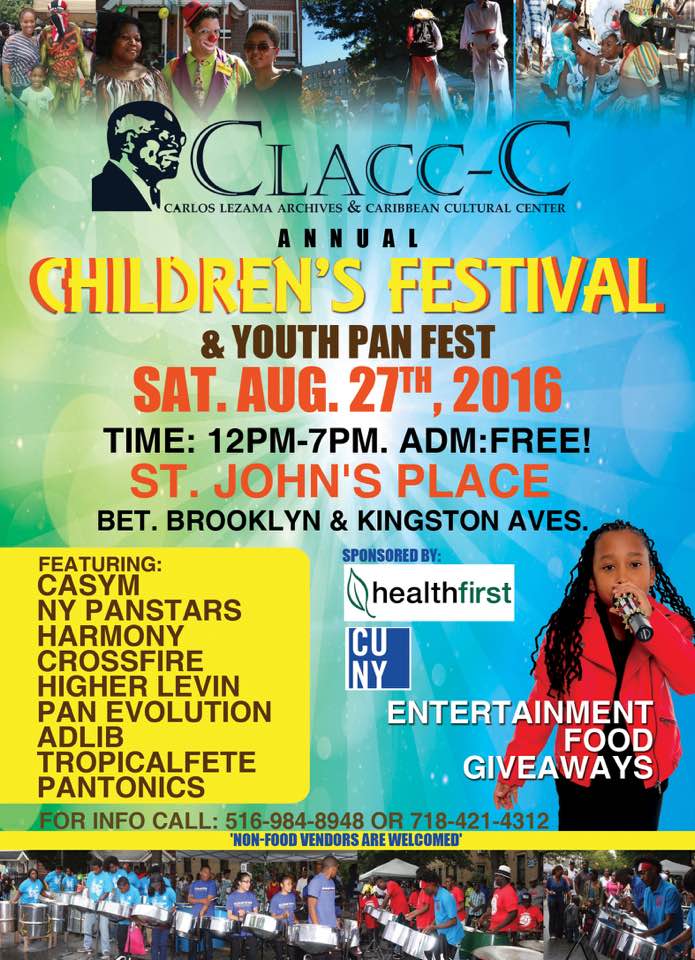 RSVP for CHILDREN’S FESTIVAL and YOUTH PANFEST to add comments!