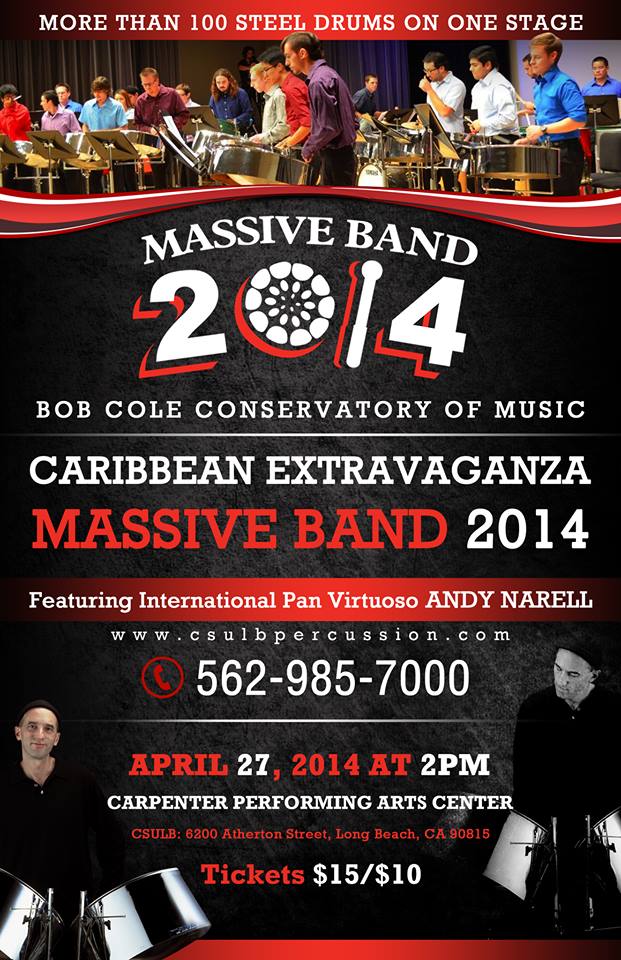 The annual CSULB Steel Drum concert Caribbean Extravaganza gives way to a massive band of steel drums on Sunday, April 27, 2014. The concert features the CSULB Steel Drum Orchestra during the first half, and after intermission international steel drum virtuoso Andy Narell joins the orchestra, along with local steel drum ensembles including the Rusty Steel Drum Band, Lakewood Steel, and groups from Westminster High School, Campbell Hall, Granada Middle School, and Cabrillo High School. More than 100 steel drums and performers will be on the Carpenter Center stage.

Under the direction of CSULB faculty percussionist Dave Gerhart, the Massive Band will perform music by Lord Kitchener, Dave Gerhart, Frank Zappa, Bob Marley, CJ Menge, Ray Holman. The second half of the program also includes three original compositions by Andy Narell led by Narell himself. Narell is widely recognized as one of the best steel drum performers in the world. With his first solo album in 1979, he took the steelpan out of the steelband and brought it into the jazz world. With every album since, he has explored the possibilities and expanded the role of the pan in contemporary music. He has worked with artists as diverse as Chucho Valdes, Bela Flack, Willie Colon, Flora Purim and Airto, the Metropole Orchestra (Holland), Tito Puente, Mokhtar Samba, Nancy Wilson, Toto, Aretha Franklin and the Kronos String Quartet. He has performed on movie scores by James Horner, Maurice Jarre, Elmer Bernstein, Hans Zimmer, Michel Colombier, and Thomas Newman. As a bandleader he has played hundreds of concerts and jazz festivals throughout the USA, Canada, Europe, Japan, the Caribbean, South America and South Africa. In 1999, Narell became the first foreigner to compose for Trinidad’s Panorama steel band competition, guiding the 100-player Skiffle Bunch Steel Orchestra to the finals of both the 1999 and 2000 Panoramas. In 2007 he collaborated with the Trinidad All Stars for a concert of his steelband music at the Trinidad and Tobago Steelpan and Jazz Festival. Narell grew up in Queens, NY, and moved to California in his teens. He studied music at UC Berkeley and now lives in Paris, France, where he runs Calypsociation – a steel drum school.

“Massive Band 2014 is a opportunity for local steel drummers to come together to celebrate the national instrument of Trinidad,” Gerhart said. “This is a once in a lifetime opportunity for our students to perform in a 100 piece steel drum ensemble and share the stage with Andy Narell.”

The Massive Band concert takes place on Sunday, April 27 at 2pm at the Richard and Karen Carpenter Performing Arts Center on the campus of Long Beach State University. Tickets are $15 for the general public and $10 for students, seniors and those with CSULB ID. Call for tickets at (562) 985-7000 or visit the Arts Tickets Office online at www.carpenterarts.org.