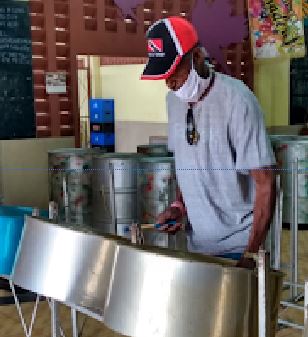 At three score and ten, plus six, with a mind as sharp as it has ever been, it turns out worshipping took a toll on his knees. How did that happen? Well, for a couple of months, on mornings, he would go to the pan yard, in St Barbs, which he built from scratch for his community having successfully negotiated the value of the steelband, just as inventor/ leader/musician Rudolph Charles did, in the days of the first prime minister Dr. Eric Williams.

At the pan yard, for at least two months, Anthony Kinsale, Benup, took out his double seconds and played for about two hours, the gentle hands sending musical notes around a community locked down by COVID, no less. The soothing sounds of gospels would flow up the hills and fill the little valleys. By its mystic the Steelband is community work and he was still paying his dues. At six o’ clock in the morning, after he turned off the lights in the pan yard, Blessed Assurance (see Bands performance below) and How Great Thou Art would lead to a few Christmas carols that lifted hearts and souls in the early morning silence.

Happy Birthday " Big Brother", keep up the good work may God continue to direct your steps

Thanks very much for this interesting and enlightening article, Sharmain Baboolal. It adds much to our annals of the graphic past of our steelbands.