A team developing a portable steel pan to play in a steel drum orchestra won second place, and funding to the tune of $1,000. Panifold team members didn’t have a keyboard at the beginning of the weekend, so they bought one off Craigslist and hacked the parts together to create the initial prototype, dubbed “Project Taco.” With the digital steel pan, the idea is to create a product that lightweight, collapsable and affordable so that students who participate in youth steel bands can also have an instrument to take home and practice.

The organ was never an acoustic instrument.

They did not kill the acoustic versions because they were still easier to transport or sounded much better.

The organ was indeed an acoustic instrument 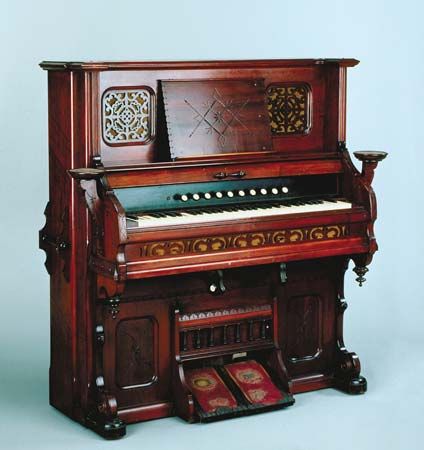 The earliest known organ was the hydraulis of the 3rd century BCE, a rudimentary Greek invention, with the wind regulated by water pressure. The first recorded appearance of an exclusively bellow-fed organ, however, was not until almost 400 years later. By the 8th century organs were being built in Europe, and from the 10th century their association with the church had been established. The 15th and 16th centuries witnessed significant tonal and mechanical advances and the emergence of national schools of organ building. By the early 17th century all the essential elements of the instrument had been developed, and subsequent developments involved either tonal changes or technological refinements.

It was during the High Baroque period that the organ reached its greatest popularity and found its most important composer in Johann Sebastian Bach (1685–1750). There existed at this time two principal schools of organ building: the French, with its colourful reeds and mutations, and the German and Dutch, with their outstanding choruses.

After the death of Bach, organ building entered into a gradual decline, most particularly in Germany and England, where organs built after 1800 were of increasingly poor tonal quality. There was, however, more emphasis on orchestrally imitative stops. The 19th century also saw the widespread introduction of reed organs, such as the harmonium and the melodeon. Reed organs produce sound by using freely vibrating reeds (rather than the beating reeds used in the reed pipes of pipe organs), usually without resonators. Smaller and less complicated than pipe organs, they remained popular in homes and small institutions until the early 20th century, when they lost ground to electronic organs and mass-produced pianos.

I stand corrected. But I eh counting bellows and pipe!

"and subsequent developments involved either tonal changes or technological refinements."

Bugs and Randi: I am glad that you all brought out this discussion because I long thought about the line above as it relates to PAN. I could see some silicon chips being embedded in the PAN to add tonal changes.

Ah ah eh dead before all these changes take place!!!

But back to the topic: PAN in AMERICA is spreading like wildfire. It may be in DANGER in Trinidad but it  is flourishing in THE USA!!!

Your visions are much closer to reality than you think.  With the massive commitment to and investments in, Augmented Realty (AR) and now to a lesser extent Virtual Reality (VR) products, the future is here. The potential for new and emerging technologies in entertainment, musical and educational applications that are rooted in AR and VR are out of this world. Hopefully, the folks at UWI are already on it in terms of the Pan. It's already very late in the game.