When Steel Talks extends condolences to the family and friends of arranger David “Peck” Edwards. He was an outstanding musician. 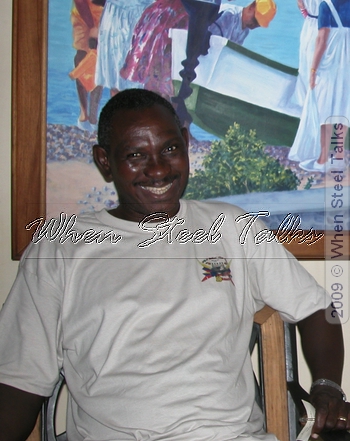 Veteran Grenada pan musician and arranger, David “Peck’’ Edwards, has died at his home in St George’s. Edwards, who also is a former national athlete and GBSS graduate, was ailing for some time and the steelband fraternity organized a musical fundraiser for him last year.

His involvement with pan started with City Symphony and he arranged for New Dimension, Suzuki Pan Wizards and Rainbow All Stars of St Andrew.

Edwards, who also was employed as a journalist with Radio Free Grenada, also worked with government as a cultural officer.

“I’m happy I spoke with him on Friday,’’ said Ambassador Derrick James, Grenada’s consul general in Toronto. The two were boyhood friends and played pan together.

My sympathies to  Peck's family.  I learned to play pan from him at a community group that he lead when were living in the Caribbean on our small sailboat, probably 2003.  It was my hurricane season project.  I would take a bus to and from our anchorage in Woburn, spend time in town and then the pan yard.  It was so fun to learn pan with such a wide group of ages and backgrounds.  Man, he was a tough teacher.  I would go back to our boat and practice on a pan I had drawn out on newspaper. Bought a pan in Trinidad  and now play with a college ensemble in MN.  I will never be a great pan player, but what I lack in skills I make up for with enthusiasm.  I attribute it all to Mr Edwards.

Gone but never forgotten. RIP Mr. Edwards aka Peck. You taught me well.