Do arrangers of pan music seek consent of composers?

THE EDITOR: Are writers of original musical compositions approached by pan arrangers to rearrange their original compositions? If so, are composers compensated from the prize monies won from the Panorama competition?

Customarily, steel pan arrangers choose a piece of existing music, which is further modified and presented as an innovative piece for the Panorama competition. This new musical arrangement, which incorporates the pre-existing composition, is called a “derivative work.”

A derivative work must not be confused with a cover version. In the case of steel pan arrangements, a cover version is a direct interpretation or rendition of an existing composition without substantial alterations to the melody and musical arrangement.

Conversely, as stated above, a derivative work involves significant alterations and changes to an existing musical composition.

Copyright consists of a bundle of rights that grants composers the right to authorise and prohibit certain actions with respect to their original musical compositions.

Included in the list of rights is the right to create derivative works. From this perspective, anyone performing such actions without prior permission is seen as violating a composer’s rights.

This begs question: do pan arrangers obtain authorisation to alter, change, rearrange, and even modify original compositions? Provided this is not a common practice in TT, it does not in any way mean it is permissible.

It would seem the steel pan fraternity has overlooked this fundamental principle for decades without realising the implications of such action.

COMPOSERS OF ORIGINAL MUSIC take their score to steelbands. Sometimes even before they go to the studio, hoping, that steelbands will be attracted to their song, and make it their tune of choice at panorama.

You see Mr. Alfonso, it was always an honor for composers of original material to have their song played by a steelband at panorama. It vindicates their creativity, and helps to popularize their song.

Do you know that singers of the song being played by a band may usually wave that steelband's flag for free on the big stage in the savannah for panorama?

You see Mr. Alfonso, that is free promotion for the artiste, that is free airplay for at least 15 - 20 minutes of that artiste's song while the band is setting up. Quite likely a significant amount of information will be shared about the artiste with the viewing audience, across a wide range of media.

Would you be inclined to accept that Exodus did for Kes' SAVANNAH GRASS more that the road march could?

You have this position backwards.  Over the last two decades, composers of Caribbean music have been sending their compositions to When Steel Talks with the hope that a steel orchestra will choose their music works, as their tune of choice for the upcoming Panorama after WST posts it.

Some of the biggest names in Caribbean music have been part of this process - offend submitting both lyrics and lead sheets well before the offical start of the carnival season.

More often than not you will find the performers of the songs on stage with orchestras during their Panorama finals performance.

It was only last year that Kes, spoke about how he dreamed about having a steel orchestra perform his "Savannah Grass" for Panorama. Kes also sent his material to WST to post so that the bands.  could hear and consider his song. And as luck would have it Exodus Steel Orchestra played "Savannah Grass" in the finals. You can find Kes on stage with the band as the flag carrier. He seemed quite pleased.

With all respect Fabien Alfonso......yuh gettin tie up with this topic

It seems that this is another area in which our national practice is not in line with international copyright laws and maybe even with our own copyright laws.
We should not wait until some composer objects and decides to take the matter to the courts for a legal determination. It's an opportunity for PanTrinbago, Tuco< COTT and others including the legal profession to have a public discussion and if necessary propose solutions. that would satisfy the rights of composers, arrangers and the enjoyment of the public.
Now might be the right time as the competition is still on our minds.

Panorama is a competition put on by Pan Trinbago, where the arrangements of original compositions are performed (not sold), therefore if it is anyone's responsibility to ensure that royalties are paid to composers of original material, more that likely I suspect it will be the promoter of the show.

I appreciate your contribution, Mr. Providence, It seems that you are certainly passionate about this topic. From what you have posted here, clearly shows that it is important for stakeholders within the Steel Pan Fraternity to have meaningful workshops with a qualified panel of experts to explore and examine the copyright component regarding all things pan.

I can say this though; award shows and competitions such as the X-Factor and American Idol, etc, these productions always ensure they have the required Intellectual property clearances, in black and white, before the show airs...these things happen behind the scenes.

Also, I'm not privy to the agreement ASCAP has with its members and what ASCAP is authorized to do on its members' behalf. However, see the responses I have posted bellow within the FB thread as to what COTT is Authorised to do and Not Authorised to do. Such information is crucial to this conversation.

From the When Steel Talks Steelband Music Facebook Group... 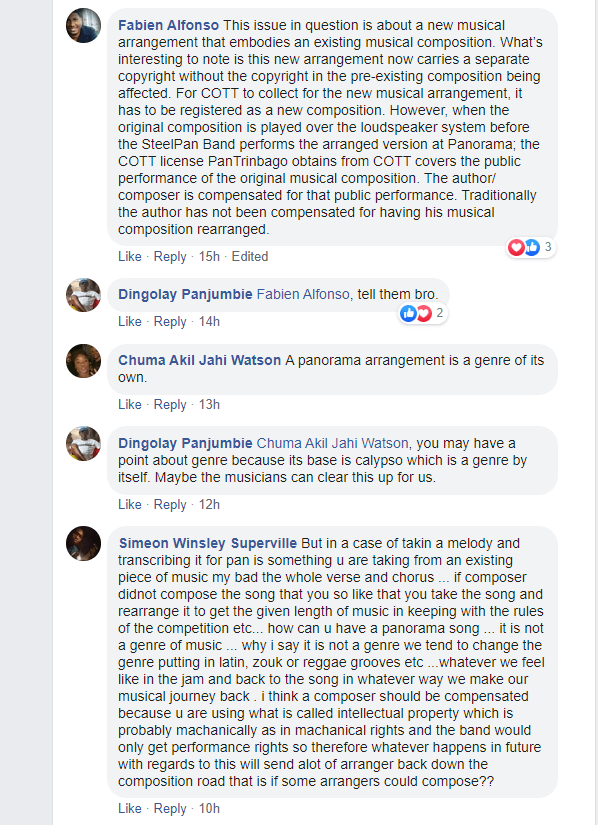 Great discussion, I’m not disputing the honor that's bestowed upon a composer when a steelpan band adapts and performs his original composition. The concern is the actions without any form of paperwork between the composer and arranger. Maybe composers need to be educated about what they are entitled to before allowing others to use their intellectual property at no cost in exchange for promotion and exposure. We have a unique music industry, its time for us to be open-minded about introducing a business model that’s in line with international best practices. While exposure for a composer is noteworthy, it must be understood copyright law among other things extends to the financial opportunities it creates for both composers and arrangers whenever their works are used in various ways.

I trust our business model can be structured around an eco-system where everyone's financial potential can maximized.

Mr. Alfonso: Nice to see you on THE FORUM. My friend (MR. BUGS) wants to know what is YOUR SPECIFIC INTEREST in this particular issue.

Greetings Mr. Gonzales, can you direct Mr. Bugs to my response above your question? It identifies my overall interest in this issue. But let me again emphasize that we need to structure a business model among the steel pan fraternity that’s in line with international best practices, one where composers, arrangers, players et al. can truly maximize their financial potential.

I have serious concerns. The relationship between the the steelband and the composers is one that has developed and grown over the years organically. Historically, speaking whenever this natural occurrence has been disrupted it has been a lose, lose, lose situation for the community and original participants,

I'm sure you are familiar with De'Fosto's tune about Whe Whe vs Play Whe. He use to win when it was Whe Whe. After it became Play Whe he can't win ah t'all.  Folks use to by homes with their su su. And no paper work. Now we have plenty paper work and bank loans that only a select few can get to buy homes.

Mr. Alfonso are you an agent for a specific artist or artists. And going forward, have you contacted Pan Trnbago?