Do the limbo! How the Windrush brought a dance revolution to Britain

The Caribbeans who answered the call to save postwar Britain sparked a dance explosion. A new show relives those heady days 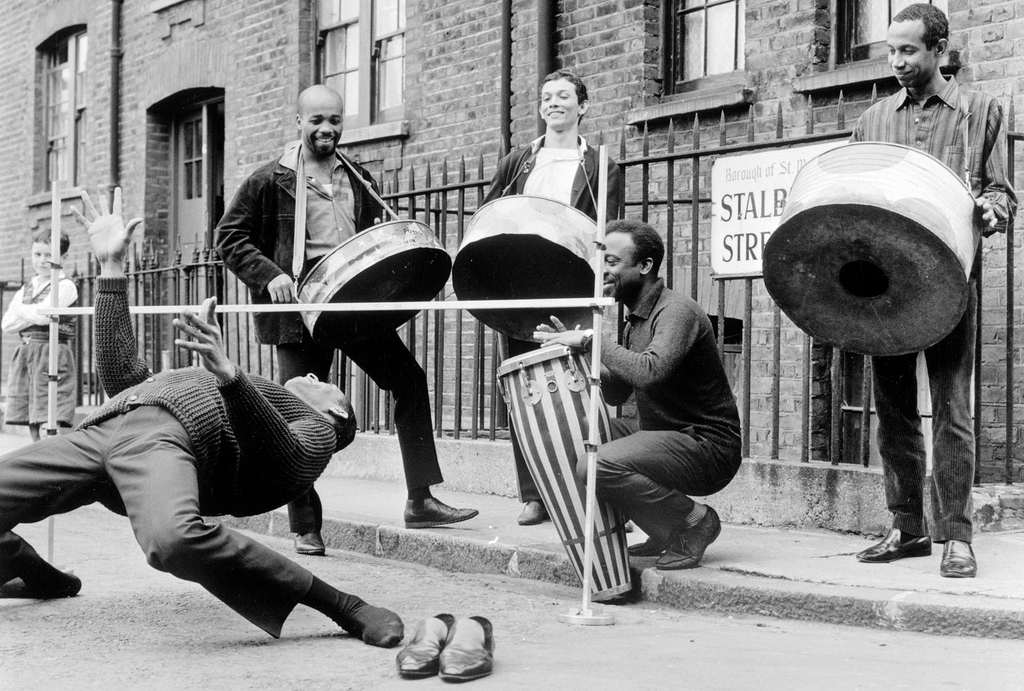 Street limbo … The Irwin Clement Caribbean steel band in London, 1963. Photograph: Heritage Images/Getty Images
When the Empire Windrush docked at Tilbury in 1948, the Trinidadian singer Lord Kitchener was among the 492 Caribbean passengers arriving to begin a new life in Britain. Journalists mobbing the Essex docks asked the jauntily debonair Kitch to sing for them and, barely missing a beat, he responded with his newly composed calypso, London Is the Place for Me.

Kitch’s optimistic lyrics embodied the hopes of the estimated 170,000 Caribbeans who would follow him over the next decade or so. They were drawn by the 1948 British Nationality Act, which gave them rights of settlement, and by a huge advertising campaign in which Britain promised excellent jobs and wages to all those who would come to help rebuild the nation after the devastation of war.

“They had a good home in Jamaica,” says Sharon Watson, director of Phoenix Dance Theatre, which has created a new work to mark the 70th anniversary of that first wave of immigration. “But they felt that a call for help had come out from the motherland. They were part of a generation who held England in such high esteem that they believed it was their duty to respond.”

Windrush: Movement of the People is based partly on Watson’s own parents’ journey from Jamaica to Leeds in the 1950s, emphasising the loyalty that motivated them to go through such an upheaval. It felt horribly poignant to Watson that, having set out for the UK with such high-minded hopes, her parents encountered so much cruelty.

The racism of 1950s Britain was brutal, Watson says. “My mother wept and wept once she started telling me about it: ‘When the call came out we answered it. But we arrived to all these notices saying: No dogs, no blacks, no Irish. That really hurt.’” Equally shocking was the standard of living. “My parents thought they would be lush with money. But the wages were so meagre, people were living one family to a room.”

Worst of all perhaps, her mother and father had to come to the UK without their children. It would be nine years before they could afford to fly all five over. So Watson, who was born in Leeds, did not meet her youngest brother until he was 14. Yet for all the grimness of her parents’ initial struggles, Watson has chosen to also focus on the successes they and so many others made of their lives, highlighting the profound ways in which the Windrush generation went on to shape the culture of their new home.

I don't know how allyuh  get this photo, PanTimes, but ah want mih Royalties....this was taken in 1963, and left to right, we have Stretch Cox(limbo) Irwin Clement, Brian Henderson, Horace James, and Ralph Richardson....Stretch, Irwin and Horace have all passed..may their souls R.I.P...Just Ritchie and myself still going

Much respect to you Mr. Henderson and all the veterans who paved the way for Pan on a global stage. We salute you.

Thanks, PanTimes...I salute you too, for trying to preserve, and keep Pan going down in T&T

Permalink Reply by Charles Assevero on April 19, 2018 at 12:25am
I knew Clem ( Irwin Clement) from he being a member of Dem Boys on Lockhart lane In Belmont, I was member Of Dixieland back in 1954, 55, 56 We communicated Via Email London, USA. I was sadden when he passed a few years ago. He was a great Guy. Sincerely Charles Assevero, Plano , Texas , USA() keep on keeping on. Mr. Clement was also a member of Dixieland for a few years. Being born and growing up in Belmont until 1956 was a blessing.