Their feud stemmed from dif­fer­ent views on The North Park at Car­ni­val City, which was de­vel­oped un­der the NCC last year. 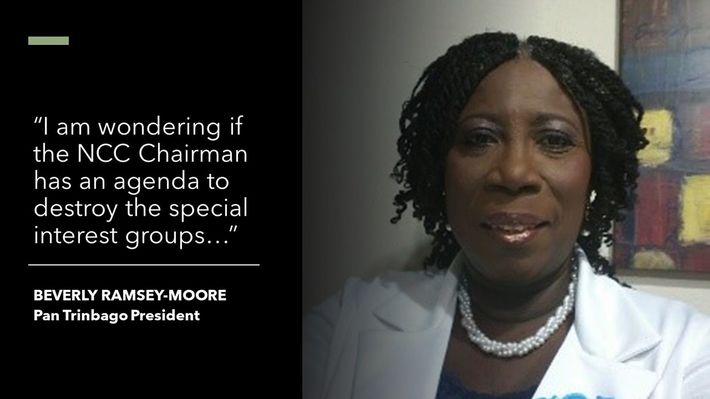 Once she hear that she getting that GIMME GIMME MONEY (tomorrow) -- she get bad like UNRULY ISIS!!!

Is this the SAME BEVERLEY RAMSEY-MOORE who was KISSING UP TO GYPSY just one year ago "embracing" the NORTH PARK?

Posted·
4 hours ago
Finally, the bacca-nal has started as each and every year as a rule it happens. Quick polite question............ Who pays for all this?

Cecil Hinkson: I will DEFEND THE BEV for a change.

PANORAMA is the BIG (and only?) REVENUE EARNER for PAN TRINBAGO. And LAST YEAR, Gypsy get ah vapps and decide that he is a big EVENT PRODUCER (and he foolishly said that he SEE carnivals ALL OVER THE WORLD so he knows how to PRODUCE a CARNIVAL EVENT) and he went and come up with this NORTH PARK idea which everybody knew was going to be a bust.

Well, this year, with funds as scarce as they are, and BEVERLEY knowing that the NORTH PARK will be another disaster this year -- THE BEV came up with a PAN CITY CONCEPT that she thought could bring back the THREE MILLION in REVENUES that was TYPICAL before the GYPSY NORTH PARK DISASTER.

But, of course, GYPSY'S ego will not let BEVERLEY OVER RIDE his CREATION -- so he decided to BLANK her PAN CITY PROJECT.

Now it comes down to whose side you are on!!! But I think that BEVERLEY should have tabled the idea months ago and not wait until the last month to try to re-invent the wheel.

So I cannot really fault BEVERLEY for FIGHTING DOWN GYPSY because PAN TRINBAGO cannot afford to lose another TWO MILLION in revenues at this critical time -- especially when PANORAMA is their ONLY CHANCE to really RAISE SOME SERIOUS FUNDS.

On the other hand, GYPSY has ALL THE POWER and I am not sure that DOCTOR DOLLY has forgiven THE BEV for the CARIFESTA EMBARRASSMENT. But in the end they will come to a resolution that I hope satisfies both egos and brings back in the THREE MILLION DOLLARS.

Now the ALL YEAR PANORAMA was a very bad idea, especially because of WHEN PANORAMA FUNDS are actually disbursed (yuh see how they had to produce the shows with NO MONEY and almost had to cancel the show tomorrow for lack of funds -- and they eh getting that money until yesterday or today).

The question still remains whether BEVERLEY and THAT EXECUTIVE could turn that PAN CITY CONCEPT into a POT OF GOLD once they twist GYPSY'S arm and put their idea into ACTION -- I DOH KNOW!!! I DOH KNOW!!! Cecil you TELL THE BEV WHAT TO DO!!!