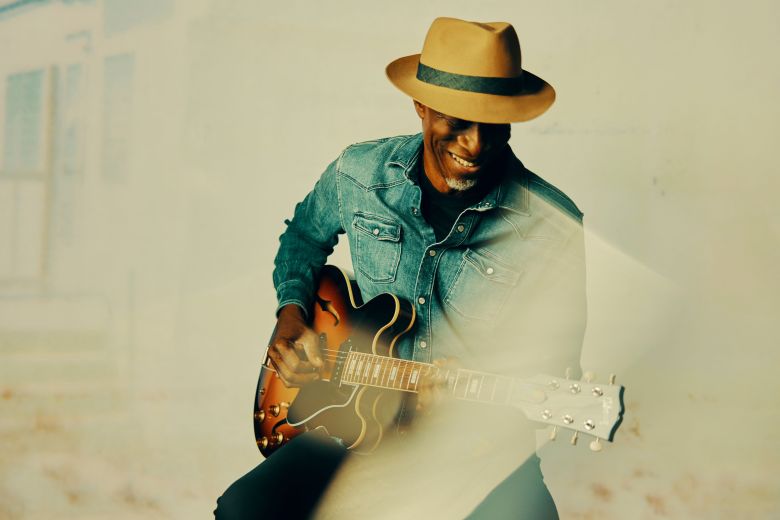 Grammy-winning blues star and Compton native Keb’ Mo’ is releasing the 13-song “Good to be” album on Jan. 21. The new album was written between his homes in Nashville and Compton. (Photo by Jeremy Cowart)

Although he’s a five-time Grammy winner who has collaborated with musicians such as Willie Nelson and Bonnie Raitt and has performed at the White House, when Keb’ Mo’ walks around his hometown of Compton, the respected bluesman goes unnoticed by most.

And that’s fine with the 70-year-old guitarist, who has a new album with a title track paying tribute to his city.

“No one knows me in Compton but I love being back in Compton and this album is a real pinnacle accomplishment for me, it’s probably my best album,” the 70-year-old musician, who will release the 13-song “Good To Be” on Jan. 21, said in a recent telephone interview.

Recorded between Nashville, where he has lived for more than a decade, and Compton at his recently renovated childhood home where he now lives part time, the album is a celebration of his roots, his long musical evolution and his positive outlook on life.

But while he’s earned his accolades in the blues genre, the guitarist, who asked that we refer to him as Keb’, said this is no blues album.

“I look at it like a playlist. It’s not an album, it’s like a radio station but it’s all Keb’ Mo’ and every song has kind of  a different vibe to it but they all fit in the same station,” said Keb’, who’s on tour in support of his album but won’t be back close to home until April 10 when he performs in Orange County at Musco Center for the Arts at Chapman University and April 24 and 26 when he performs at the Belly Up Tavern in Solana Beach.

Born in Los Angeles as Kevin Moore and raised in Compton, Keb’ grew up during the time years before gangsta rap put the city on the musical charts.

“I was there during my formative years. That was the old Compton, we used to call it the Comptons, you know, kind of like the Hamptons,” he said. “My Compton was a very tame Compton. We walked to school everyday, Compton had a symphony orchestra.”

Keb’ grew up listening to blues, R&B and gospel. He played French horn in the school band at Compton High and outside of school he played the steel drums in a calypso band.

“I was musically educated in Compton and we played in L.A., we’d go out to San Diego, we would play in Hollywood,” Keb’ said of his early band days.

He lived in Compton until 1969 and after switching from percussion to guitar he moved to L.A. to pursue his musical career, finding success as a songwriter, arranger and guitarist playing and recording for various bands. At 21, Keb’ landed a gig in Papa John Creach’s band.

He released his first solo album, “Rainmaker,” in 1980 under his birth name. But he started gaining more attention with a self-titled album under his stage name Keb’ Mo’ in 1994.

Two years later he won his first Grammy for Best Contemporary Blues Album for his second record “Just Like You,” cementing his reputation as a blues artist who effortlessly draws from all sorts of genres including rock, pop, country, soul and R&B.

All of these musical influences are evident on the new album.

“I do what I want. It makes me very happy. I love the blues but I don’t want to just do the blues,” he said.

Co-produced by Keb’ and country music star Vince Gill, “Good To Be” includes appearances by other artists including Darius Rucker, Kristin Chenoweth and members of Old Crow Medicine Show.

The title track “Good to Be (Home Again)” is a clear tribute to his hometown with a recently released video that follows Keb’ driving around the city in a classic convertible hitting some local spots such as Patria Coffee Roasters and the Barberizm barber shop. It also features appearances by the Compton Cowboys, who ride along on their horses as Keb’ sings “back on the block, back in the hood, who would have known that it would feel so good.”

New kid on the block

And Keb’ is on his old block a lot more now after buying his childhood home about three years ago and completely renovating it.

“It just feels good being there,” he said. “It’s so full of memories, so grounding for me to be in the neighborhood.”.

While the title track is an homage to his hometown, the rest of the album doesn’t follow the same theme since it’s filled with songs that talk about other topics, including love, on tunes such as  “Good Strong Woman,” which features Rucker.

“It’s about the pandemic,” Keb’ said before reciting some of the lyrics from the song.

“Everybody’s doing the best they can, we all just waiting on the medicine man,” he said.

There are also songs about Southern California, including “Sunny and Warm,” which is driven by Latin percussion.

“It’s just about going to the beach,” he said.

“I think this album is a nice journey, so to speak, a musical journey and it’s fun,” Keb’ said.

Now that his journey has brought him back to Compton, Keb’ is enjoying being a homebody hanging out with his sisters and friends at his childhood home and in his old neighborhood.

And while he’s often recognized back in Nashville, in Compton he just enjoys being Kevin.

“No one knows me in Compton, except the lady two doors down. She still lives there, she was there when I moved into this place,” he said.

“Here I’m just some old dude,” he said with a laugh.