G. Allan O'Connor, founder of the NIU Steelband program, has passed away 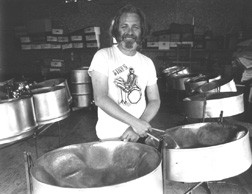 G. Allan “Al” O’Connor was a native of Long Island, New York, and earned his Bachelor of Music Degree and Performers Certificate from SUNY-Fredonia and a Masters in Percussion Performance from the University of Illinois.

At Northern Illinois University (NIU), in 1973, Al O’Connor was the first person to establish an actively performing steelband in an American university, and in 1987 he created a steelpan major field of study within the NIU School of Music. O’Connor was appointed NIU’s Head of Percussion Studies in 1968 and served as Associate Dean of the College of Visual and Performing Arts from 1989 to 2000. He retired from NIU in 2002.

Following the early success of the NIU Steelband, Al was instrumental in starting steelbands at numerous colleges and universities throughout the United States, and took the NIU Steelband on several tours including performances at Yankee Stadium and noted international conventions. Under his direction, the NIU Steelband performed in Taiwan several times as well as in South Korea, and placed 2nd in the 2000 World Steelband Festival in Trinidad.

For 29 summers Al was also a faculty member at the Birch Creek Music Center in Door County, Wisconsin, where he initiated and directed the Steelband program. He was the recipient of seven grants from the National Endowment of the Arts, and composed 25 works for steelband and arranged more than 70 others. O’Connor also received 2014 PAS Lifetime Achievement in Education Award

"Around 1973, Chief Cal Stewart of the U.S. Navy Steel Band heard the quality of Alexis’s steelpans, hired him to tune for the band, and purchased an entire set of instruments. As fate would have it, another important figure in the steelband world, G. Allan O’Connor from Northern Illinois University (NIU) happened to hear the U.S. Navy Steel Band and approached the members inquiring who had tuned their instruments. Their reply: “Clifford Alexis from St. Paul, Minnesota.” By this time, Alexis’s reputation as a steelpan builder and tuner was widely known across the United States and the Caribbean, and when O’Connor finally tracked down Alexis several years later, the two men formed an instant friendship. For the next few years the pair drove steelpans back and forth, or met halfway between St. Paul and Chicago.

In 1985, the robust steelband program at NIU was at a crossroads, and O’Connor decided to put an offer on the table for Alexis: Take a one-year leave of absence from St. Paul and see if you like teaching steelpan at NIU. Alexis accepted, and the rest is history."