Keith Byer, running for president of Pan Trinbago. On 90.1 FM Sunday 2pm to 5pm. Call in and ask your questions.

Keith Byer, running for president of Pan Trinbago. On 90.1 FM Sunday 2pm to 5pm. Call in and ask your questions.

What about Cari Pan?

Ent he was the man in charge?

Did he thief all the money?

Did he lie about his involvement?

Would he just be about his band’s interests?

What is his band’s status?

Are they functioning and at what level?

What is his role in his band’s success?

Does his band positively impact on his community?

What kind of relationship does he have with neighbouring bands and bands from his region?

Does he have a history of helping others in the steel band movement?

Is he just another dictator?

Is he looking for a pay day?

Would he ensure constitution reform is first on his agenda?

What are his plans to fix the image of Pan Trinbago?

What are his plans to fix the financial status of Pan Trinbago?

What are his strategies to make the steel pan industry lucrative both locally and abroad?

Who are the people he has surrounded himself with and what value do they bring to his vision?

Why should we choose him above the rest?

After the mess the executive made, what brand of mop and bucket does he have to clean up their mess?

Why should his credentials disqualify him or cause concern about his integrity?

He must've been doing something right as President of Diatonic Pan Institute, I'm just going by his resume'.

The scope of responsibility should give us an indication of his managerial experience and expertise. 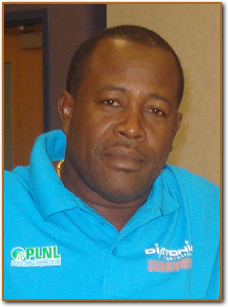 Mr. Byer is a retired Petrotrin  Senior Technical Supervisor who started his steelpan career as a player with Siparia Deltones in 1980. He later became Manager of Deltones in 1994 before being elected Assistant Secretary of the South Central Region of Pan Trinbago. Mr. Byer subsequently held the post of Chairman of the South Central Region of Pan Trinbago before being elevated to the post of Vice President of Pan Trinbago a position he served for ten (10) years. Mr. Byer has held numerous other positions including Vice Chairman of Vision 2020 Culture and Attitudes Committee, Chairman of the Ellis Knights Commemorative Committee, Manager of Silver Stars Steel Orchestra and General Secretary of the Caribbean Steelpan Association (a position he continues to hold at present). Mr. Byer has been responsible for a number of major projects in the steelpan industry, including the first and only Caribbean panorama to date held in Grenada and the first and only Caribbean Junior Festival to date held in Antigua. He is the founder of Diatonic Pan Institute.

Anybody who worked for PETROTRIN done get THEIR SHARE already.

Why not another if that was so successful?

Let us see CVs in Pan Business for ALL who are offering themselves.

I know Byer does not qualify but I must hasten to add ,who does??

Too much traffic for the PIPELINE!!! The stream only spinning around!!!

Mr Mohammed inside the discussion.

I want to see the WHOLE LIST AH CANDIDATES!!!

BYER getting PRESSURE on THIS FORUM and the CAMPAIGN eh even START YET.

Good thing I eh running for NOTHING. I just want to be appointed GLOBAL MARKETING DIRECTOR FOR STEELBAND MUSIC by whoever win. Even if it is KEITH DIAZ.

And I want the rights to produce a GREATEST HITS PANORAMA CD. But with today's technology I could get a good AMERICAN MUSIC PRODUCER to produce that CD without even using ONE LIVE PAN or PAN MAN. And we could make our own ARRANGEMENTS better than dem TRINIDAD ARRANGERS -- that is my PLAN B.

Keith Byer better come on THE FORUM and DEFEND HIMSELF.

I don't know why these guys do not hire me as a POLITICAL CONSULTANT. A daily rate  labourer in Petrotrin gets paid $616 a day!!! I am offering my political consulting services FOR FREE!!! And nobody will hire me!!!

we will never be satisfied by anybody

so let a business person run   the show

that is we ting so the show will always continue

But wait nah, just like that KEITH BYER come and TAKE OVER THE FORUM? How come NOBODY eh CAMPAIGNING for BEVERELY RAMSEY-MOORE?

Look, since politics is known to make strange bedfellows, I better JOIN THE BEVERLEY CAMP and start CAMPAIGNING for Beverley on THIS FORUM.

RUSSIA Beverley if you are listening ... we could make this PRESIDENCY thing happen!!!

Aquil Arrindell: ALL KINDA people calling me and emailing me and VEX with ME because you put up an ANNOUNCEMENT which they are calling an ENDORSEMENT. Like people need some classes in REMEDIAL VOCABULARY CLASSES or what?

Everybody should know my position by now on the VAST POOL of HIGHLY TRAINED PROFESSIONALS in the PAN FRATERNITY who could build the WORLD GOVERNING BODY OF PAN into a WORLD CLASS CORPORATION bringing BILLIONS OF DOLLARS into TRINIDAD.

Pal, i getting all kind of calls too.

Like this shaping up to be a big show tomorrow on 90.1 FM steel pan city.

We Are Culture Crazy.

Claude, you feel Kenny Philips go give me a a wuk for all this Promo he getting. lol

If you had written your last sentence "Know Your Candidates" first -- and then introduced them one by one, with Keith Byer first -- you would have had some cover. But now everybody believes that you have a political bias.

We have to listen to the TONALITY and ATTITUDE of the CALLERS tomorrow to decide if this is the RIGHT CANDIDATE.

I may have to end up ENDORSING you for PRESIDENT if BYER get too much PRESSURE tomorrow!!!

and with all this fight for Pan Trinbago.

Executive Members still sitting in a dark office, no air conditioning, no internet or telephone and still insisting they are not moving.

I starting to feel Trinidad gone through