Ken “Professor” Philmore Remembered - The Passing of an Icon 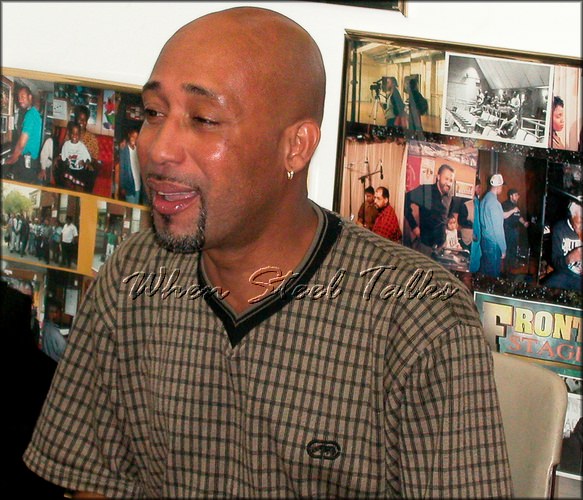 All societies have art that most reflect their people. These pieces allow you to feel a culture. It’s not the tourist view; it’s the native view. And it’s the rare, gifted artist who creates these masterpieces. Ken ”Professor” Philmore is one of those artists, and “Pan by Storm” is his culture defining piece.

In “Pan by Storm”, Professor lays his country bare. You experience Trinidad’s folk tradition, its modern conventions, its cosmopolitan sophistication and the ebbs and flows the people. Global influences are present in the music, but the Trinidadian vernacular is always front and center. Professor is saying, “we know your ting, but dis is we ting”, which is classic Trinidad. The share joy the music shows what Trinidad could be, and sometime is.

“Pan by Storm” is one the most beloved arrangements in panorama history and Ken Philmore one of the most loved panmen of all time. When Ken passed, it was like a family member died. Even if you never met Professor, his music was a part of your life; part of our identity. Ken’s musical output was far greater than “Pan by Storm”, but his legacy is tied to that masterwork, a piece inextricably linked to Trinidad’s people.

Rest in Peace my Brother.
Garvin Blake - Panist, Performing & Recording Artist
Ken “Professor” Philmore has gone too soon; it was really, really a tragic accident and everybody is in shock. He is still a young man, such an infectious personality that none of us could forget.

He was very, very passionate about his music, and - about people, and loved sharing his knowledge with anyone, particularly younger musicians, who always seemed to have an affinity with him. I know this because I worked with him several times in the U.S. and I saw that connection. I would describe him as ebullient; he was never down; it was just in his later years I saw him ‘down’ twice, very sad to see that – all of us go through ups and downs, you know? But generally, he had a very nice way.

His music was infectious. He had a flair – style and flair when he was performing, man, he was a consummate showman – that endeared him. He endeared himself to people all around the world, and he, I think, was responsible for many people, who had not come in contact with the steelpan – to get to love it. He drew a lot of people to it. So he did a lot of work for his country in promoting an instrument that he loved so much.

He had some fine compositions, you know; Pan by Storm I think was his signature piece…. Wonderful piece of music – so I mean, he’s gone now, so we wish him eternal rest.
Ray Holman - Educator, Champion Arranger, Song Writer
Condolences to the family of Ken "Professor" Philmore. It is truly a sad day for us in the steelband community and by extension for Trinidad and Tobago. What a great loss! No more massive hugs and warm greetings, whole face lighting up saying Meesh! How yuh going baby!"

You all know that this is the typical interactive behaviour of Ken. One of the warmest individuals I've ever met. He exudes passion for pan and had such hopes for its future. It's up to us to help him fulfil his dreams for the future of the art form. He advocated for togetherness and brotherly love so let's stop the bashing and get serious about taking pan positively into the future.

He has gone to make his contribution in Heaven so let's make a sterling contribution here. R.I.P. "Professor".....You will indeed be sorely missed but never forgotten.
Michelle Huggins-Watts - Arranger, Educator
I still vividly remember the first time I met Ken "Professor" Philmore as a student at Pleasantville Senior Comprehensive School in Trinidad. His charisma was immense, and, for me, it was like meeting a rock star-- I couldn't wait to get home to tell my parents about meeting this legendary figure. He was one of the initial steelpan soloists whose vocabulary I had the pleasure of absorbing, and the passion that he brought to the stage was incredibly infectious. "Professor's" sense of style and swag left a deep impression upon many a steelpan musician, especially the players who hailed from San Fernando (which is where I am originally from).

Though we lost touch over the years (I no longer live in Trinidad), my respect and admiration for Mr. Philmore never waned, and I was really happy to be able to be able to directly pay homage, a few years ago, to stalwarts like Ken "Professor "Philmore and Ray Holman at a ceremony hosted by the Trinidad and Tobago Music Literacy Trust. The magnitude of Ken Philmore's influence cannot be understated, and I, along with many of my contemporaries, will make sure that his work is never forgotten. I offer my sincerest condolences and wishes of strength to his family, friends and his multitude of admirers.

Liam Teague Presidential Research,
Scholarship and Artistry Professor Professor of Music
Head of Steelpan Studies
Director NIU Steelband
Northern Illinois University
First of all condolences to the Philmore family. Ken ‘Professor‘ Philmore was a pan person extraordinaire as a soloist and Steelband arranger. He was a true ambassador for his beloved country always with a smile and jovial stature as he played his instrument spreading the culture to the far reaches of the world.

All his accomplishments in the Steelband world his concerts showed his professionalism in representing the home where the pan was born.

Pro as he was affectionately called arranged for a number of steel orchestras in Trinidad Fonclaire and Skiffle to mention two of his biggest and also Pan Sonatas in New York He will truly be missed home and abroad.

We have lost a son a true son of Trinidad and Tobago a tremendous exponent if the art form and it is not that easy to replace him.

Martin Douglas
President, USSA
The fraternity of the Arts and Culture and panist mourns the untimely passing of the icon, the innovator and inspiration to all musical artist Ken ‘Professor’ Philmore this morning.

In his life time he was able to share his innate love for our National instrument and in so doing magnified is presence on the global stage. The wake of his passing has created a vacuum that we must now fill with his love, ingenuity, dedication to the art form and his passion.

Composer, arranger and musician par excellence, the steelpan organizations across the globe has lost an icon.

On behalf of the Members of Council, the San Fernando City Corporation and the Citizens of San Fernando we send our heartfelt prayers and condolences to his family during this time.
Junia Regrello - Mayor of San Fernando, Trinidad & Tobago
See More

We mourn and will continue to mourn, it is the way of us mortals. We mourn with Philmore's Family and with his friends.

I remember going to a Pan evening at the University of Toronto's Hart House. Not all the greats were there, but some were like Ray Holman , Elias and others but Philmore was not there and we hoped that he would be.

Like Patti La Belle we seem to keep missing out on celebrations of our local talent when they are alive, so I must exhort the powers that be to do something about this and " don't fool your fat" we long to see and hear them here, talk to Silver Stars. May be the Big 5 will hear what I am saying.

Farewell my friend, may God be with you.

Permalink Reply by ED Peters on October 5, 2018 at 8:34am
AS the entire national and international steelpan community , prepares to say farewell to Ken"Professor" Philmore, and to celebrate his life, the ONTARIO STEELPAN ASSOCIATION , on behalf of the steelband and steelpan community of Ontario and all of Canada extend our heartfelt condolences to his family and close friends; RIEP