I wanted to share what works for me... to bring my pan on stage and not be drowned out by the conventional amplified guitars and the sort.  Also, to dispel the myth that you cannot mic a pan without feedback.

I added a picture of my rig, and yes, I am wearing a Bob Marley T-shirt.  I play lots of his songs, but make no mistake I let my audiences know where pan is from. 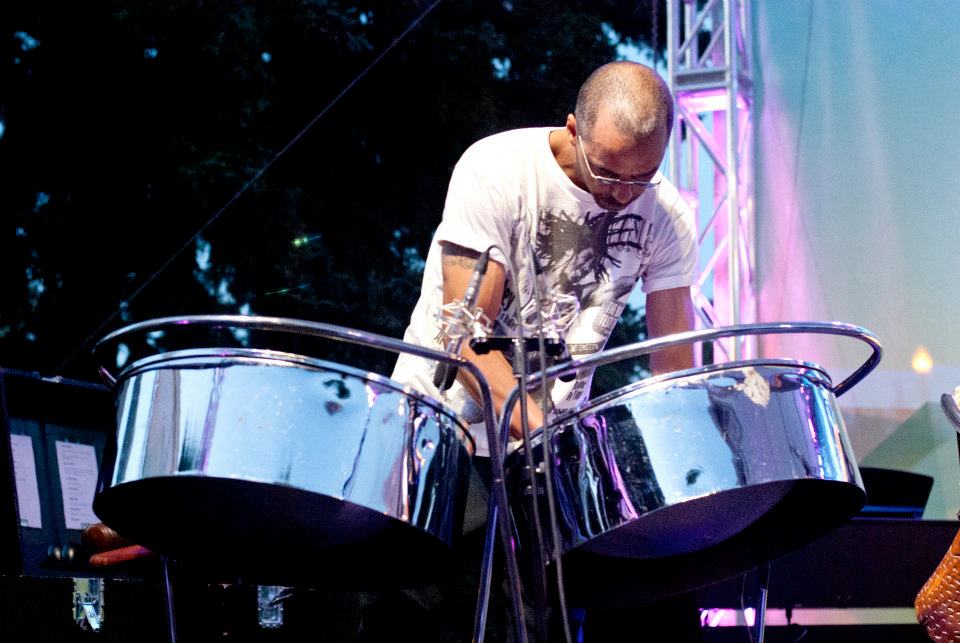 Why is feedback such an issue when micing a pan? The pan surface is highly reflective, and we are still experimenting with techniques and mic placement. If you mic a pan from below, and you are near a monitor, reflections off the pan come into the mic quite easily.  If you mic from above, you may be pointed directionally in front of a monitor or driver as well.  Also, it seems that a regular mic needs a lot of gain to get a good signal relative to the rest of the stage, but the more you add, the more unwanted sounds from around you are picked up.  And then there is a question of technique to use when you mic a double second... would one mic work?

When micing a steelband, and there is less need for stage monitors, setting up room mics in front of the band is a good way to go... less chance of feedback.  But what about on a loud conventional stage?

The mics I use are inexpensive Apex 185s (Apex is a Canadian company, so may not be available in the States or abroad), a matched set of pencil condensor mics.  They have a very narrow pickup pattern (off-axis rejection) which allows me to angle each mic towards the bowl of my pan from above, and it will pick up those vibrations from a bit of distance (instead of micing from below with the mic a half inch from the bottom of the pan), while it rejects sounds from the sides.  Feedback is negated as the mic's pickup pattern is focussed on the pan, and not in the signal path of any speakers.

I've also used them with my tenor, and am convinced this style of mic is the way to go.  If you are shopping for mics, look for something that will pick up sound from what you point the mic directly at, but will reject sounds beside the mic.  The guy that demonstrated these mics for me snapped his fingers in an orbit around the mic, and the sound was only picked up in a narrow path directly in front.  It was cool.

What do you use?

Is that for live performance?  I understand that Rode mic is beautiful to work with in the studio.  Do you get nervous when someone bumps your mic stand?  I would!

My apologies, Winston... I finally had a chance to look at the specs for the Rode NT5... they are the same type of mic as mine... matched pencil condensers.  Their quality is far superior to mine.  Your experience with them must resemble my experience.

I took the liberty to search for similar mics...

At a glance, they look like they start in price at around $80 USD per mic, whether sold individually or in a matched pair.  Not bad.  They really get up there in price though.  The standard Shure SM57 (every sound engineer's Swiss Army Knife of microphones) is typically a little more, and not as well suited for our front-line pans  (they may be better for mid or low-range).

COREY, I HAVE 2 STICK-ON MICS ON MY DOUBLE TENOR, BUT I DONT USE THEM, IT HAS AN AFTER TONE SOUND, I DO NOT KNOW ANYTHING BOUT ELECTRONICS/ AMPLIFYING SO I LEAVE THAT ALONE.

Interesting.  I bet Brian could identify what you have.

Yeah ... those are contact pickups of which there are many suppliers. Arguably the best is by Barcus-Berry. We used to make our own (used in Joylanders in 94 and 95). The "after tone" Bede is referring to is what I discussed elsewhere in this thread. Sometimes it could be eliminated by trial and error with positioning ... most times they work best on the skirt just under the rim.

In my case with the contact pickups, I do have them on the skirt just under the rim, will it sound better going into two Amps instead of using a Y connector going into one amp? (CRATE CR-112 amp),

I used to Y the ones I used, although it is best to feed them into an individual mixer channel and blend them. Many times they worked best by placing them in line with either of the grooves of the smallest note ..this way the pickup  is not as sensitive to notes that are closest to it. For symmetrical pans like the tenor, I sometimes got good responses by placing the pickup in the middle of the pan ...  but you could get the impact of the stick dominating the sound.

As I said, its trial and error. I am at the point now where I use pickups (contact or otherwise) only with the low end instruments.

See Sweetwater's brief on matched pairs. They suggest that these days they are not exactly necessary. However, if they work for you (I see that you play a double second), you should stick with them as a sort of guarantee that they do indeed have similar characteristics.

If you check the mic specs for the ones you listed, you will see that the AKG has the highest max SPL of 155dB. I propose that the max SPL is a  critical factor in selecting mics for pan. Because of its percussive nature, a lot goes on in the first few milliseconds after stick impact. A mic has to be fast and must have high SPL capability to capture these initial transients without distortion. The electronics it feeds to should be just as capable. The AKG has a higher limit than the supposed king of condenser mics by DPA (at nearly 2 grand!).

I am just now seeing your reply here and reading your feedback.  Matched pairs... it makes sense.  I think if you are capturing a stereo image of one sound source, that could be important.  I never even considered that my patched pair could drift apart over time though!  Excellent feedback on max SPL.  I suppose that may be a reason why sound engineers are leery in a live setting.  So far, I've been lucky that they have tolerated what I've thrown at them.

Corey, my friend, how are you doing? In the middle of all this: WE NEED PAN MUSIC!!!

MAINSTREAM PAN MUSIC!!! All the technology and the science doh mean nothing without MAINSTREAM MUSIC!!!

Give a man an E-Pan and a PHI and INDIGISOUNDS and if the man does not have the musical skills (The Andy Narell skills) all that TECHNOLOGY means NADA!!!

I'm good Claude.  I posted a video in Keishaun's topic of a song he recorded with a friend.  It features vocals, but Keishaun's work on the track is vital to the song.

With this topic, the importance is getting pan on level ground with singers and players whose instruments are easily recorded or performed.  Without a microphone, my pan gets drowned out by the guitars and thing.  We are learning to bridge that gap to get into the mainstream.

I listen to Keishaun and Duvonne, and they have some nice licks they play.  But really, there are no mainstream pannists.  Narell, Greenidge, Filmore et al have fame here, but not out there.  This conversation will hopefully help someone get on big stages, or maybe improve the production of steelbands to a comparable level that the average person is accustomed to listening to in other styles of music.  It is a step in allowing pan to cross over into a similar acclaim and demand as other instruments… to show that it deserves the same stage.

Maybe there are players that are reading posts and improving how they record pan, and making better productions for us to enjoy right now just from reading this topic.