Minister of the Arts and Multiculturalism Dr Lincoln Douglas has challenged the executive of Pan Trinbago to prove to the world that their organisation is “The World Governing Body for Pan”.

The challenge came on Wednesday evening at the Lord Kitchener Auditorium, National Academy for the Performing Arts (NAPA) at the launch of the logo for the International Conference and Panorama 2015. Pan Trinbago proposes to hold the first International Conference and Panorama (ICP) in 2015, from August 6 to 9. University of the West Indies, St Augustine (UWI) pro vice chancellor and principal Prof Clement Sankat is the Patron of the ICP. The conference will deal with topics such as The History and Development of Pan, The Science of the Instrument and the Applications used, Recent Developments of the Instrument.

I'm like you I'm questioning the statement published on Pan Trinbago web site, maybe PT will respond to our concerns and clarify with was posted on their site, the word Panorama may have a different meaning to Pan fans in different countries. They are the World Governing Body for Steelband.

Official Logo for the International Conference and Panorama 2015

"The National Musical Instrument of the Republic of Trinidad and Tobago, conceived through the imagination and innovation of an extraordinary people - the steel pan - forms the core of the illustration, unquestionably highlighting the focal theme of the occasion.

The internal ring denotes the unique musical impressions which emanate from the instrument to intimately connect with those who hear it, while the peripheral band signifies the outstretched arms of the people of Trinidad and Tobago, unified to safeguard and elevate this invaluable cultural treasure.

The chromed tones of the steel pan showcase its natural splendor, the scarlet depiction of the melodic waves are indicative of our national hue, and the lifeblood pigment of the people highlights the impartiality of our coming together.

Much like the distinct notes of a pan we are all unique - every individual; every nation, but through the orchestrated integration of each individual's influence a masterpiece can be discovered!

With this in mind, the Trinidad and Tobago international conference and panorama is being hosted as a pioneering effort for global outreach to internationalize the steel pan industry."

Without further ado i invite the president of the republic, His Excellency Anthony Thomas Aquinas Carmona and Mr. Keith Diaz, President of Pan Trinbago to perform the official unveiling of the ICP logo. 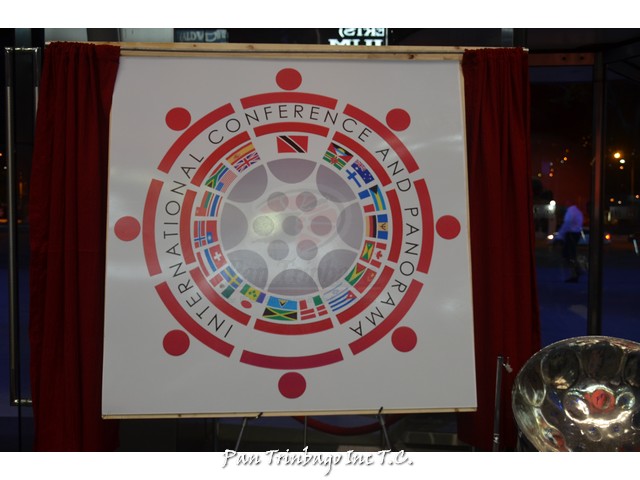 I have a problem with President of the Republic of T&T and the Minister of Multiculturalism for supporting a group the has no mandate to rule.

The challenge from the Minister should have been to call an election.

I believe there are other dynamics taking place here, the president functions on the advice of the PM and her government, the minister is a member of the ruling government. Don’t take his performance at this event seriously he knows he’s in the spot-light. The man speaks from both side of his mouth. Remember before the semis-finals, he was all in support of Diaz and his Panorama initiatives. This is "eat ah food" talking.

You will think that PanTrinbago will have the rules and regulations already in place for this major event or made contact with the foreign bands, their organizations or posted the requirements for registering their bands on their website. They could have used the opportunity at this launch to provide the names of individuals who are invited to give presentations.

Permalink Reply by VALENTINE YOUNG on March 29, 2014 at 12:08pm
Cecil My Bro. We all want thé Best for Our Country and our Pan Culture. But it's hard to believe that Pantrinbago with its Track Record of Corrupion and Mismanagement could ever Host an International event like the World Steel band Panorama. It's just Wishful thinking. Don't take them too Seriously. They only trying to fool People. Question. Could you imagine how much money something like that would Cost and Pantrinbago always crying Broke?

It is sad to see how the president of Pan Trinbago could manipulate the Minister, the PM and the President of the country.

Somebody in the Mecca should have prevented the PM and President from getting involve with this group until the court matter is resolved and election held. No one vote them in, their mandate was up two years ago.

Real power comes from the people, but the people don't believe in their power...in this age of technology and media manipulation any one can sell you an image, its the back story that counts.

Most people fall for the images, that's why advertising is a Billion dollar industry.

Permalink Reply by VALENTINE YOUNG on March 29, 2014 at 1:03pm
Cecil. Our People are Gluttons that's the reason that they accept Mediocracy. We never challenge the people our things that rule us. Everything Must be Status Quo. Like Sparrow once said. "We like it So" All the Steel bands in T&T are scared off Pantrinbago, they always want to be in good graces with them. That's the reason they never Challenge their leaders. From Arnim Smith - Patrick Arnold and Now Keith Diaz tell me what have they done for the Pan and Pan People besides Staging Panorama.

Permalink Reply by VALENTINE YOUNG on March 29, 2014 at 1:21pm
Cecil. I am in Total Agreement with you, but who is going to carry the Message. Those who are most affected are sitting on their Donkeys hoping that things will change by itself.

One of the most vocal opponents of  PT leadership and its administration has been silenced, we need another influential voice to challenge the establishment.

It is a month since this year’s Carnival weekend yet still excitement continues in the steelband world. Pan Trinbago has a lot of events planned for the remainder of this year and 2015, with the most ambitious being the staging of the first-ever international Panorama contest next year.

The intent of the ICP, tentatively scheduled for August 15, is to establish T&T as the mecca of pan and Panorama.

The central image of the logo is a steelpan, surrounded by the flags of countries to be invited. Among the expected invitees are bands from the USA, UK, Canada, Nigeria, Israel, Australia and every pan-playing nation of the Caribbean.

Some of the rules of the competition are that just one arranger will be permitted per band, and no musician can play for two bands. Bands will also be limited to 60 players.