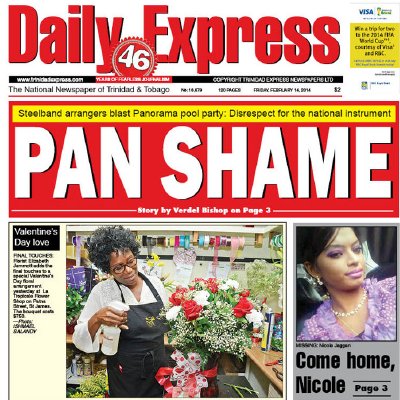 Trinidad & Tobago, W.I. - Pan Splash, a new feature added to The Greens by Pan Trinbago for Sunday’s Panorama semi-finals, has been criticised by members of the pan fraternity as a blow and a blatant disrespect to the national instrument and the Panorama competition.
Steelband arrangers yesterday spoke out against the introduction of the pool party at the pan semis to be held at the Queen’s Park Savannah, Port of Spain, this weekend.

Arranger for defending Panorama champions Petrotrin Phase II Pan Groove, Len “Boogsie” Sharpe, said Pan Trinbago should be ashamed. “This is our national instrument and a national competition and you want to keep a pool party? This has nothing to do with the steelpan. Panorama is our biggest time of the year. This pool party will take people away from the Panorama. It should be kept on a separate day and kept away from Panorama. A pan man who really loves pan and really respects you wouldn’t stand for that. All pan men should not stand for this. This is disrespect to all of us,” Boogsie said.

....Arranger Pelham Goddard also spoke against the pool party. “That is a big distraction from the main event. This is Panorama and it should have Panorama alone. They should be thinking to promote Panorama and if they have to depend on another event to prosper or to boost Panorama that is bad, that is very bad. Every year they are coming with something ridiculous. That event would not attract anyone interested in Panorama,” Goddard said.
read entire article

WST forum with all this rattling going on now about this POOL PARTY - Salah Wilson two years ago try in vain with NO SUPPORT FROM TT PANMEN/WOMEN about getting themselves ORGANIZED for incidents like this POOL PARTY FIASCO - I HOPE George (Ghost) with the Town Hall meeting FEARED much better - I WAIT WITH BATED BREATH on March 7th at Starlift Pan Theater to see a paradigm shift in the Steelband movement, it is NOW or NEVER.....

Gavin: this depends on the support he gets from the people at ground zero, the locals have to want change because they will have to take the battle to the powers that be, after carnival 90% of the players disappear as the steelband is put-away like Christmas tree decorations until next year.

In response to a very good and insightful post by Barbara yesterday, ...

This is a farce as we say "Just ole talk" and I mean it in the literal sense. My friend Hameed Shaqq has put up a post which indicates the  Former PM Manning made the statement in Parliament that Pan is the National instrument ...but it WAS NEVER RATIFIED...NEVER ENACTED INTO LAW .... That’s why it is "Just ole talk" and you are 100% right about all of your post. Because it is NOT the NATIONAL instrument of T&T...it is treated the way it is being treated... check the post from John Henry about the ABSOLUT PAN ad near the Jean Pierre Complex.

My take is that we need more than lip service of saying this is our National instrument.

Ms Barbara to address your sincere concerns .... "There is little radio airplay, CDs are hardly recorded, events throughout the year are poorly attended. fewer steelbands are touring.  Where are the Pan In Schools programs going?  Are students lining up for university/college courses and degrees in pan tuning, pan education, pan performance, pan arranging, steelband management, steelband marketing?  Where are the jobs in pan?"

My suggestion is "We Need a Ministry exclusively for the Steelpan in T&T".... nothing else will suffice

Maybe we don't believe that this is possible ..but in reality it is quite possible and it is needed ...If you can come to the Town Hall Meeting at Starlift ...we will be making a presentation on this topic. This preliminary document that I would like to present on this topic will be a fully researched project in my studies. But I will be presenting the outline of this and hope to be there to defend it...because I strongly believe that this is where we have to go with the Pan and we have to go there ASAP.

I am stating here unequivocally that if there is no movement towards this motion by the time that I would have completed my studies, I am prepared to go into Politics in T&T to address this and other relative issues.

Incidentally I had presented a similar document to "The Gypsy" while he held the office Arts & Multiculturalism Ministry......

With all respect to "The Gypsy" .. I only received a reply from him after he no longer held that office. He said it was a good document and wished me the best.

In summation I do not believe that the present government or opposition has the testicular fortitude to move in this direction...so this has to start from the grassroots perspective and the town hall meeting is an ideal launch of this movement. ....Regards