PanTrinbago is on fire and is burning down quickly.

PanTrinbago is on fire and is burning down quickly.
It is clear that the signals were observed over the years. When former president Patrick Arnold started implementing measures to attempt at clearing junk by introducing measures toward fiscal order at Head Quarters the permanent Secretary - Rich Photo according to Arnold, hatched a devious and dangerous plot to ensure his removal from office.
In the 2009 Election Patrick lost the Presidency. He was betrayed by those whom he gave his life for. Who would have believed that the Photo would have betrayed Patrick. They were like Mutt and Jeff - inseparable. Patrick's Strategic Development Plan would have made major changes at headquarters and the photo was not having that, so it was out with Patrick in with Diaz.
A new day had dawned or so we all thought. A few new faces with some incumbents formed executive 2009. I Beverley Ramsey Moore was the assistant Secretary. With my governmental experience I was fascinated with the phrase "World Governing Body" and therefore thought it appropriate to begin advocating for the setting up of the steelband Government and its various departments with the systems for financial controll and good governance. I can clearly remember the Photo and others saying that I was not in the Tobago House of Assembly where I served. In other words the message that was conveyed is that the culture of Pantrinbago was about recklessness and no one was going to change that. I clamoured for financial rules, the setting up is standing committees but I was seen as an obstructionist. Am I surprise at what is happening now? No not at all. Every day bucket going to the well one day bucket bottom will drop out. Pantrinbago's buttom in the road.
The building is now engulfed with red hot fire and thick smoke. The Photo, the Shepherd rod, el Pablo and others blaming the President Diazz for igniting the building.
The upholders are worse than the thief. In this case Diazz pelt the matches but Photo and all the others gas the building, including the former VP. While Diaz is a runaway horse who needed to be bridled from the very beginning they egged him on for eight years. I warned them that they were creating a Monster off of which we will not be able to dismount. When I could not take it any more I resigned.
My final words to them were "I can no longer be a part of waste, mismanagement, indiscipline and a lack of transparency and accountability,which I was sure would lead to the collapse of this organization and all this Tobago girl have is my good name. I want no part, so I Gone". I resigned the following day.
After that I was battered and abused with words when ever I made contributions at meetings but that did not deter me for I am a warrior I am a fighter, I stand for righteousness. No man "nah" hinder me.
Now, that they are blaming each other for destroying our beloved Pantrinbago. I hold no brief for Diazz but he is what he is today because Photo, Serretted and the others created him now they want to annihilate him. They are to be blamed for who Diazz is today. Imagine Pablo calling Diazzz a rogue! Pablo you said Diazz is the best president. Well boy the money done so friendship mashup. What a thing!
Despite the ashes and the red hot coals we can still salvage our dignity.It is our business as member bands to step in and take back that which they stole from us - our Organization. The majority of bands have been too quiet. The time is now to take action against those who have raped bands without bands knowing it.
The organization has been deemed insolvent by our auditors but we will over come. Tomorrow is another day and our human resource is our greatest asset. We must never be afraid to venture into the unknown because all things are possible.
Bands it is time to Stand
And be counted.

So it look like if FORTEAU does cut everybody throat to STAY IN POWER!!!

Permalink Reply by Ainsworth Mohammed on April 12, 2018 at 10:40pm
High time for the whole bunch of them to go!
They have damaged the image and brand to a point where it may be difficult to restore within the medium term.

We all condoned the foolishness and mismanagement and lack of accountability from the 10% crew whether it was the Patrick or the Keith administrations! ( it is coincidence that 2 of our past PMs were also Patrick and Keith)

Also ALL past government administrations turned a blind eye to the lack of financial management in the hope that that would buy them votes.That too is wrong in that Pan Trinbago executive has NO influence over its membership national voting patterns.

We must do whatever is needed to remove the present executive and bring in fresh new younger blood perhaps with an Advisory Council ( pro bono) who has a genuine interest in the further development of the Steelpan Industry!

The Steelpan Industry MUST also be part of Government’s Diversification Thrust!

No past Government has understood the power which is yet to be unleashed!

Thank you Mr. Mohamed. We always welcome a fresh point of view on the forum.

You cannot serve two masters. The Big Five Steelbands OR Put you hat in the ring and present yourself

for President of the Association.

If there is no conflict of interest....

for instance, if i form a group in the movement for steel pan educators and i hold a position, do i need to resign to hold office.

i am captain of San City and stayed captain whilst serving at central executive, which to me is a more conflict of interest that the BIG5....... 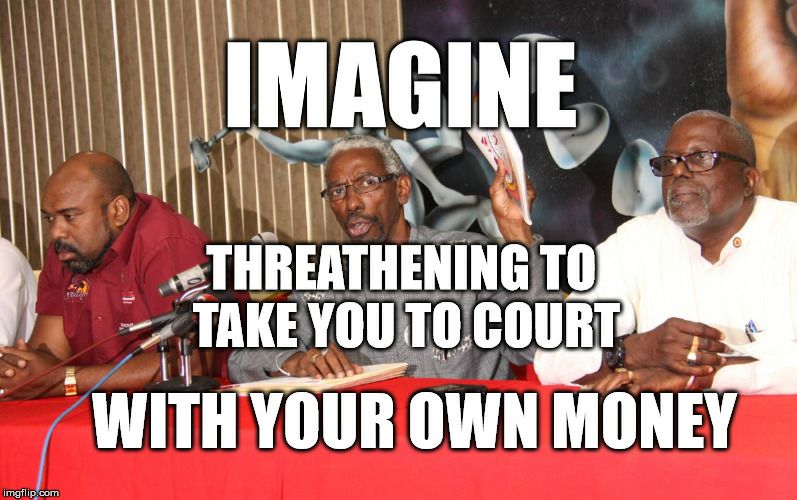 Ainsworth.. Ungratefulness is worst than witchcraft!

The following is a comment I made verbatim, in response to the discussion "FRONT PAGE NEWS from our reporter (on the ground) GREGORY LINDSDAY!!!", raised by Claude Gonzales, I would like to share it in response to this discussion also, as I believe that its content may not be irrelevant.

"So will you be promoting "Ah We Gyul" sir?

The disingenuousness evident on all sides in this "Comess" is nauseating.

Do you suppose sir that The Chairman, The Press Secretary, and other CIP signatories may now be scrambling to cling on to prospective presidential nominees of their liking, not by consensual nomination, but as a matter of personal opinion and choice, based on who they suspect, or are encouraged to believe will give them the best individual attention and/or deal during their tenure in office, while other CIP jefes may be stealthily positioning themselves in the assault to ambush the charge, with the intent to occupy the most commanding  and strategic positions?

I foresee continuity, continuity of the bacchanal and confusion that exists at present, I see "The Same Kaki Pants", I see a recipe for further fragmentation and increased dissent in the fraternity, as I don't see any suggestions for meaningful change being presented for public scrutiny by the protagonists as is the trend in any movement intent on change and reform."

I see "The Same Kaki Pants"

Permalink Reply by Ainsworth Mohammed on April 13, 2018 at 12:16am
Just to make my position abundantly clear:

In response to Orvis Noel’s statement about “you cannot serve two masters”etc I HAVE NO AMBITIONS FOR THE PRESIDENCY OF PAN TRINBAGO.

As a matter of fact,if I may,I would caution all such “aspirants” to think this through carefully before throwing your hats in THAT ring since one has to consider how to liquidate the mountain of debts as detailed on the QUALIFIED AUDITED ACCOUNTS.Please also keep in mind there may be other debts,direct or contingent,which are not reflected on the QUALIFIED AUDITED ACCOUNTS.Please also bear in mind that Audited Accounts are usually accompanied by Auditors’ Notes which have not been made public.

The aforementioned must not be viewed as a deterrent to those who aspire to the Executive but merely to forewarn aspirants that this is not a job for the faint hearted nor for unqualified individuals without business acumen and experience.

Rolly Polly and D'Photo are bad characters who have been acting up in public for years. In fact Pan Trinbago has exhibiting gangsta behavior and traits for sometime now. So what is different now? And what will change going forward?

Mr. Mohammed do you believe that given the way Pan Trinbago is currently setup it can meet the challenges necessary to move Pan in Trinidad and Tobago forward.

I do not consider that it is a matter of “ how PT is set up” but rather the quality of personnel in the executive.We certainly need an Executive Panel with a HUGE Vision for the Instrument ,the musicians and the music.This ‘vision” must not be restricted to T&T nor just regionally but to WORLD.

We do have members with those qualities distributed within the bands. In order to form a national steelband, we look for the best players in the various bands, Why can't we look for the Best leaders from within the bands, create a pool people who have distinguished themselves with Fit and Proper Characteristics, distinguishing themselves with HONESTY and INTEGRITY!  We must stop looking at names because they are popular, but look for people who have shown great administrative and leadership skills within the bands.