St. Joseph, Trinidad & Tobago, W.I. - A disappointingly poor production coupled with the embarrassingly small audience in attendance devalued the laudable concept of paying homage to female members of the steelband fraternity at Panwomen Is Boss, an all-female Pan Jazz concert, staged at the La Joya Auditorium in St Joseph, on July 28.

....Scheduled to begin at 6 pm, the programme got underway one hour later, before an audience of just over fifty patrons, prompting show host CG (Derek Silman) to ask, rhetorically, “why is it everything to do with culture always have a lot of problems?”
read more

This show was poorly market, Ajamu did not make use of WST, facebook and others social media to market the show, facebook have over 15 Group Steelpan site, never once I saw any plug for the show WST have an events section, did not use, when having a pan events use WST to get expert volunteers help!!!!!

My dear Mr. Smith: I did submit the Panwomen is Boss Concert information to WST but  instead of listing it in "Events" as I expected, they did a "News" story which you apparently missed:  (http://www.panonthenet.com/news/2013/jul/all-female-panjazz-concert...) . Further, the event was, in my view, well advertised: It was on facebook (thanks to Natasha and Ayana), in all the major newspapers in Trinidad (Express, Guardian, Newsday); it ran on Synergy TV from June 28 to July 28, I was live on Synergy TV on July 25. It also ran on ViBE CT 105 FM three times per day, from July 19 to July 28. I was also live on VIBE CT 105 on the "Mixed Nuts" morning show  with Errol Fabien and George Gonzales.

It was also advertised at my lecture on "The Steelband Movement in T&T: A History of Violence" to the Philosophical Society of T&T at Studio 66, in Barataria on July 12. The audience there was small. I estimate about 20-25.

Additionally, I did a "never before seen in T'dad" advertising: For several days during July, I set up three 2ft x 3 ft self-standing signs (one of them an "A-frame") about 25 yards apart, at strategic locations (for example Morvant Junction and Curepe Junction - two major intersections where there is "massive" pedestrian and vehicular traffic) during the rush hour traffic--7-900 a.m. and 3-6:00 p.m. And I walked the beat (sometimes assisted by brothers from my hood), distributing flyers to pedestrians and those in cars crawling in the traffic whose attention was captured by the signs. (Sorry you missed us!)

I visited several panyards: All Stars, Renegades, Phase II, Starlift, Playboyz, Harmonites, Pamberi, and Scherzando. We distributed flyers at the We Beat (steelband concert and at the Parade), at Teddy Belgrave's funeral (discretely, not to desecrate the memory of a real soldier for pan). Interestingly, within close proximities to Keith Diaz and Bryon Serrette, the conversation between some pannists including LaPierre, Jr. and a pannist from Pamberi who I had seen before, went in the direction of Pan Trinbago's lack of support for pannists, I made my exit.

I also advertised the show in Tobago (because on of the pannists initiially scheduled to perform, Anthea Balfour, is from Tobago): I passed out flyers on the Ferry, I was live on Radio Tambrin, I set up my signs and distributed flyers at at several locations in Scarborough, including the Food Fair  in APT James Park, at Crownpoint Airport and at several steelbands, including Dixieland, Steel Xplosion, Katzenjammers, Bucconeers, Hope Pan Groovers and East Side.

I was scheduled for David Mohammed's show on WACK 90.1 for July 25, but the Emancipation Support Committee "bought" the entire show to advertise their events (including the steelband show last Tuesday which had a rather small audience, with the exception of pannists who performed with the steelbands and their few supporters.)  He gave me the option of calling in during the show but unfortunately my appearance at Synergy TV was scheduled for 8:00 p.m. but I was last on the didn't get on until close to 9:00 p.m.

In closing, I put up a poster and left flyers at Pan Trinbago's office and also I sought their endorsement of the show (verbally and in a letter to the executive as directed by Bryon Serrette), and did not get it.  I also asked Diaz to his face to be on his radio show (and also sent him an email to that effect) but never got a response.

I could but would not make excuses for the poor production; however, at this juncture, I surmise that the poor attendance at the show had more to do with the steelband culture in T&T promoted especially by Pan Trinbago (Pan in the Countryside) and at festivals like Borough Day and the Laventille Steelband Festival: a culture of freeness and big steelbands as opposed to paid events and performances of soloists or small-sized ensembles.

But there is much more. two out of every three persons to whom I attempted to give a flyer advertising the concert said they did not like pan. One young lady went as far as to say that if she were the Prime Minister she would ban pan in T&T because it is too noisy.

I just completed six months in T&T and it was the culture shock of my life, so stay tuned.  I will have a lot more to say in time. To paraphrase Fidel Castro: "History is the best absolver"

"I could but would not make excuses for the poor production; however, at this juncture, I surmise that the poor attendance at the show had more to do with the steelband culture in T&T promoted especially by Pan Trinbago (Pan in the Countryside) and at festivals like Borough Day and the Laventille Steelband Festival: a culture of freeness and big steelbands as opposed to paid events and performances of soloists or small-sized ensembles."

Without festivals like Borough Day, Laventille Steelpan Festival and Pan In The Countryside what is there for the big steelband?

The real issue here is not about turnout and support or promotion for big steelbands, but what he states has to do with support for "the paid events and performances of soloists or small-sized ensembles."

The fact that Dr. Ajamu is well known in the Atlanta steel band community for his work and promotion of our art-form, I suspect Pan Trinbago may have had some concerns about supporting this event,  an endorsement from PT would have made a difference.

In the freeco culture somebody or organization making money.

I feel what Dr Ajamu experience was due to the fact that he don't reside in T&T, as stupid as may sound, there is a tendency to give the cold shoulder to non residents, we have to also acknowledge that there is an attitude problem with most Trini pan people, they  don't see the big picture, I am beginning to think that you cannot live in a small country and think big.

What the doctor tried to do was awesome, lately I am seeing a lot of highly skilled women players from every where, giving them a platform the display their skills seem like the right thing to do.  I hope that Dr Ajamu don't give up, what he ran in to is the reason why people like himself stay away from the steelband, too much insecurity and negative vibes from pan people. 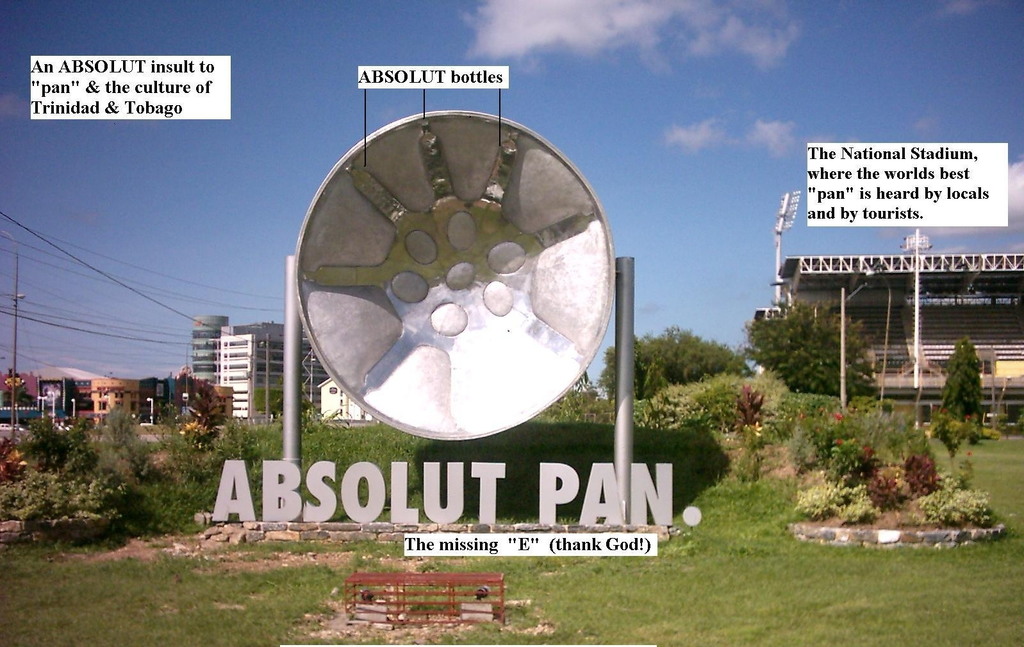 I am not at all surprised at Dr. Ajuma's observations! Look at how we allow our national instrument to be treated! Pan and our culture is publicly insulted by a foreign product and not a single panman of government official has raised a finger to remove this disgusting commercial monument!

Dear Dr Nyomba, whereas what you have said may sound politically correct I'm afraid you have drawn the wrong conclusions and is therefore likely to repeat your foozle in the future. Concerts featuring solo artist and small ensembles have been successfully held in T&T in the past. For what its worth here's what I think. One of the fundamental principles in promoting a good show is to have a headline act - you had none. Don't get me wrong; I'm not casting aspersions on your cast - Natasha Joseph for example is an excellent pan musician; the fact remains however she has not yet attained diva status and therefore does not have a following. Had you included a Len Boogsie Sharpe or a Robbie Greenidge, for example, the outcome may have been far different. You played the gender card and unfortunately that is not yet a selling card for steelband concerts in Trinidad. And that brings me to another fundamental principle i.e. knowing you targeted audience. In spite of the fact that many young people (in particular young women) do play pan today, the demographics of steelband audiences in Trinidad is still 40+ and predominantly male. If your advertising campaign carries the wrong theme, no matter how expensive, it will not produce the desired result. An ad campaign to market gramaxzone as an aphrodisiac, no matter how lavish, will only attract a few desperate takers (and I'm using this just as an analogy not that I'm calling your show poisonous). There are several other fundamental principles of promoting a good show that you overlooked (e.g. timing, location and the fact that you have no track record in T&T as a producer of good steelband shows - so people would be sceptical).  I believe I have made my point so I'll say no more except to point out that Pantrinbago is the least of your problems. And I'm not here trying to defend the executive of Pantrinbago but saying to all of us members that Pantrinbago is us not just the executive committee and until we decide exactly what type of organization we want Pantrinbago to be, the organization will keep going around in circles. No organization can be police, prosecutor, judge, jury and executioner at the same time. NUFF RESPECT

...better next time because they will take the comments into consideration and ask for help!  Or, will I continue to see the question "If pan was in Jamaica would it...."!    Study the development of reggae/ska/rock steady.  Also study rhythm & blues (R&B)/rock & roll/Soul/Rap!  No need to re-invent the wheel.  We do know, though, a fact that is reported here:   One hour wait to start concert....!   Lateness leads to disappointment and it turns off the must enthusiastic of audiences!  Lateness is/was and will always be the DEATH OF LIVE PERFORMANCE in any musical style in any era!

Permalink Reply by Annette Agarrat-Beckles on August 7, 2013 at 2:17am

"two out of every three persons to whom I attempted to give a flyer advertising the concert said they did not like pan. One young lady went as far as to say that if she were the Prime Minister she would ban pan in T&T because it is too noisy."

I have always said myself (much to the chagrin of my pan loving friends) that once you put more than three pan together you have N-O-I-S-E!!! I am both shocked and fortified to see other HARDCORE Trinidadians supporting my point of view on the pan. Now, don't get me wrong, there are times when I could enjoy the N-O-I-S-E, it being a cultural inculcation.