June 22, 2019
republished with expressed permission of the writer Andre Moses

Circa 1989, I taught Principles of Accounts at St. Augustine Secondary. Salmon Cupid was a student in one of my classes. The school steelband had just won the Steelband Music Festival competition and included in the prize was a supposed trip to the Aberdeen Youth Festival in Scotland, courtesy the Ministry of Education. But the 1990 coup intervened, and the natural order of things was upended.

By happenstance, I discovered that there was an invitation from Jeunessess Musicales de France, lying somewhere on a desk in the Ministry of Culture and I decided to pursue it. That pursuit is a story in itself, but that is for another time. The end result was that in November 1990 our school steelband embarked on a two-month-26 city tour of France. 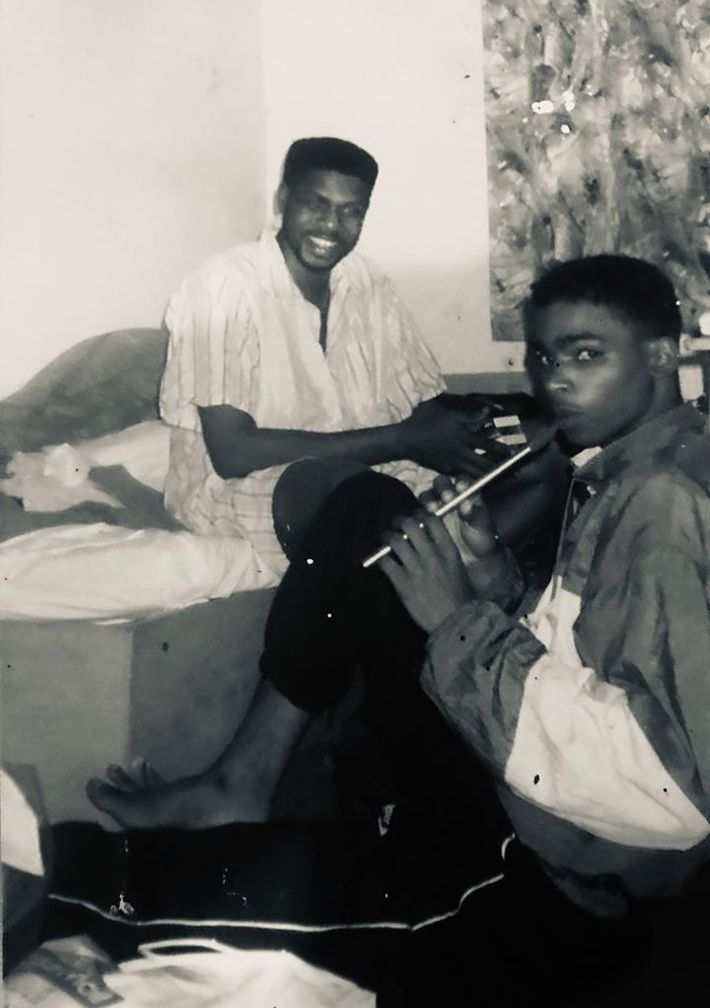 But I digress, back to the student Salmon Cupid. My memory might be a bit fuzzy; 30 years has a way of doing that, but I remember engaging him in a conversation near the school cafeteria. He knew I was the teacher in charge of the school steelband, and I recall telling him that we needed some additional personnel for the rhythm section. He was a precocious youngster and he offered his services with his own “glowing” self-recommendation. Given the limits of his stated practical credentials, I was skeptical, but I invited him to try out. In those days our school steelband had a dynamic engine room but “small man” was WorkshopEdenot one to let his lack of experience inhibit him, and in November he was a member of the 35 strong party heading to France. That 1990 tour to France was followed by another in May 1991 and a tour to Scotland in July-August 1992.

One day in the run up to the Scotland tour, Salmon came to me with a business idea. He wanted to make miniature grape-fruit tin steelpan souvenirs to sell on the tour. I told him that would be okay and therefore whilst the rest of us had packed our bags with uniforms, clothes and the like, Salmon or Cupid as he was called, had a special suitcase packed with hand-made steelpan souvenirs. During that tour, at almost every performance, we discovered there would be a souvenir exchange as part of the formalities, a circumstance for which we were ill prepared, so we offered to buy Salmon’s miniature pans from him and perhaps somewhere on a office shelf in Scotland, one of those miniature pans might still remain as a reminder of pulsating steelband rhythms and Salmon’s budding entrepreneurial spirit. Please allow me two more anecdotes to paint this character portrait. While on tour in Scotland a Gaelic lady who has a part of the janitorial staff at the hostel where we were staying was very upset and hyperventilating. I intervened to discover if our group was the cause of her discomfort, because I saw Salmon in the thick of things. Between sobs and making some accommodation for the communication hurdles occasioned by our thick accents, I discovered the following. The boys wanted to play table tennis. The lady wanted to clean the area. Salmon took her broom and said to her, “Moms relax yourself “ and he proceeded to sweep out the room. 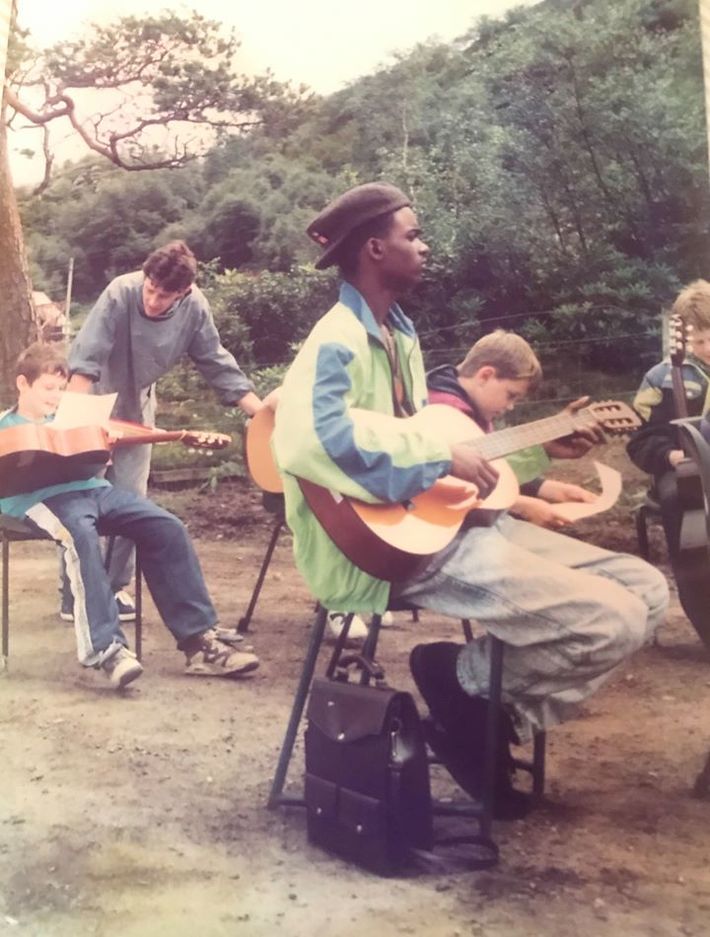 The cleaning lady told me that in the eyes of most hotel guests, cleaners were invisible and might not even merit the time of day, but here was this young musician inviting her to sit and relax, while he commandeered her broom, the strangeness and the humanity of it was too much for her and her emotions came pouring out.

At the end of the Scottish tour the St Augustine Secondary Steelband was scheduled to perform at a Gala at Eden Court Theatre. The producer wanted the band to close off the first half of the program, but logistical considerations, having to do with getting the band on stage in the allotted time frame, was an issue. Salmon came to me and said he had an idea at the dress rehearsals. I enquired what was it, and he would only say, “Don’t worry Mr. Moses”. Come performance time, back-stage there were these small platforms on wheels with all the bass pans mounted on them. Salmon had gotten the theatre’s workshop craftsmen to improvise and solve the mobility problem by just using his initiative and the persuasiveness of his personality.

Some 30 years removed from those formative experiences, Salmon Cupid is now well known as the E-Pan man and the musical director of the Toronto All Stars. After leaving school he was employed in the hospitality industry and had the opportunity to travel to Canada. It did not matter to him that the steelpan instrument was a novelty in the school system in Toronto, neither did it matter to him that his background was not in electronics and computer science, just as it did not matter to him that he was not really a top line percussionist that day near the school cafeteria. What mattered was that he saw an opening and he was confident in his ability to fill that opening on each of those occasions. So today the Electronic Pan is becoming increasingly used as a solo instrument and an arranging tool and the Toronto All Stars have been touching and captivating audiences in Canada and internationally with their energetic percussive style.

In 1991, on St. Augustine’s 2ndtour to France, the school steelband was a part of a street parade led my Tan Tan and Saga Boy in which the band was mounted on an open carriage pulled by an old train engine. Looking at the visuals of the mammoth crowds lining the streets of Toronto for the Raptors victory parade, I was and was reminded of 1991, but of course the context is so vastly different. 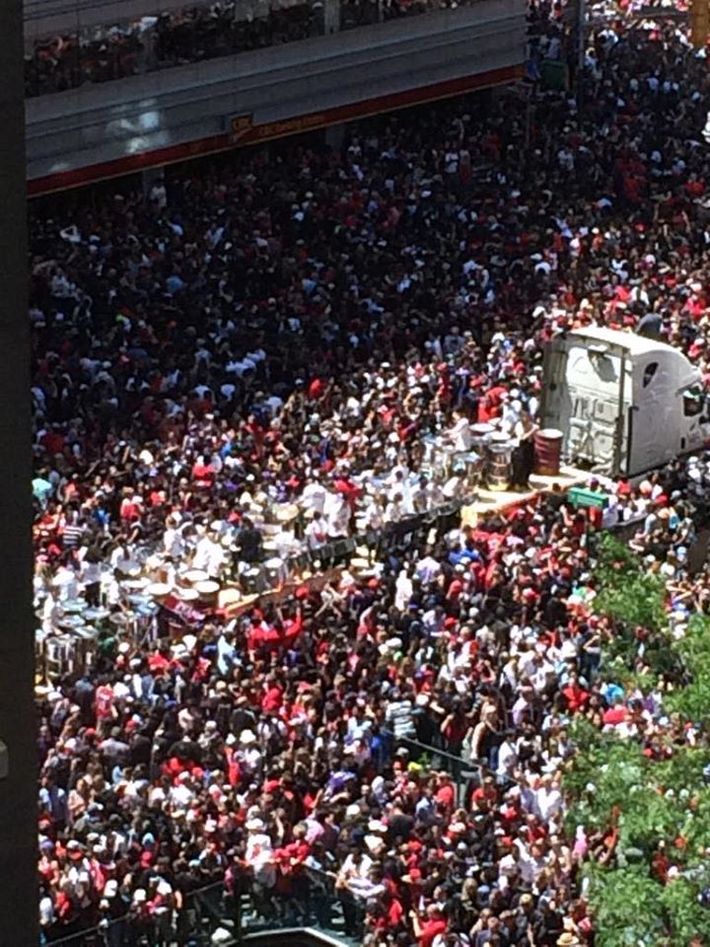 The victory of the Toronto Raptors was a victory for the whole of Canada. That victory was long in coming, the Raptors journey having started a mere four years after the afore-mentioned street parade in France in 1991. Seeing the steelband finding pride of place in a Canadian national celebration is a testimony not only to the creativity and the indefectible spirit of Salmon Cupid, but also an affirmation of where a commitment to standards of excellence can lead us and very importantly a preview of the allure and attraction of the percussive steelpan instrument in its natural , participatory street habitat.

The beauty about teaching and dare I say one of its greatest rewards, is seeing how a story that begins with all its innocence and youthful exuberance, materializes and blossoms into a concrete representation of dreams realized and challenges negotiated. 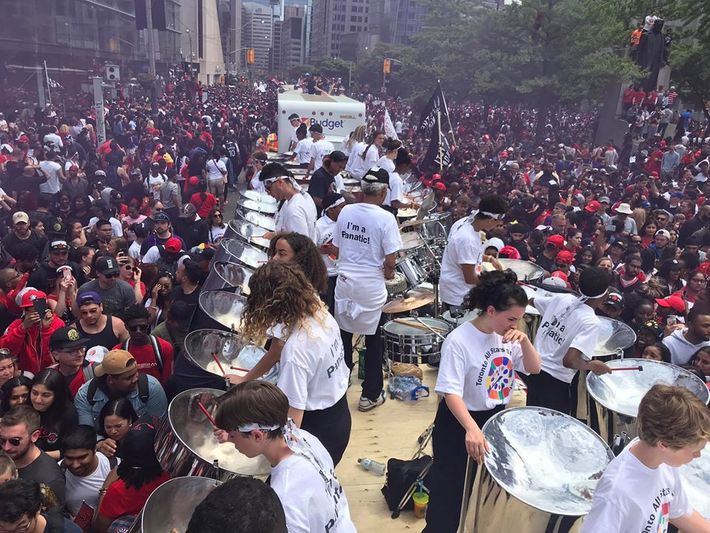 Salmon, “Small man”, Cupid, it has been indeed been a pleasure and a privilege to be a fascinated and admiring bystander in your unfolding journey. Special kudos to your mom and dad, your brothers and sisters for believing and supporting you; to your wife and daughters for their love; the Toronto All Stars for sharing your dream and to Duvonne Stewart for endorsing another one of your dreams the E-Pan. If this is what your latest chapter looks like, we can only await the continuation of your story, with bated breath.

Moses, this is a well thought-out-and-written story of Salo. It's a testament to his character and personality.  His journey is far from over!!!  (The "See More" at the end does not link, please advise where the original article is published, thanks...)

Thank you for this riveting story.  You have done an excellent job of detailing a student's progress in life.  Your pictures added to my emotions when seeing our national instruments surrounded by thousands of fans celebrating an historic occasion.

Thanks for your insight for sharing your memories with all 20,000 members of this WST forum.