So GREGORY LINDSAY play fas' with himself and try to steal the LIMELIGHT from the WOMAN IS BOSS PRESIDENT -- that was the end of him and the CORN PROJECT ... 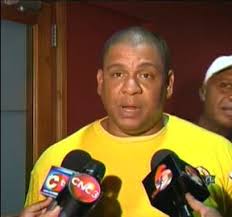 GREGORY playing BIG MAN and showing initiative in THE EYE SORE PROJECT. Arrive on the scene with TWO VENNIES and put them to work and paying them AH THOUSAND DOLLARS to CUT THE GRASS and buying them LUNCH and TING -- he BIG SO.

And with that he step on BEVERLEY CORN!!! So she call the man into the office for a meeting and then she never showed up. But she did leave a message with THE SECRETARY telling GREGORY that she was going in a different direction from him with the project. A nice way of saying: YOU ARE FIRED for trying to UPSTAGE ME in front of MY GALLERY.

PAN TRINBAGO MONEY spending LEFT AND RIGHT with ZERO ACCOUNTABILITY. Nine months left for the administration and NOT ONE FINANCIAL REPORT  as yet.

FRIENDS GETTING LOANS!!! CONSULTANTS GETTING PAID BIG DOLLAR$ to ADVISE BEVERLEY!!! SELECTED PAN MEN GETTING PAID and if you not on the ADORATION LIST -- don't even try to get an appointment with THIS PRESIDENT.

FUNDS are not being STOLEN like under KEITH DIAZ and RICHARD FORTEAU -- they are just being MISDIRECTED. Six of one and half a dozen of the other!!!

TRINIDAD PAN MEN going HUNGRY and HALF THE MONEY spending in TOBAGO. And guess what them BACKWARD THINKING PAN MEN going and do in OCTOBER -- VOTE BEVERLEY BACK IN OFFICE.

GREGORY LINDSAY: If you really LOVE PAN the way that I FEEL you LOVE PAN -- we have to TAKE DOWN THIS PRESIDENT. And doh BACK BACK on meh eh!!! Ah hear MENDEZ and CARLON and DANE negotiating BIG SALARY INCREASES to stay and CAMPAIGN for the team that promised to REBUILD -- but end up STAGNATING PAN for THREE YEARS.

The beat goes on....So allyuh tell meh something, wah happening to the garden?