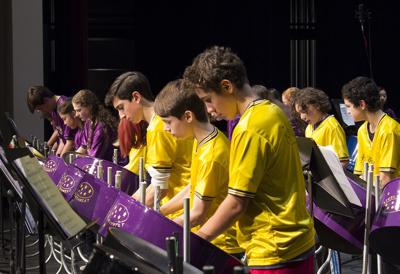 The 32-player “Pan Wizards Steel Orchestra” is performing at the Ellensburg Farmers Market on Saturday.

The 32-player “Pan Wizards Steel Orchestra” will perform at the Ellensburg Farmers Market on Saturday, according to a news release. The music starts at 11 a.m.

The group is the advanced youth ensemble of Steel Magic Northwest, a Seattle area non-profit providing after school steel band as a youth development activity. This performance is one of the stops on their four-day regional tour to Montana.

The group is directed by Gary Gibson, a Seattle area resident who is internationally known as a steel band/steel pan specialist and composer. He is also the founder of Steel Magic Northwest, now in its third year of programming.

“The band has a large physical and sonic presence,” Gibson said in the release. “The sound of the instruments takes on a much different, more orchestral character when played in such large numbers. This is why we call it a steel orchestra.”

It is good to see WHENSTEELTALKS giving some RECOGNITION to WEST COAST PAN!!!