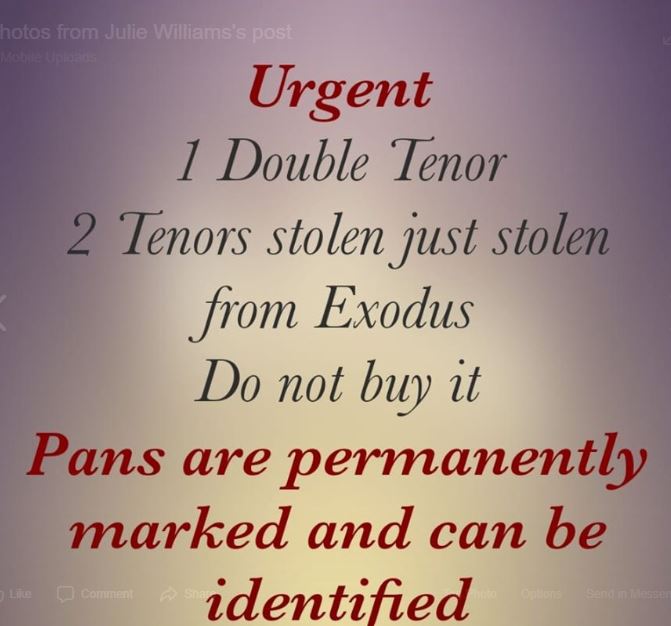 It was robbery, just before dawn at the Exodus Steel Orchestra, on the Eastern Main Road where two young men, who may have been armed, walked into the panyard demanded the keys for the band room and then stole two tenor pans and one double tenor.
They’re worth more than TT$20,000.
Five hours after the robbery occurred- and was reported to the police, the captain of the Exodus Steel Orchestra, Julie Williams, was awaiting a visit from the cops.
The Emergency Response 999 said they passed on the report to Tunapuna and Tunapuna said it was passed on to the St Joseph station. A few hours ago they said they would have been here in half an hour,” Williams said.
But when I called the St Joseph Police Station to inquire about the delay, anonymously, the Sergeant on duty seemed unaware of the robbery which occurred, incidentally, in the midst of the Eastern Region preliminary round for the Single Pan bands which started last night and continues tonight.
“I have not seen them as yet,” Captain Williams said as she waited with her other witness to the robbery, Archie.
It was shortly before 5 AM when Williams and Archie went to the panyard to collect items she had intended to lend to St George’s College in Barataria which is hosting a fundraiser Movie Night tonight.
“Archie came with the keys to meet me.
“After I drove in, Archie went up to the small gate and while he was there I opened my car trunk and started removing things and taking it upstairs.
“Then I saw two men approach as if they were walking out of the panyard, which was strange because we had just opened the gate.
“I opened my mouth and they started running out to Auzonville Road (next to the panyard)
“Next thing I know is because they returned to the yard with one man with his hand on his chest like he was holding a firearm.
“And he ordered: “Don’t move”. The other man threatened to beat me up.
“I have no money”, Julie told the young man and in her fright even offered “they have money upstairs”.
But they specifically asked for the keys to the band room gate
“I had an old key and I threw it for them and started to run because I am not playing with my life.
She ran up the incline on to the Main Road and kept running leaving her car open with the keys.. and even her phone.
But the young men were not interested in that. They came for the pans.
They took a double tenor and two tenor pans and passed “below the river” on their way out, Julie explained, adding that it must have been the way they entered the yard from the back when they were first spotted.
“A homeless man said he saw them walking with the pans but he did not know if they had guns and he saw them get into a silver wagon on Auzonville Road.
The pans are permanently marked, engraved with the Exodus name- and a number- on both sides of the instrument and should be easily identified.
So there is a call for the steelpan community to be on the lookout for the instruments.

Crime has finally and officially arrived at the pan yards (sacred ground). This is bad, that steelbands are now targets of banditry. It is good that the pans are marked and that the word is out...extra measures of verification with shipping companies and also checking on people who are leaving the country with pans should be noted and monitored.

Stand up for the pan and let us work to stamp out this curse of banditry.

Sorry to read about this and the late response of the Police. Happy no one injured.

They are stealing our culture too. Nothing's safe.

So the bandit just happen to be in that area at 5am?

Cecil: You never leave PORT OF SPAIN and went to ST JOHN or ST. AUGUSTINE or TUNAPUNA. People does have to get up early in DEM areas to make it to town in time for work. So bandits does start to PROWL early!!!

Especially the big sponsored bands can afford to pay a security firm and have security cameras and build better security walls and gates also equipped with electric systems where they can sustain electrical voltage shock large enough to stun them out temporarily. Criminals with guns must be dealt with seriously. This is why I say the modern big band is a million dollar enterprise where valuable assets are held. It's no long made out of rubbish pans and dustbins. The governments of T&T haven't got a clue of actual wealth which lies in the steelband movement. They are also thieves so what do we expect.  It's not finished yet. They may come back for the captain who got a face picture of them. Bad business there. Some gun men can even be hired  by the band as well. They have to deal heavily with those killers. They need to be destroyed really.

It's not a crime if someone enters a home or business premises, and a big band falls under a private business premises. It's not a public place. You can destroy your opponent with any weapon or means available, so long as one reports it immediately. It's called survival of the fittest. You can even kill a bandit with his own unlicensed firearm or knife or cutlass if you can. You can destroy them with your own weapons as well. it's not against the laws of God and the universe. If someone attacks you in your home tha's not the time to go coward. That's a time to kill if you can.

Are you seriously suggesting that Ms Williams should have disarmed the gunman and shoot him with his own gun?

Not suggesting any thing like that Kelvin. It depends on whether the circumstances had permitted that to take place. It was obvious that the circumstances didn't show itself. I am simply pointing out that citizens do have the right to defend themselves to the end. A license firearm holder should form part of even the steelbands now and train men to use it. Unless the thieves and killers in T&T especially know that it is possible that business and premises owners can have weapons as well, they will think the country belongs to them. I am pointing out human beings have the right to kill at times. That's why the Bible says also, "There is a time to kill" It says one should not kill. But there are times in life one may have to kill. It is those times that have to be recognized in law properly. If someone comes into my property and snatches my wife or a family member and demand my bank account, why should I not kill him if I am offered the opportunity in law. But If I am totally unarmed, I become a sitting duck.  It's there in the Quoran and in the Bhagavad Gita and the Vedas. The problem really lies in the government administrations. People do not know. But they run to lead people. They harbor criminals in many ways and they hesitate to issue licensed firearms and train people to use them. One may argue that the police is there for  that purpose. No. The police really responds quickly if there is already a killing. In other words they come quickly after the fact. Take the point of the captain saying only after 5 hours they came. If one rings any police station and makes a complaint of a break in, the station should be able to contact the nearest squad car within the region of the crime. That's another thing squad cars are missing in action at that time of the morning.  That can be done in this era of high  technology. No excuses now. Yet it is not done. The squad car can then quickly visit the scene and pacify the affected persons and then proceed on to contact the police station which covers the area to send men. So the police have the authority but when citizens call on them, they are not there on time. This is what I am pointing out that as a last resort people can rightfully arm themselves to protect themselves from criminals. Yes, there is the police but they cannot protect on time. Yes there are security companies but the cost of that is very expensive. When business persons ask for licensed firearms it is not done. So this leaves the criminals with a field day virtually owning the country by the appearance of a gun to any one's face. This is not human life. This is a life of the jungle where the strongest wins. The criminals know this so they take advantage of this. Now here is my suggestions for businesses. That they either higher security if they can afford it or  have their own weapons whether licensed or not. If someone kills an intruder within a compound there is no offense either to the law of God or the State. At the end of the day one has to defend their wealth and life at ALL MEANS POSSIBLE.  So I am saying its not a time to cower under. It's a time to be armed and dangerous within one's compound and that will be the right thing to do. When criminals know that it is not that easy to walk into a compound of any one and hold up people and ask for keys, then such crimes will become less prevalent. I am not suggesting violence. I am suggesting the the laws of the universe and how it works. One is entitled to defend one's property and assets and one's family. That's a God given right. I am not a criminal but I am a follower of universal laws of God. If you only leave it up to others, others will disappoint you. The time is coming in T&T where we will have to defend ourselves Kelvin. It's simply getting worse by the day. This is my point.

Sidd: We don't need to KILL THE BANDITS. Round them all up (about 6000) and put them in a LABOUR CAMP and teach them to MAKE PANS among OTHER SKILLS.

I agree to that at 100%. But here's the thing the governments don't seem to want to take that on.The mere fact that the two main parties haven't done it before means that they don't want to do it. Meanwhile the bandits rule T&T along with the police as well..Human beings at the end of the day with or without governments and without man made laws have the right to protect themselves, family and businesses. This is my point. In my view of killing in this aspect is a righteous act and it is also the view of most world scriptures and God Himself or Herself or Itself. Just as the bandits have the "right" to rob and kill us, we must return gun fire with gun fire. If the police and army is not doing it, then the calculation is the bandits rule.And they know this too. This is the real fact that is taking place. It has been too long a little place like T&T with so much bandits. But you point is well taken and I think about that all the time. Idle minds are the devil's workshops. 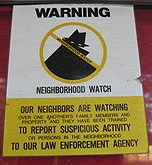