The Illustrated Story of Pan brings together the results of Kim Johnson’s two decades of research into the oral, documentary and pictorial history of the steelband movement. It combines the intellectual rigour of a leading Caribbean researcher with the storytelling of a prize-winning journalist. It puts you there as pan – the most important acoustic instrument invented in the 20th century, the music and the steelband movement – is brought into being and developed to its present complexity.

Hundreds of magnificent never-before-published photographs put you on the scene while, through Johnson’s interviews with as many pan pioneers, you hear their voices recount their never-before-told stories. 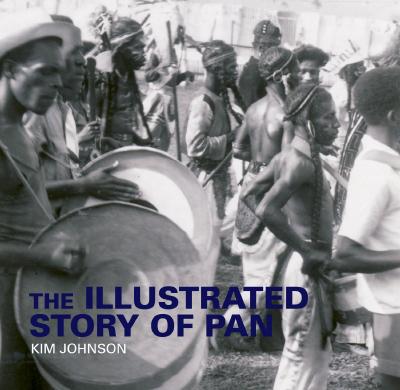 This is a tapestry woven of the stories and photos of many bands great and small, created by many men and women from all walks of life. It brings us the struggles and challenges they faced, their defeats and triumphs, their courage and humour. There are musical and artistic dimensions just as there are social and political ones. The cast of characters in this epic include musicians, calypsonians street fighters, prostitutes, politicians, policemen and many others but mostly ordinary young people from all classes as they accomplished extraordinary things.

Successive chapters take the reader from the African-inspired percussive practices in Trinidad, to the invention of the earliest iron bands such as Gonzales Rhythm Makers and Alexander’s Ragtime Band. The biscuit drum “booms”, the bass-kittle du-dups, the tenor-kittles and bugles, all are shown, starting with invention of the first notes on the early metal drums and moving through the earliest recordings, the rise of steelband warfare and the brutal social reaction. The rise of nationalism and the attempts by politicians to enlist the steelband movement to their cause. The struggle to invent a music for the new instrument and the insistence on being recognised as a legitimate member of the family of musical instruments. The rebellious years of the 1970s and the battle against the social indifference of the 1990s.

Permalink Reply by evan lobo on November 22, 2010 at 8:15am
looking forward with great anxiety to see something new
in time for christmas would be nice

Permalink Reply by Tony Blackman on November 22, 2010 at 9:12am
This is the type of archival stuff needed urgently...it is overdue.... steelband facts have taken way too long to be compiled, marketed, distributed and archived

Permalink Reply by Andre-Roger Dellevi on November 22, 2010 at 11:03am
Highly anticipated. Can't wait to see how the e-volution of pan is addressed...

Permalink Reply by Mark Mañuel State on November 23, 2010 at 5:52am
This is really nice! Who is publishing the book, and when will it be out?

Permalink Reply by Bugs on November 23, 2010 at 11:13am
Mark I think I saw somewhere that it was going to be published by the University of Trinidad and Tobago.

Permalink Reply by kambiri de suza on November 23, 2010 at 7:17am
let me know the price and date of the launch I will be there excellent work