Over the years I have recognized that on social media, replying to people’s comments is sometimes not advised. Everyone is free to sit in the comfort of their home or workplace and type whatever they feel. They speak with authority on topics that they are not familiar with, whether it is factual or not.

I am very very very very passionate about Steelpan and Steelpan education. I have been a Steelpan educator with the Toronto Board of Education in Canada for the past 27 years. It hurts me at my core, not the fact that Canadian kids are being taught music through the use of Steelpan, but that this is not being done in the motherland of the Steelpan invention. 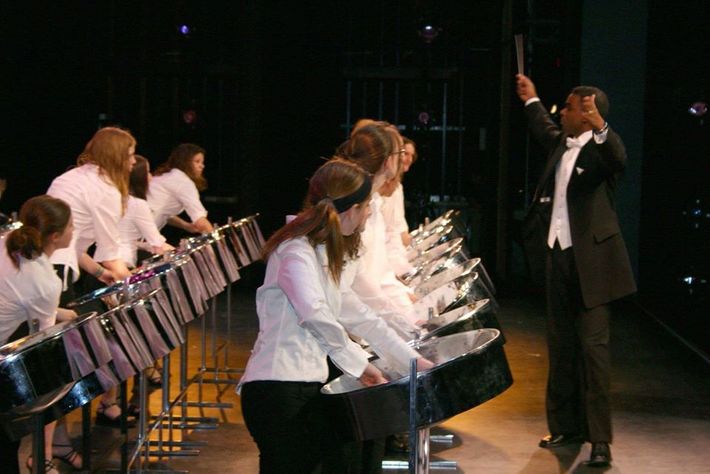 My above post is NOT geared on people analyzing or adding up how much the government of Trinidad & Tobago has spent on Panorama over the past 50+ years. I do not want to get into a Panorama conversation otherwise I will have to write a book! I support Panorama. I will always participate in Panorama. It is important to note though that, In my opinion, Panorama needs a systemic overhaul. For the past 50+ years, Panorama has done the job of shaping the instrument and art form to what it is today. The advent of Panorama is a part of our cultural identity. In present-day, It stimulates in us a sense of community and belonging. However, unless serious evolution takes place, it is going to be the world’s biggest barbecue needing millions in government bailouts to be realized annually. Pantrinbago should be independent by now. Steelpan in Trinidad and Tobago, under the stewardship of Pantrinbago, should be a well oiled industrious machine.

Back to my original post dated Saturday 04th July 2020.

Education in nearly every country in the world comes under the mandate of the government. Hence the reason that I called out for anyone to tell me which government over the past 30 years has taken Steelpan seriously. I have a question: does EVERY primary school in Trinidad & Tobago have a room full of Steelpans that can accommodate an ENTIRE class? I will answer for you. The answer is a shocking NO! There are 477 primary schools in Trinidad & Tobago. On record, 118 of them have a set of 16 steelpans (not even a full class can be taught at one time). There are only 50 steelpan teachers. Some may say that this is fantastic. I would say that this is fantastic if we were in the year 1995.

The above accomplishments were products of the hard-working Pan in Schools Coordinating Council, which was formed in the late 80s.

In the late '80s and early '90s, some forward-thinking educators in Trinidad and Tobago created a group called Pan in Schools Coordinating Council (PSCC). People like Teddy Belgrave, Andre Moses, Pat Adams, Godfrey Joseph, Victor McGill, and Nestor Sullivan, to name a few, are to be recognized for their efforts for doing something of Pan. From those efforts the Ministry of Education took notice and they formed a unit called Pan in the Classroom Unit (PICU). When the government changed to UNC, they changed the name of the unit to the Multicultural Music Program Unit (MMPU), and from then on, in my eyes, it became watered down. They made it a race agenda and claimed that schools wanted the Tassa Drum instead of the Steelpan.

To me, there needs to be a refocusing where Steelpan education is concerned. The goal is to educate our youth in music using our national instrument as the instrument of choice and not the recorder. PUT PAN IN SCHOOLS!!!! Put Pan in every single school. Not just the 477 primary schools, but in secondary schools as well. We have a long way to go.

Just look at the results of the 2020 PANOGRAMA and the International Pan Ramajay where do the winners live ? Where did they go to school ?

For those of you reading this, wake up and do something for Pan. Stop looking at the sky and expecting change to fall in your lap. The above names I mentioned as a part of Pan in Schools Coordinating Council (PSCC) did something. They stirred the pot. Don't take my words here and find a "t" I didn't cross or an "i" that I didn't dot. Refocus that energy on positive change.

I have to say that SALMON CUPID is one of the MOST DYNAMIC MEN I have ever met in my life. His energy field is almost COSMIC.

And I am happy to see (that as a TRUE TRINIDAD PATRIOT) he was EXTREMELY RUFFLED by the results of the INTERNATIONAL PAN RAMAJAY.

Claude what is Marcus Ashes opinion on this?

The elephant in the room question is.  IF things were to change in T&T, for the better along the lines you suggest, would you return there to become and active part of the solution?

Salmon Cupid, you have made excellent points that are very relevant and essential to a larger discussion on the evolution and advancement of the steel orchestra/musical steel industry in Trinidad and Tobago. Think about it, you have correctly identified limitations/problems, which in reality highlights the complexity of the steel musical industry in T&T. As such, reforming T&T's musical program would benefit from an expansive inclusive businesslike methodological approach. A solution to the current dilemma will continue to frustrate and elude us, unless we seriously take the time and make the effort to consider the development of a broad based strategic plan. If that is not already being done, let us take the time to support and recommend the value or merits of crafting a solution oriented strategic plan to guide the advancement of the musical steel industry in T&T.

The author has undoubtedly CROSSED every "T" and DOTTED ever "I" in the foregoing...

"In the late '80s and early '90s, some forward-thinking educators in Trinidad and Tobago created a group called Pan in Schools Coordinating Council (PSCC). People like Teddy Belgrave, Andre Moses, Pat Adams, Godfrey Joseph, Victor McGill, and Nestor Sullivan, to name a few, are to be recognized for their efforts for doing something of Pan. From those efforts the Ministry of Education took notice and they formed a unit called Pan in the Classroom Unit (PICU). When the government changed to UNC, they changed the name of the unit to the Multicultural Music Program Unit (MMPU), and from then on, in my eyes, it became watered down. They made it a race agenda and claimed that schools wanted the Tassa Drum instead of the Steelpan."

Why is it that each time an idea or suggestion is given from someone in foreign there is talk about if you are willing to come and  implement it.? People in foreign are concern about what goes on in the homeland and make suggestions with the intention of "helping out" they care...

Please WADR, I know Salo and he knows exactly where I am coming from.  Ask him what my input has been to mentor and guide him through the years and you'll get a sense.  What T&T doh want foreign "helping out" in person??? lol

Andre: Timbre and Tongue in Cheek often get lost in a medium like this -- and lead to a lot of misunderstandings.

Tru Dat, guilty of it myself, on occasion, but Salo is meh pardner and he knows me very well...

If a survey is conducted in T&T, including expats, I suspect that the results would indicate general consensus on the need to build on a rich legacy of steel orchestral music in T&T that transcends geopolitical considerations. By disregarding minor/secondary distractions, there is much to be gained by focusing our energies on pursuing common cause in advocating and supporting the advancement of T&T's treasured musical gift to the world. Let us embrace an all-hands-on-deck approach that would unite us through shared purpose and effort. I am confident that if we all work together there is so much more that we will be able to accomplish. May I challenge everyone on this forum to focus on promoting the notion of a cooperative approach to accomplish what we all want, - the advancement of T&T's musical steel industry.

I wonder where ‘PanTrinbago’ fits in all of these discussions for improvement?