The Role Some People Choose To Play? by Michael L Joseph - Pan Trinbago

Every one in life have a role to play. Some people just can't help it, their role in life is to create strife and confusion. One must learn to live with that only because, you did not write the script.

Pan Trinbago  Inc T.C, has been under attack throughout its evolution. But never before in its history, did the fraternity ever found itself fighting for its very survival. Defending itself against FALSE FLAGS AND FRIENDLY FIRES.

While some struggle to hold on to, and preserve our indigenous art form, and control the commanding heights of the industries spawned through it, there are those amongst us, whose only hobby is to sow the seeds of destruction, wanting office by any means necessary, thereby, showing contempt and total disrespect to a membership, who consciously expressed their rights to participate in free and fair elections, by which this present executive came to office. There was no backdoor entry. Some of you participated and was rejected.

Fascinating Passage!!! Especially since it broaches upon a resolution that I have long been entertaining but never dared to mention.

Did somebody MAN UP and intimidate the PAN TRINBAGO EXECUTIVE?

Very interesting article Sir, I did not read anything about the cars imported from the U.K. and Millions of Dollars in dept. more transparency is needed. Have a good Easter.

Claude:As far as I know violence with the steelbands and pan men is a thing of the past. so I do not know why the good gentleman made the remarks ( "Doe bring the doye doye here"}.As far as I know the group that wants a change in Pantrinbago is going about it the peaceful way. EASTER BLESSINGS TO ALL.

Permalink Reply by Bertel Gittens on April 15, 2017 at 11:28pm
I wonder whose role is it to pilfer Panplayers money and run Pan into the ground???

That is their role and anybody who try to change that is a TRAITOR TO PAN MOVEMENT!!!

It has been said that Michael Joseph was the Executive member who advised Diaz to ignore the Mandate of the October 30th 2016 AGM,Mr Joseph has never denied this accusation.Mr Joseph presumes he is the SOLE authority on PanTrinbago's Constitution,and can quote,interpret,or be treacherous to Constitution as he pleases.

Here is Mr Joseph in his latest foray into SELF CONTEMPT.

"Are you displaying your best leadership qualities?"

" Whose interest are they serving?"

"it is going against our mandate."

Bro Scobie could accuse people of all these actions,and still expect any SANE person to believe he has any sense of decency?

He now invents this "doye doye " conversation to lay blame at someone's feet,for actions he may initiate.

I would advise Mr Joseph to stop this malady NOW!

He would be better advised to tell us where the 5MILLION dollars that were suppose to pay Pan players Semi Final remittances went,as players are still owed for 2016 Panorama.When are the Junior Bands players would get there moneys?

He could also spend some time telling the members of PanTrinbago where are the luxury vehicles they paid for.

He could also tell us how much profit the Steel Drum Factory made.

He could also tell us how much profit Pan in Schools Project made.

He may wish to deny that he is receipt of a monthly travelling allowance plus a PanTrinbago rented vehicle.

He could spend valuable time on so many things besides SELF-FLAGELLATION.

But the best he can do, is MAN UP!

Permalink Reply by garvin adams on April 16, 2017 at 6:11am
You full of shit, you are use to Easy Money, take your bundle and go, we need new executives who can be accountable. 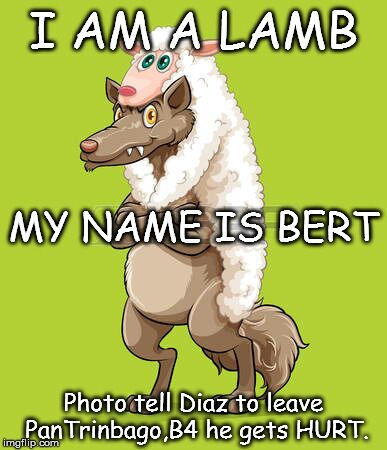 It seems this Meme is what has Scobie,grasping at straws.....some would say "thin air"

The genesis of this meme is the numerous reports of infighting in the Executive.

The are also reports of the Financial Advisor keeping Executive meeting without the President's knowledge.

It seems that it's a President (Red corner)  Vs  Financial Advisor ( Blue corner ) showdown.

Ah wonder whose side Scobie on?

Thoughts have great power... You create your feelings and experiences by the thoughts you choose to think. You have the ability to actively guide your thoughts in a positive way. Frequent repetition of the same vile types of thoughts you intimate creates your beliefs and attitudes. Your thoughts are like seeds that HE the President Diaz plant in your mind. The more that you hold on to a particular kind of thought.... The more power that you invest in it.

Your negative thoughts are those of doubt, aggression, worry, guilt, jealousy, etc. These thoughts continue to rob the pan constituency of power and strength and make us as a community feel tired and drained.

Brother Scobie, what you believe comes true for you...you cannot control other people, situations and circumstances. You can control what is going on of you.

Brother Scobie, your true nature is positive. The negativity that you are exuding is just a result of faulty thinking. You can change it if you choose to.

Develop the habit of watching yourself, and Listen to what you are telling your self........YOU ARE WHAT YOU THINK....