Ok I want to say that it is time to form an organization or union to represent musicians. I have been very impressed this year by Voice the 2016 Soca Monarch and i want to take this time to congratulate him on his victory and his winning song, Life has really been good to him and that opening line...From you wake up this morning..Yous a winner" is such a fantastic opening line..I have to congratulate Voice for his song Cheers to Life because it represents what young musicains can do and also that our young musicians need our support. So again I am calling for the creation of an organisation or a union to represent musicians that helps them negotiate the local and international market. Big up Machel Montano who has been working to open doors for our music abroad and a special congratulations to Bunji Garlin and Maximus Dan for their award at the 2016 Grammys. So to all who listening write up the constitution and let me be the fist member to pay my dues.

odw ,can you expand on the relationship between NATTS and NJAC,which Willliams saw as a threat and led to Goddards resignation?

The Steelband and the Black Power Protests of 1970.

The Black Power protests also highlighted the position of the steelband movement in the nation’s economy and political life. By 1970 panmen had begun to seriously question their relations with the state and with sponsoring business. There was a sense that the government‘s programs and the sponsors’ contributions had failed to improve appreciatively the pan life. Thus many panmen were receptive to the idea of Black Power and some.

Eric Williams realized he was losing support among pan men, and then in the midst of the Black Power uprising, he initiated a series of meetings with the steelband leaders to discuss the movement’s chronic problems and develop solutions. Among the proposals suggested were a steelband research council, a steelband co-operative, government assistance in helping unsponsored bands find sponsors and greater projection of steelband music on radio and television.

In the course of Williams steelband conferences. Geddes Granger, the leader of NJAC, accused the Prime Minister of “using the steelbands men”and added that the “Crash programs will not fool anyone.“ Though steelband leaders continued to negotiate with the PNM government, they also held meeting with NJAC to discuss common goals. George Goddard, the President of NATTS at the time, states that he initiated this meeting in response to rumors that the PM was using him and the steelband movement as a whole against NJAC.

Shortly after the NATTS_NJAC meeting, George Goddard spoke at NJAC’s “People’s Parliament” in Woodford Square. According to Richard Forteau, Goddard realized that his service as government steelband advisor was assisting the PNM more than the panmen themselves. So he decided to inform the gathered crowd in Woodford Square of all the proposals that he had made to government and the government’s failure to enact those proposals. In addition, he asserted that the sponsorship of bands was not motivated solely by a desire to develop pan music and the panmen were being exploited. During this period Goddard also stated to the press that Williams intended “to divide and rule the steelband movement.”

odw,try as hard as I might,I cannot recognize the history as it's written here,maybe it's old age or maybe I was asleep in those heady PT meetings that resulted in "No Pan" ....I was also probably asleep in NJAC Exec meetings, and misled myself to believe that the vast majority of panmen were mostly interested in the financials of Panorama,and really showed no zeal to support "de Mombassas,Dingakas" (as some of the elder panmen would call the younger ones) who were much more receptive to the "People Power" movement, and were eager to change the political status quo.

Thanks for the reply,it is interesting to read that insight into that period's history.

Oswald, it's more like an academic exercise. Stephen Stuempfle spent time in Trinidad doing research on the steelband movement for his book by the same name. The Forging of a National Art in Trinidad and Tobago.

Here's a look at his profile...http://indiana.edu/~folklore/people/stuempfle.pdf 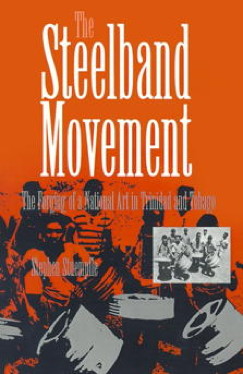 Thanks again buddy, it's just that the experiences others and I had of those events does not match the retouched version.

Oswald, There are different experiences. However the overlying truth is that Dr Williams didn't really love pan. He was virtually forced into it by Beryl Mc Bernie and some others at that time. He had to "react to it" not see it as an economic source at that time. But it was always more of an economic source than a political source. Both Bertie Marshall and Rudolph Charles had terrible experiences with the Doc. It's in their own words on the net. Search it out.To-date the PNM government has never really did anything for pan which would enhance the economic position of pan makers, pan tuners, pan players, pan yards etc. Therefore the crisis of pan continues.. That is the actual experience results. Steelpan Movement the book was written not to offend the PNM and the Dr. so it had to be summarized and not really in detail. It is a fact that Mr. Goddard Sr. was misused and he realized it at the end. Ellie Manette is a live source of "hur"t information about the Dr and PNM misuse of the pan culture as well. He never bothered with T&T for this reason and the Universe still supports him.

Don't let this just be talk and talk again.

Somebody get up and start the ball rolling. Be responsible for your own future.

"Build it and they will come" as the saying goes.

A union is formed by musicians themselves. It simply takes some musicians coming together and forming a musicians union which technically falls under the umbrella of the Trade Union Act of T&T. However, the musicians themselves should not run it themselves. The musicians union should now hire professional Trade Unionists and managerial personnel and lawyers who would have had some experience in running a Trade Union and more so a musicians' union. It's also not an easy thing to run. It's no walk over. Dues will be collected from musicians members in T&T and banked and accounted for after relevant expenses. The hired professionals must be paid their salaries commensurate to their professional experience and academic qualifications. The Union cannot invest the funds of the musicians without the majority vote of the member musicians. Fees paid by promoters must be established and negotiated by promoters and other such standards of promoters and the Musicians Union itself must first be arrived at between them and then an Act of Parliament must occur and be written by law makers and passed in Parliament to make it law. .  Other Bodies such as The COTT and other copyrights bodies including the Carnival Bodies controlling road music played by Djs, instrumental bands and steel bands  on Carnival or other parade days. The Musician Union should concern itself with the hiring of its member musicians to play live music as apposed to recorded music. Recorded music is in the domain of the Copyrights Associations already.  Promoters giving fetes and parties or events of various types where musicians have to play live will fall under the Musicians Union in terms of what fees or salaries are to be paid to the hired musicians involved. What part of the fees will go to the musicians themselves and what part will go to the Union which is apart from musician member fees. What will be the arrangement between Pan Trinbago and the Musician Union in terms of Panorama. One of the things which will need to change in that relationship with pan Trinbago or NCC if and when the Musician Union comes into effect is the payment to the pan musicians who are members of the Musician Union. despite the fact that Panorama is a competition the organization who runs Panorama also plays the role of the Promoter of the event and at the same time represents the bands. The Promoter is the hirer and the hired is the musician member of the Musician Union. The main responsibility of the Musician Union is to seek after the interest of its musician members in terms of the appropriate laws under the Trade Union Laws of T&T and in particular relevant contractual laws in accordance with Laws governing specifically the relationship between the Musician Union and Promoters and the contractual arrangements between the member musicians and the Musicians Union itself. Also the contractual arrangements between other Musician Unions worldwide. There are much more complications to be worked out. All in all this is about a two year lifespan of work to be done. It is not a walk over thing like some of us think. One very important consideration is whether musicians must be full time or part time or both. Because the employment rate of musicians in T&T is very small indeed. So the Musicians Union has to consider part time musicians, part time workers in order to be be paid membership fees constantly for it to survive.

Looks like somebody, anybody everybody listens When Steel Talks, ent...  ;-)

And also this thread...  Who Am I? - A Breakdown Of George "Sonny" Goddard's Accomplishments

We know a lot about the history of the  steelpan/band but lacking the ability to move it forward, what must be done to solve this problem? we have been stagnant for too long.

Cecil: Simply a lack of administrative skills. The people who control pan cannot allow talented administrators to come in because it will expose their ineptitude and they are scared they might lose power. Until skilled administrators start contributing nothing will change. Take PAN MUSIC as an example. If you hire ONE SKILLED MUSIC DIRECTOR and ONE GOOD MARKETING AGENT you could have a talented PAN SIDE touring globally ALL YEAR ROUND showcasing the instrument.

Don't talk about the recording!!!

We could post until we blue in the face and NOTHING IS GOING TO CHANGE.