TWO CIP MEN (AQUIL ARRINDELL and GREGORY LINDSAY) kissing up to BEVERLEY RAMSEY-MOORE to get to go to PANORAMA IN TOBAGO ... DEM TWO FELLAHS use to be REAL MILITANT when KEITH DIAZ was in office -- now dey like MIDNIGHT IN THE CEMETERY.

Now Gregory Lindsay blaming THE LAST EXECUTIVE for the failure of THIS EXECUTIVE!!!

And Aquil Arrindell saying: Let's give them time to organize and implement their programs before we pass judgement.

Aquil should look at the CALENDAR and realize that ONE YEAR GONE ALREADY -- with NOTHING TO SHOW.

But BOTH AH DEM could KISS UP from now til February 2020 and they still eh making the FINALS IN TOBAGO because ah hear TOBAGO demanding at least THREE BANDS IN THE FINALS because is AH WE TING this year. 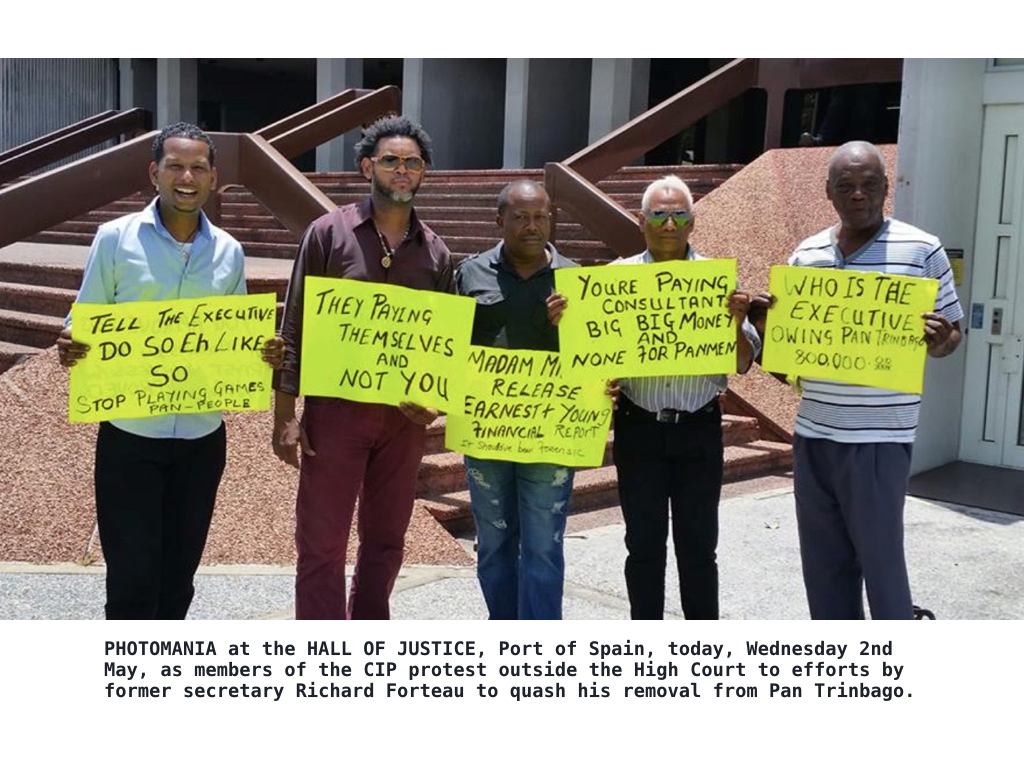 I admire the diversity of the CIP represented in this photo.

I have an important favor to ask, offline...Messenger, email..

My email address is rumroti@gmail.com

Gregory ....say the word you know.

Yuh know this discussion thread only have 58 views right now.

Yes Claude! I have been silent coming up on a year almost now. Why one may ask? The answer is to allow the President and by extension, the wide berth they needed to do their difficult task, which they signed up and were voted in for by the pan fraternity just shy of a year ago. In a three year term, one third of the pan body's political time has been expended, the deadline with the yearly performance appraisal time will soon be upon us on an amended AGM date if NOVEMBER 05, 2019.

Given the extent to which fair comment by you and others. which includes disagreement, in jest on not, on the issue of MY SILENCE during this honeymoon period to the President or Any Officer of the Executive of the organization; has been outstripped by misinformation and unreasonable speculation over this recent past, I would like to provide the following information.

I will not shirk in executing my responsibility as a delegate to this body, which my band is a part of; to not ventilate issues important issues, which maybe deliberately being stifled, because it may not be politically expedient to do so, especially with elections around the corner.

I am not about being politically expedient. I believe I may have  a lot to say, in the NEAR foreseeable future from within verifiable taxpayer financed historical document, that would contextualize a snapshot of a very turbulent time in the organization's history in terms of exposing THE alleged LEVEL OF SKULLDUGGERY and alleged THIEVERY and alleged CROOKEDNESS and alleged DECEPTION and alleged FRAUD the organization underwent during the period before this administration.

I think it is important to understand our past mistakes and transgressions and be transparently clearly to the general membership of the movement what got us as body to this financial state, as the President puts it ...that continues to plague and impede this executive towards putting forward a picture of corporate financial credibility in this movement and its members, to the view that one ought; to learn and improve in terms of the transforming the culture of proper governance structures that the new Executive has busy spending the last year to right this leaky ship; might I further add insult to injury that public monies paid for that report, now laid up on some shelf laid up in Hansard in Parliament; or speculatively buried for political expediency as....it holds the key to many questions unanswered for general membership as to the struggle of continued disrespect that the current President speaks about the recent article, towards financial credibility both inside and outside of the State sector.

Sharing missing pieces of the puzzle, as blood curdling as it may be might also provide some insight and solace to the financial licking that continues to affect the heart of the movement which is the players....who as usual prefer to be divided in counting a make believe pieces of silver to a payout that will only be noted as debts to be paid whenever; under a draconian fiduciary oversight crippling the organisation's economic franchise to articulate its Act 5 of 1986 mandate.

The worse thing that a person or body of people or a cabal can do is to underestimate the resolve of someone who has nothing to lose.

The primary mandate that the President and her team were voted into elected office was to clean up a lot of the above mentioned. Explaining via sharing critical verifable information as to why and how we got here, may make the bitter medicine of financial austerity more palatable to bands and players, unsponsored and sponsored, Single Pan to Large, for a second year running....

Picture dis WASA analogy, the weather system is de Government; the clouds is the Ministry of Culture; de rain is de money; de dam is NCC, and the distribution system that leaking more than 50% of supply in the GROUND swell of DEBT every day..to the tune of No money to pay allyuh...Time long like twine, but will this long rope of misery know any end?

If I remain silent, the next analogy might be a PETROTRIN analogy. I guess in this game of Chicken we will see who will be first to blink..

Gregory: I don't see the world of THE PAST the way you see it!!! On American TV, as they discuss THE IMPENDING IMPEACHMENT, there are constant references to NIXON and CLINTON -- but I don't buy those comparisons because TIME CHANGES EVERYTHING and I don't see THE PAST as a REFLECTION OFTHE FUTURE. Life is much more COMPLEX than that. Do you know why the WINDSHIELD is SO BIG and the REAR VIEW MIRROR so SMALL? I am sure that you know!!!

When BEVERLEY DECIDED TO RUN FOR PRESIDENT she knew THE STATUS of PAN TRINBAGO. Go back on THIS FORUM and you will see that from $5,000,000 in DIAZ DEBT -- I WAS COUNTING and WARNING. Now I have to admit that  my count was about $40,000,000 in debt when DIAZ and FORTEAU finally got voted out. So I was $20,000,000 OFF. But when I read the FORENSIC AUDIT REPORT and I saw how CORRUPT and GREEDY and ABUSIVE and  EXPLOITATIVE and WICKED that EXECUTIVE was -- is only then I realized the FULL EXTENT of their iniquities.

Now, I doh even live in TRINIDAD and I don't have access to 1% of the LOCAL INFORMATION that people like YOU and BEVERLEY have so I could make a little excuse for my miscalculation. But for BEVERLEY to COMPLAIN now that she get PUT TO BAT on a STICKY WICKET is NOTHING SHORT of HYPOCRISY and INCOMPETENCE. She had to know what was going on!!!

The bottom line is that in this day and age -- THAT JOB IS TOO BIG FOR BEVERLEY!!! She does not have the VISION (LOCAL or GLOBAL) to make PAN TRINBAGO SUCCESSFUL. So you all just want to keep LOOKING BACK and blaming EVERYBODY for the STAGNATION OF THIS EXECUTIVE.

Look, man: I have ENEMIES in LOW PLACES and FRIENDS in HIGH PLACES. And that is not by MY DESIGN. In life you get dealt strange hands sometimes  ... and this PAN TING is proof of that for me.

PEOPLE like you and AQUIL and many of the commentators across the PAN WORLD have to RETHINK PAN PROGRESS. Because BEVERLEY RAMSEY-MOORE with all the SUPPORT I see her getting from ALL DIRECTIONS is the WRONG PERSON to lead PAN TRINBAGO at this time. And in 6 years time I could come back and  CLAIM VICTORY on that score just like I did with KEITH DIAZ!!! If allyuh have all that time to waste -- fine with me. But I spend HOURS analyzing the GLOBAL PAN SCENE (Well, the AMERICAN PAN SCENE -- which is really the GLOBAL LEADER IN PAN -- and PAN TRINBAGO is decades behind  and falling further) and the LOCALS really have NO IDEA about how THAT INSTRUMENT is EXPLODING around the world and the responsibility that an organization like PAN TRINBAGO is expected to fulfill to keep up with GLOBAL PAN.

Time for you to JUMP OFF THAT BEVERLEY SHIP and get back in the BATTLE FIELD if you really LOVE PAN PROGRESS!!!