WHEN STEEL TALKS IS BOSS!!! All dem BOMBS dey dropping in the TRINIDAD NEWSPAPER today (PANORAMA SUNDAY) -- we done EXPLODE and DIFFUSE dem LONG TIME on THIS FORUM ...

MARK BASSANT running up and down THE COUNTRY calling this one and that one and looking for SCOOPS and WE at WHEN STEEL TALKS does just sit down RIGHT HERE IN AMERICA and all THE LATEST NEWS and INSIDE INFORMATION does JUST COME TO US -- LIKE MAGIC!!!

BEVERLEY is supposed to be THIS GREAT POLITICIAN and instead of making friends and influencing the RIGHT PEOPLE -- she think she bigger than ROWLEY and DOLLY combined.

People come and SPOIL meh ALL YEAR PAN0RAMA SUNDAY with all these OLD RECYCLED STORIES this morning. But ah hope that BEVERLEY learn she lesson and come off that SECRECY HEAD and start displaying some TRANSPARENCY. How many times I beg THAT WOMAN (ah sounding like BILL CLINTON) to hold a PRESS CONFERENCE and diffuse all the BACCHANAL.

Better yet, she should come on THIS FORUM and SET THE RECORD STRAIGHT since THIS FORUM is the GLOBAL EYES and EARS and MOUTH and NEWSPAPERS of ALL THINGS STEELBAND.

Well, BEV, if yuh too proud -- SEND MARCUS ASH to give us YOUR SIDE OF THE STORY!!!

Russell Providence, Merrytones, ODW  and you Claude never fell for the okeydoke

Gregory have to get some points.

Only the WST forum and Ghost facebook been on the case.  Everybody else busy smelling Pan Trinbago perfume. Now the perfume staring to smell like sour milk.

I don't know how they fool Cecil so bad. I think he still high from the Raptors wining the championship.

Where is that Aquil fella?

I am just here conquering the world.

you have something of worth for me to do?

if not, then where yeh ah cal meh name for?

You asked that everyone to give your president a break. It is now a year later. How do you think she is doing?  Why did she not make the report public?

I don't know you, and I may never get to know you sir, as I am a sucker at winning friends and influencing people. I have a strong suspicion that you may be a Trinidadian domiciled in another jurisdiction. I am also certain that you may know of the Trini saying,

I have modified the above saying to read:

Honorarium - a payment given for professional services that are rendered nominally without charge.

Beverley Ramsey-Moore is a corrupt woman, and wishes to sweep this audit under the carpet to protect The Aquil Arrindels and those whose names appear on the audit of thieves that was/are sympathetic to her cause, and dependent on or expectant of her largesse.

I am ashamed of Aquil, as he continually came on this forum, with the full support of Claude Gonzales paintIng Diaz and Forteau as thieves, and not mentioning that he was being rewarded with sizable pieces on the pie for just SKINNING HIS COCK. Greed may quite likely have been the factor that motivated him to come forward. It was undoubtedly the factor that squeezed dissent out of the covetous character of a former high ranking government/Pan Trinbago official at the time, who it is now evident, was dissatisfied with the portion he was receiving. 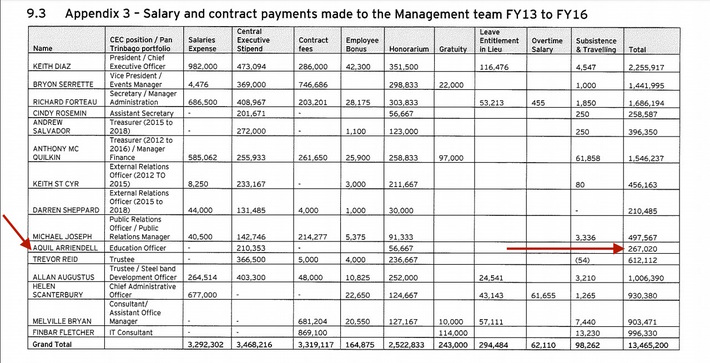 Permalink Reply by merrytonestothebone on November 18, 2019 at 9:17am

This is so heartbreaking...