Will the BIG 5 CONCERT run at a PROFIT?

This could be a new day dawning for STEELBANDS in Trinidad. Perhaps we could enter the era of TRANSPARENCY. What if after THE CONCERT the BIG 5 sends a representative to WHEN STEEL TALKS who discloses all the numbers pertaining to the show. A complete breakdown on attendance and gate receipts and income from sponsors and income from refreshments and parking and what have you (they like to say "what have you" down in Trinidad) against ALL EXPENSES -- giving the general public a true and honest PROFIT and LOSS report from the show.

That level of TRANSPARENCY could put the ISF/BIG 5 in very good standing with a lot of EXPATS around the world. And I could see how such an act could help THE ORGANIZATION both locally and globally.

My expectation is for the BIG 5/ISF to put on about THREE CONCERTS for the year. So we have to start planting seeds to make the shows profitable. If they are smart they could take a LOSS from this show and make a CORNERSTONE for future PROFIT.

The Big 5 can be very profitable. However, they will have to take their show on the road. They will have to be very careful not to play in the same country twice within a year to two years span. They will need real PR professionals and promoters. They need a 5 years plan.

If they REFUSE to take ADVICE from EXPATS they may need A 99 YEAR PLAN!!!

Two of the founding members Michael Marcano and Ainsworth Mohammed are posters on the forum, any one of them should answer your call... 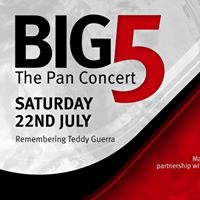 People, Big 5 stages started going up on Friday. Four bands would be set up, so there will only be need for one change over and you can expect a smooth transition between bands.

Gates open at 5:00pm and Exodus opens the show at 7:00pm.
Walk with your cooler as no alcohol will be sold at the venue. There will be food on sale as well as ice, juices and soft drinks. Tickets for Big 5 - The Pan Concert are available at Lotto booths nationwide and you can also pay at the gate. See you on Saturday at this seminal production of 5 pan titans.

Dey putting the "COUNTRY BAND" to play first -- sounds like GEOGRAPHIC DISCRIMINATION to me.

Could be a question of OPTICS you never know...dey saving the best for last.

Phase II - Fire Down Below (version)

Taking the show on the road could cost a pretty penny, who is going to finance that? They should focus on a road show carnival Monday afternoon, that's their only hope in the Mecca.

Patrick Ramdoo: Ah vex with you!!! Yuh come and turn up meh HOLE CARD before the show even done!!!

The BIG 5 will be forced to take a long hard look at their functionality in today's world. All over the world you can find Steelbands playing good music,  If they could match what the St Margrets Steel Orchestra does that's alright other than that what can they offer? I've said it time and again, the only thing they could for the steelband today is rejuvenate their presence in Carnival.

Cecil Hinkson: Do you think that the "BIG 5/ISF" went and hire these SIX HEAVYWEIGHT CONSULTANTS just so that they could rejuvenate the steelband presence in Carnival?

Claude It doh matter who they hire, THE STEELBAND WAS CREATED TO BE IN CARNIVAL.

What I am saying is that dem BIG MEN eh go waste their time trying to PUT PAN BACK IN CARNIVAL. However, their time will be wasted trying to think that they could suddenly TAKE PAN ALL OVER THE WORLD. Because, as you said, it have STEELBANDS playing good music almost all over the world. Until they put some EXPATS on that consulting team they should call it the LOCAL STEELBAND FOUNDATION.

After that show, I think that their first order of business should be to recruit an army of EXPATS from all around the world and make a coordinated effort to SELL SOME PAN MUSIC. But first they have to make the RIGHT MUSIC. And they cannot sit down in Trinidad and figure that out -- NOT THAT "BIG ELEVEN" and all their LOCAL COUSINS. That is why it has NOT HAPPENED as yet and most likely WILL NOT HAPPEN!!!

They should call up Salmon Cupid and Bob Diaz (from New York) and the fellah from Boston Village and that Dr. Abdullah who came on here and voiced some opinions and start a discussion with that nucleus.

Here is the problem!!! That BIG ELEVEN is a team of HIGHLY SUCCESSFUL LOCALS who have decided to tackle the PAN STAGNANCY PROBLEM. But they are all looking at it from the INSIDE. And because of their individual successes, I don't think that they are capable of listening to anybody from the OUTSIDE. In their minds they have the GLOBAL GAME all figured out. They do not have a clue as to how many STEELBANDS and PAN MEN it have in place already all over the world -- like you said.

What they do have above ALL OTHERS is AUTHORITY. (And I did try to get that point across to them.) And if they link up with the right EXPATS they could use that AUTHORITY to great advantage. But I do not think that they are psychologically prepared to take advice from the outside.

THAT IS TRINI NATURE!!!