The President of Pan Trinbago, Mr. Keith Diaz, is quoted in the print media of January 10th ,2014* as saying that “unsponsored bands have been taken care of” with respect to prize money for the World Steelband Music Festival 2013. If he said so, then it is an untruth. No unsponsored band has received prize money, as of today.

Mr.Diaz is also quoted in the media of January 14th 2014** as saying that “the only Steelband from the entire festival that is sending all kinds of nebulous letters to the media, here and internationally, is Woodbrook Modernaires”. We are certain that Mr. Diaz does not know the meaning of the word “nebulous”,if he is quoted correctly.

We make no apologies, if we are the only ones sending letters, according to Mr. Diaz. As a matter of fact, if anything, Woodbrook Modernaires may be guilty of remaining silent for too long, while a small group of men, led by Mr. Diaz, exploits the goodwill of Panmen and Panwomen, aided and abetted by a few self seekers, and hustlers, within and out of the movement.

The time has come for pan people to awake from their slumber, and take heed of what is happening in their organization.

Pan Trinbago, established by Act of Parliament, is a public organization, and guardian of the national instrument of Trinidad and Tobago, for all the of the people of this country, here and abroad. Pan Trinbago’s business is everyone’s business. Pan Trinbago receives millions of dollars of taxpayers’ money, every year.

Here are the facts:
1. Pan Trinbago said that they were having a Steelband Music Festival competition. They hosted a launch at the Capital Plaza Hotel, Wrightson Road, and said that over two million dollars in prize money was at stake. Pan Trinbago never told the bands that they were not in possession of the monies. On the contrary, by their words and actions, they led the bands to believe that the Ministry of Arts and MultiCulturalism, had guaranteed the prize money. The competition was duly held (with the conventional bands final at the Queen’s Park Savannah, of all places), and after one month of silence, Pan Trinbago, was no doubt informed that “Modernaires”was about to deliver this letter (see attachment 1) to them.

2. Pan Trinbago hastily issued a letter of its own (see attachment 2).

3. After another month of silence, during which time, the President flew off to dinner in London, and other members of the Executive clique flew to Africa, Pan Trinbago then issued cheques for assistance to the bands. This payment was actually due before the competition. As some bands are saying, it appeared to be a thinly veiled strategy, designed to buy time, and silence, as they tried to repair the damage of their deceit.

4. A “General Meeting” (unconstitutional), held on 9th January, was called to discuss the outstanding Financial Report of the organization, the President’s Report and Panorama 2014. Mr. Diaz chose this occasion, to announce that a note had only just been sent to the Cabinet, asking for the prize money.

We in Woodbrook Modernaires deem this a knee jerk response,as this should have been done at least four months ago.While we are happy that the threat of our letter,has forced a reaction,it is much too late to buy our silence. We wish to state that silence is no longer an option for us, given the general state of affairs in our organization, where mis-management, lack of transparency, and the lack of accountability continue to plague us.

In keeping with our commitment, we are issuing a public demand for Mr. Diaz and his cabal to provide for discussion, without delay, the accounts of the organization, presently in their possession. This should have been done since October. We also call on them, to put out for public tender, requests for proposals to provide the infrastructure for the Panorama 2014 “Greens”, which he has said may cost between “two and three million dollars”.

Today we call on all bands, and pan lovers everywhere, to join us as we begin to confront the situation which has taken root in Pan Trinbago. We serve notice that we shall continue to speak against acts of deceit and deception, when they occur.

Since taxpayers’ funds are involved, we demand that there be transparency in our financial dealings! 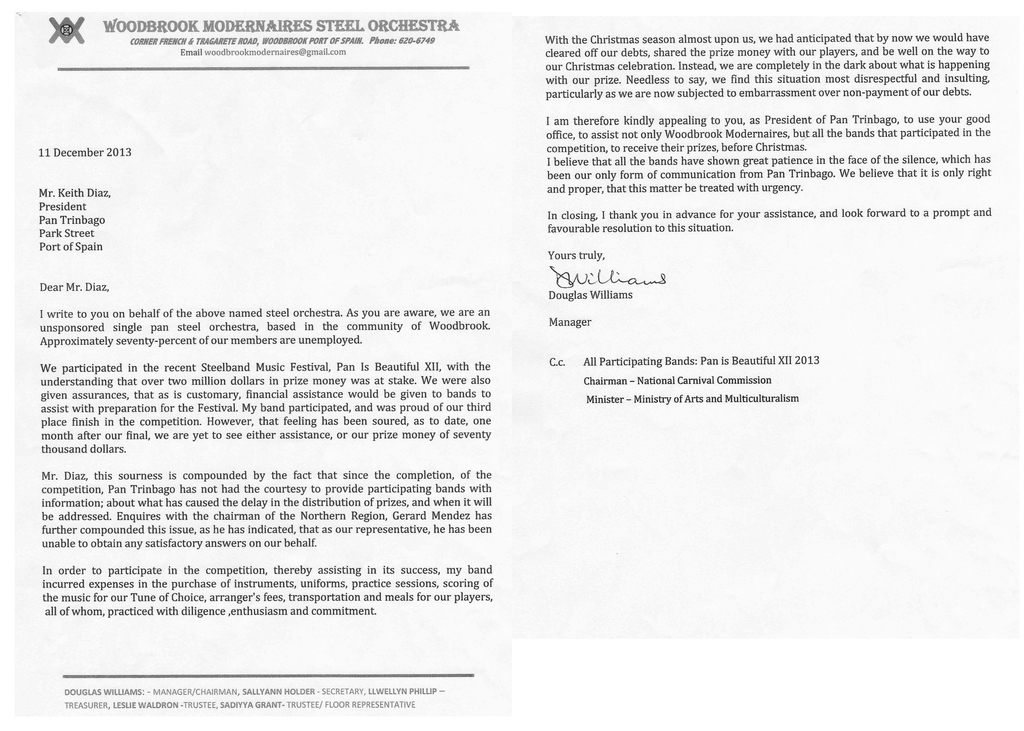 Above is attachment 1 sent to Pan Trinbago on the 11 December 2013.

Attachment #2. A rushed letter from Pan Trinbago dated 10 December, to Woodbrook Modernaires on learning that the band would write a letter of complaint as at attachment #1. 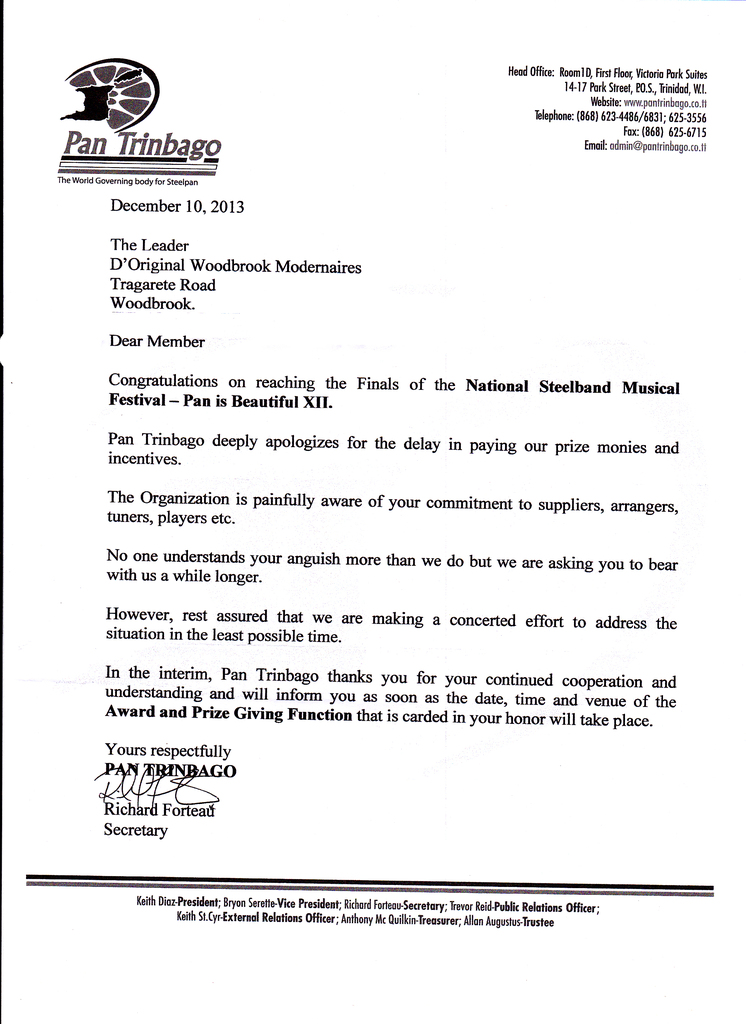 I have said it on Numerous occasions that the Steel bands of Pantrinbago has to get rid of this Pestilence ''Keith Diaz. He is Very dis honest and destroying the Movement. What are they waiting on?. This man is living off the 'Blood -Sweat and Tears of the Pan People. Wake up Folks The time is NOW.

Honesty, Integrity, Transparency, Accountability???? In the movement? In steel bands? Everybody and their bro./sis live off the Blood, Sweat and Tears of Pan People. It is what it was and still is.

Its time for WE the members of WST  to take a Positive stand against the injustice meted out  by Pantrinbago /Mr Diaz and his followers,,,to date there was and still no positive response sent to WST   with relevance to all of the negative accusations, just silence on their behalf,,whatever one  puts out ,,that they shall surely receive,,i am not here on this website for the purpose of sending negative vibes  I am here to support all Panmen and Panwomen who are being robbed of their dues,priveledges ,,neglected,and are being looked  down upon,this is not the time for us  on WST to remain silent and not being truthfull in condemning Pantrinbago/Diaz,,  I may  be the black sheep ,,but!!! there is one quality I do posess and that is to be upright ,,straight forward and being truthfull,, there is only one right and one wrong,,,the New Visionaries has published their findings here on WST for the benefit of all to read and digest,,Diaz must leave,,Bow Out,  Gracefully,,,,,  observation,,,,those of us who tend to remain silent are not commeting  and supporting this just  call for the removal of Mr Diaz ,,the time is now,,in closing,,,,THE   PEN  IS  MIGHTER  THAN THE SWORD,,,this forum can and will do wonders for the benefit of all Steelpan  men and Steelpan women,,my respect to all on WST. God Bless.

Stop this crap now, all bands need to boycott the panorama 2014.

Steve: I agree with you on the BOYCOTT. But the VISIONARIES lack the leadership and political skills to pull of such a coup and leave Diaz penniless for the next year.

Claude !I did mention this early last year ,,,Boycott,,,,,even though  my plan was to  suggest the same much more earlier,,   But no one on WST had responded,,??? further,,no one regards the input of the Panmen  and Panwomen for Panorama,,only when its approaching the month of February every year,,,well ah gon seh   it once more,,if no pan aint deh ,,then yuh aint got no Panorama,,,,and those in high places that is lending a deft ear ,playing as they aren't aware of  whats going on ,,WOULD  WAKE UP IMMEDIATELY,,,,,,,nuff respct.

Steel band men in Trinidad dont have the Guts to rebel against Pantrinbago and Mister Diaz knows that. He and his Cronies has manipulated its members for years, they know that and wont do anything about it. Its a blasted shame that there are so much Gut less Steel band men in Trinidad. Another thing that I cant understand. He was the Leader of Starlift, a West band for many years. then out of the blues he goes up the Hill by Despers and becomes their P.R.O. One Year after he is the President of Pantrinbago. What a Big Joke.

Two quick questions to honestly ask yourselves, and answer, even if in silence:

All of a sudden, people using words like "boycott" and "distorted"; COIN WORDS used by the Ghost since 2011! So, ideas that I presented, are repackaged as novel, and credit goes to those now jumping on the bandwagon. I have been in the trenches from DAY ONE, while most were on WST socializing and making friends. So, while you all are now coming around, I am pleasantly satisfied. (No need to give me credit; our efforts are time-stamped, so that ALL can see the source of much of these "new ideas". smh.)

Ghost, who is the ONLY steelband leader to lead the steelbands to boycott, and what year?